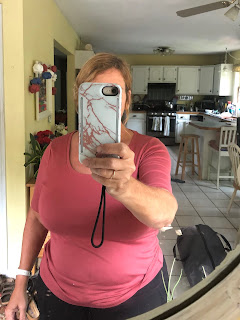 So, I did gain three pounds on my Norwegian vacation, and I protested loudly, to no avail. I ate mostly one meal a day, but shh, I did have heavy cream in the coffee, and ice cream those two times...one time didn't count, it was a scoop in my coffee, which melted of course, so I drank it, which was not entirely horrible, but not as satisfying as actually eating ice cream. So I asked that those calories be deducted, but my stubborn body didn't even listen to me.

But, I am only two pounds over what I was when I left, so that's not too terribly bad. I'm back in the game, too. Very low carb, no sugar, except for one square with dinner on Monday night. So I'm down 11 or 12 pounds, and I think I've lost a few inches. I don't feel as bloated, and have a bit more energy, so I like it. Surprisingly, I can go all day without eating, just fine! It makes life easier. I don't have to decide whether I want something or not, just put it off until later. Then when I eat my dinner, I have meat and veggies, and feel full and satisfied. If I want to, of course, I can have lunch, some eggs, or whatever, but I usually don't feel the need.

I know this isn't for everyone, but I think I'm super insulin resistant. I've tried low calorie, and my metabolism tanked. I tried regular Keto, and hit a plateau. So I don't go out of my way to eat extra fat, as in regular Keto, because heaven knows I have enough body fat to last a few years for fuel. I take my magnesium and potassium, and sometimes have a bit of salty water, to replenish electrolytes. I am trying to have half and half only in my first cup of coffee, as I suspect all that heavy cream in Norway may have been an issue.

The idea behind intermittent fasting is to get your insulin levels to drop, to get your body to switch to burning fat instead of sugar. When you aren't eating, your body isn't just going to die. It's going to burn your fat. For some reason, regular calorie cutting decreases metabolism, but intermittent fasting doesn't. And I HOPE it doesn't, I hope I don't find out this is all a big trick, and for the rest of my life, I'll gain ten pounds immediately if I just look at a glass of wine.

Oh how I rant and rave about losing weight. I read success stories, and I think it'll never happen for me. I've tried and tried, have suffered and passed up so many yummy things, you'd think I'd be as skinny as a rail. I have been tempted to feel sorry for poor me, because I'm broken. But: I am not giving up. I want to feel better, have more energy, live to see my kids grow up, be able to keep up with the grandkids (and Paul! He is the Energizer Bunny himself!)

So I decided to give this IF a good try, until Christmas, and see what happens. I will still go on my wine tour next week, and get right back into things the next day. :). (I know what you're thinking, but that's okay. I'm going with some of my daughters, and they are just the BEST days.)

Anyway. Packing for camping. How in the world can we possible NEED so much stuff for THREE DAYS?!!! Laura and Mary and Pa and Ma and baby Carrie didn't need this much stuff in their covered wagon for their entire prairie life! 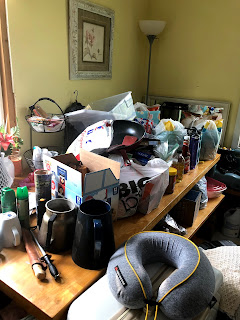 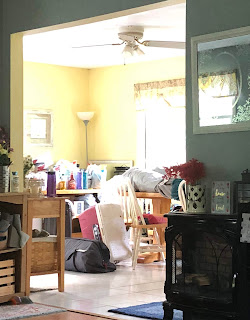 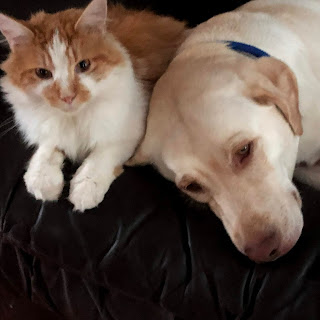 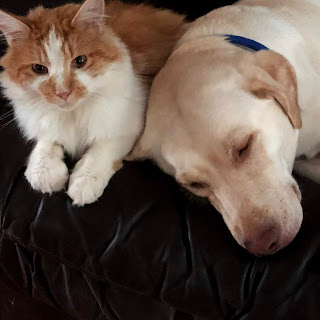 And these two, just because...because they're cute. I didn't capture Sunny washing the Orange Guy's face, I didn't get up fast enough. They are just friends, plain and simple. I don't know why it tickles me pink that they like each other so much.

So here I sit, innocently blogging. There are more sleeping bags to throw in the washer, and there's a pasta salad to make. My jet lag has been sweet and advantageous, as I wake up with the sun, and get moving. Well, shh, I lie in bed and scroll through twitter, but still. This fine morning, I've been outside, backwashing and turning on the pool filter, weeding the garden, picked four little grape tomatoes, there are ten now on the counter to go into the pasta salad, and there may be a few green peppers too. I've put the pork in the crock pot, all seasoned and sprinkled with lemon juice, and shh, some of a can of cherry Pepsi I found in the back of the 'fridge. I washed a sleeping bag and hung a different one out to dry on the deck. So I haven't been entirely lazy. I am on my second coffee, this one with no cream, and it's not killing me, but blah.

I have to get our van window taken care of, it's open a few inches and stuck that way, and there are bears in the Adirondacks. We store the food in the van, the window has to be closed.

I also want to get over to visit grandma, Paul's mom. She is turning 90 next week!

And, my suitcase from Norway is still sitting there in the kitchen. I rooted through it, and washed all the stuff that needed washing, most of the clothes in there weren't even worn, I am an overpacker. But it has to be unpacked and put away, so I can overpack for camping.

My huge-0 air mattress is out there on the table, it's the kind you just plug in and inflate. It's really big. It takes up half of the 8 person tent. I am the Princess-and-the Pea, for real. Last year, I couldn't even keep a straight face when I complained that camping is not so comfortable for sleeping, when all the kids sleep just in sleeping bags on yoga mats and foam puzzle floor squares. I have to remember the extension cord so I can plug it into the minivan and inflate it. Paul isn't coming up until Friday, so I have to do all the camping set up myself, with the younger girls.

And if you're still reading this, wow, I am starting to bore even myself. It's a huge form of procrastination. I wish I could do this for money, you know? Get paid for what I like doing...anyway, bye for now.
Posted by 16 blessings'mom at 9:28 AM

Well, I snorted a couple of times. As in chuckling, not sleeping.. I saw how much thinner you looked in Norway.. and it seemed like every time I saw you, there was less of you, for sure. I lost 5+ pounds there, probably from the walking 😉but only my ankles look thinner 😂😂😂. I did have a bubble waffle ice cream on the last night.. good thing they are not sold here, I'd be huge 😉😂😂😂
Cheryl

You can make money, just switch to vloging.

God's blessings on you with your dieting progress! And no, you could never bore me! I'm about to hop on and blog myself- you inspire me to just share what is going on, because it is interesting to others:) Have a nice trip!
Valerie from Ohio

Oh how I would love to make money from doing this as I completely enjoy blogging! I am not sure I could go without eating. I truly need to as I have gained so much weight this year, but I just enjoy eating.