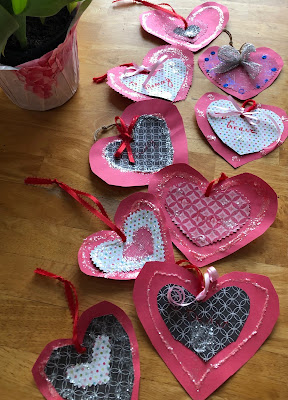 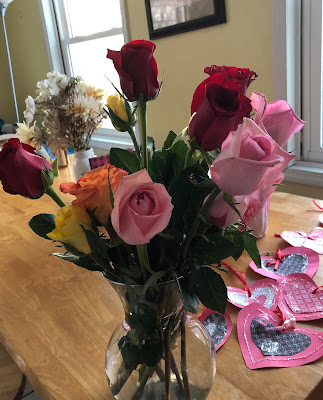 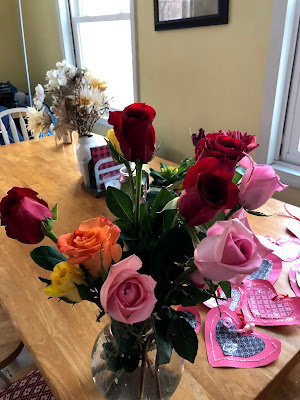 Anne and I made Valentine's cards yesterday. She LOVES glitter, and she has a very long attention span for being only three years old.

Samuel is here with little Grant. They arrived during the night. I told him that I'd take care of Grant when he wakes up so Sam can get some sleep after that long drive, but I am guessing Sam will be so excited and happy to be home that he'll just have some coffee instead.

I'm kind of excited too. It's a little chaotic when all the grandkids come over, but it's filled with adorableness and hugs, and I love it.

Sunny is doing a little better, she gradually improved as the day went on yesterday. She didn't throw up, was drinking water at regular intervals, and would take small dog treats, but turned her head away from the canned food from the vet. It seemed like she would only eat the treats reluctantly, and only when I called Suri over and acted like I was giving it to Suri, so she would take it and chew it so slowly. She slept most of the day, then when Paul got home, she ate a little of the food for him, then a little more later. She's still not back to her normal self, but much better. Thank you, seriously thank you, for all of your prayers and good thoughts. God made dogs, whether you love them or not, some of us really do. It can border on insanity, the love people have for their pets, but love is love, and it saves so many from loneliness. I happen to believe, with all of my heart, that having a nice sturdy dog who loves being hugged and pet, is therapeutic, for teenagers, kids, old people, but especially teenaged boys, who still need affection but are awkward. Our dogs are a huge pain in the hind quarters sometimes, but they make up for it with the tail wagging and happy faces. Their ears move forward if you ask if anyone fed them, and they tilt their heads. We got the leash out to bring Sunny to the vet the other night, and Suri came running, so happy, she thought she was going bye-bye too. And don't even think about getting the peanut butter jar down with them coming running. They are always glad to see you, even if you just re enter the room, unless they are snoring, of course.

Anyway. I am thankful for them, muddy paws, shedding, barking and all.

The sun is shining, but it's only like 9F (-12.7c) here this fine morning. It's beautiful, as we got more snow last night, and the trees branches are sparkling in the partial sunshine.

I should be sweeping the floor and washing up the few dishes in the sink, or putting in a load of towels, shouldn't I?

Oh, in other news, I did lose a tiny bit more weight. It's sloooooow going, but, it is GOING!
Posted by 16 blessings'mom at 8:18 AM

Hi Della 👋 You will have a fun, busy weekend. Enjoy! Your flowers are beautiful 💗 and so are the Valentines 💗 I’m glad Sunny is improving.......poor sweet girl. Try feeding little bits of the canned food off a spoon. Yes, pathetic, but she might take it that way. I’m with you on loving your dogs. I can’t imagine not having dogs....really......yes, muddy feet, fur all over, but such adoring looks at us, cuddling etc. I have a friend who is not a dog person and to me her house is soooooo sterile and dead.........just my opinion of course. Enjoy little Grant this weekend! Lovely to have them visiting. Have a great day!

Beautiful flowers. I’m so happy that your pup is n the upswing even if it’s very slow. Dogs certainly are a blessing.
Glitter! You are a good one to allow it.....I’m against it inside in the house. 😜

That's such good news about Sunny. I've been thinking of her off and on all day. Glad to hear she's on the right track. And I totally agree that dogs make the world a better place to be! Love them!!

Glad for your doggie happiness...