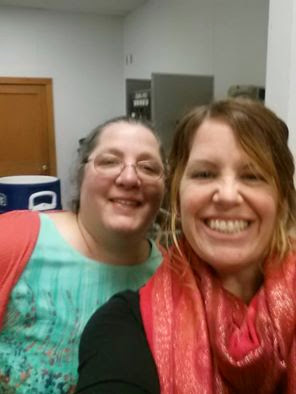 I don't know if I can explain how much fun we had this weekend.

It was so nice to have the time with my friends, some of us decided that this coming weekend will be perfect for our randomly chosen next hotel night. 5 or 6 or 7 of us will get together and oh dear, do we have a nice time. The pool, the hot tub, some laughs and of course some encouragement for each other. Life isn't always easy, and we aren't getting any younger. We need each other, we friends.

It is really cold tonight, around zero. It is chilly in this house, too. I have socks and slippers on, and a blanket over me, and my feet are still cold. Winter may be sparkling and pretty, but it has been long enough, thank you. I guess that's why spring is so glorious, and summer....oh I do love me some summer. Just thinking about going barefoot in the garden, picking cherry tomatoes and eating them, all warm from the sun, never mind that Duke sometimes follows me around the garden, stopping here and there and lifting his leg. blah. Anyway. Summer. What a thought.

I made some really good chicken soup for dinner tonight. From the two whole chickens I roasted the other day, I saved all the nice gravy/broth/pan drippings, added some water, lots of chicken, then later some sliced carrots, then some cubed potatoes. Simple, and so yummy, especially on a cold night. Some of the kids ate bread and butter too. We forgot to eat the brownies, how can we forget those? I put them up out of reach of the bad puppies, who get into things in the night, and almost pulled back the foil and sampled one, but then I remembered what would happen if that taste proved to be too yummy. Oh, that plate of brownies wouldn't stand a chance. Okay, I wouldn't eat them ALL, but let's just say it's better if I don't even go there.

Last night, I hardly slept. I forgot that even when I'm tired, I don't sleep well when Paul's gone, especially the first night. I don't know why, I am just totally and completely conscious of the emptiness of the bed. Don't get me wrong, I like that I can toss and turn and read without disturbing anyone, but for some reason, I just feel like the world isn't right.

Today some of us were talking about the good old days when dinosaurs roamed the earth, in the seventies, when I was growing up. We hardly had soda or chips back then. We had a dinner with meat on pay day, you know, a whole chicken leg or a nice pork chop. The next two weeks until the next pay day, we had meat IN our dinner, but not a whole portion. We also had things like scrambled eggs for dinner, or pancakes with corn in them. Or hamburger soup. It looked like dishwater, but it was pretty good. My mother made spaghetti by boiling and draining the pasta, adding some cooked burger, and a jar of spaghetti sauce, then a jar of water...right to the pasta. Voila, a big pot of spaghetti. It was good, especially leftover and reheated. Sometimes, when the days ticked off toward the magical pay day, we would have something like tuna fish and mushroom soup over toast, which I totally despised. Blah. We never starved, but...

Anyway. When I was a kid, we didn't have constant supervision like kids do now. We lived in a neighborhood, and when we got home from school and changed into play clothes, we went outside. We met up with our friends, we played in the creek, we rode our bikes with bare heads around the block, we played jump rope and kickball. We climbed trees and built forts and sometimes went to someone's house, a house with no parent home, and made prank phone calls. We walked to the store, we made those funny chains from gum wrappers, back when each stick was wrapped in foil AND paper. Hershey bars were, too. We made boondoggle bracelets.


Anyway, times have changed. I absolutely hate how addicted kids are to their electronics. It seems like they are born with their faces glued to a screen. Small children should be looking at their surroundings, reading other people's expressions, forming ideas about the world around them, not just playing with their Mom's phone. It has gone out of style to look out the window when driving in the car! Heaven forbid they should get bored! Isn't that where daydreaming comes in?

Blah, I am getting old. Technology has a time and place, but I sincerely believe there should be limits for kids. We, as humans, naturally choose the path of least resistance, and the iPod is easier than getting out a deck of cards to play solitaire, or actually playing board games or hangman with gasp, a pen and paper. Trivia Crack is the latest thing around here. We can be carrying on a perfectly good conversation, and Sonja will ask, "Who won the World Series in 1976?"

What I really hate is when there are ten or twelve of us sitting around the living room, and everyone is on a tablet or computer or iPod. Seriously? Thankfully we all agree that sometimes it's good to just say Put Them Away, and have real conversations.

Sometimes I really, really miss those days Every time I see a new electronic gadget in the store for babies it just makes me cringe. I read that doctors say a baby should not watch ANY tv, that you literally should not have a tv on in the room when the baby (up to age 2 I think) is there and I think how extreme that is, but then the flip side is programming especially for babies and "learning games" for babies which just defies logic.

I remember Saturday morning cartoons as the most tv viewing we got all week! After school we went out to play, not veg in front of a tv watching inappropriate shows or spend 5 hrs texting our friends. We were also not enrolled in 20 different after school activities to make our parents feel good. I was in Brownies one year and 4H to learn to sew (which I hated) for 2 yrs thru our church. I did play softball a few years but that was a HUGE reward for getting straight A's. I don't think it cost anything, but my parents had to drive me to games and that was a huge expense for our family.

We didn't have privacy - and there were only 5 kids in our family. No phones of our own, just the one in the kitchen (with a ...gasp.... cord anchoring it to the wall). When mom said get off the phone, you did so - immediately! My kids have friends as young as 1st grade with their own phones because mom and dad are divorced and the non-custodial parent wants access to that child 24/7. Our parents went to the store and we stayed home and couldn't call them 18 times to ask a question or interrupt their time away.

The biggest drawback to technology is the constant need for stimulation. Some of my kids act like they're dying if they're not being entertained every waking moment and that just stinks. I remind them often that I am not on this earth to entertain them and that if they are that bored I can surely find chores to keep them busy. All this because I won't cave in to the "everyone has one" mentality and I actually make them earn things thru responsibility and trustworthiness.

Hi, Della! I'm your older sister by 10 years, and those really were the good old days!! Technology definitely serves a purpose, but like everything, moderation is important!! It is hard to limit access, but it seems wise to me!! I think Lisa's on the right track, as well!! And here I sit on my tablet..oops!! But, if my mother was here, I'd be giving her my full attention!! And anyone else, too!!

Such a good post!!! Struggle with same issues and forever tirn as to where and how to draw the line.
Do you set limits ? How do you handle it with time and content limits?
Simone

Yes, the good old telephone-anchored-to-the-wall. Ours was worse, a little black rotary dial model, sitting there with it's short, privacy hating cord. As a teenager, I could make that cord stretch a few feet but when a boy called me, basically the whole family heard my side of the conversation. Simone, I do set limits for the younger ones, who homeschool. No tablets or computer games or video games during the school day, unless we are researching something. And that is until 5:30, which Jonathan imposed himself, because he knows how he loves his Mind Craft, and doesn't want to be tempted to rush through his work to play. Anyway, I sometimes make exceptions, like if they come in from playing in the snow and are exhausted, we might watch an afternoon movie with some cocoa. The older ones...I just give suggestions, and encouragements...none of them have a phone, just iPods. I am not paying cell phone bills. Non-essential. If they want one, they have to buy it and pay the monthly bill, so none of the kids who live here have one. We have internet, so they can use their snap-chat, ect.

Thank you for replying! Bless Jonathan, how mature and gorgeous is that, he knows the temptation is big! My ten year old boy is the same, loooves Mindcraft. I will sometimes, on weekends, suggest to him at bedtime if I should keep the remote of the PS3 and his ipod in my room so he isn't getting up at the crack of dawn to play and God love him, he often says yes.
It is important to set limits but of course there can be exceptions. I often say to my kids it is because I care that I set limits ;)