The small children who visit me during the day are delightful. They share nicely, and never ever grab things and say things like, "MINE!". No, they really are sweet, and I know it's normal to have those little tug-of-wars over things, and it's good for them both to learn to get along. They like to play with playdough, and duplo blocks, dollhouse stuff, coloring, and playing with the toy food and dishes and dolls. They really like going outside, too, which is what I plan to do with them today, as it is going to be 60 degrees out. Yesterday, baby Lydia was here too, baby Lydia had just had a boatload of immunizations, so she was borderline fussy. But Auntie Evelyn got off the school bus and took over, had her asleep in her arms in no time. 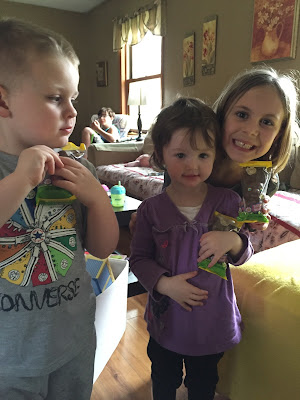 Davian, Annika, and Camille...Jonathan had hidden chocolate bunnies and plastic eggs with candy, for them to find. 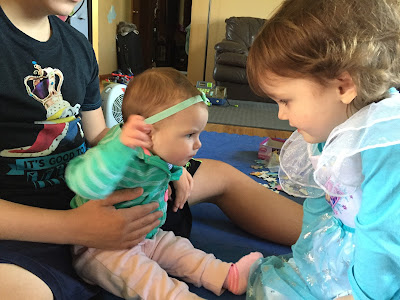 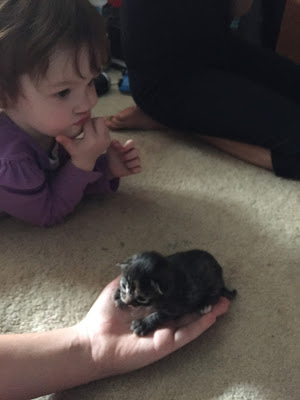 She likes the baby kitties...yes, we have four new kittens... 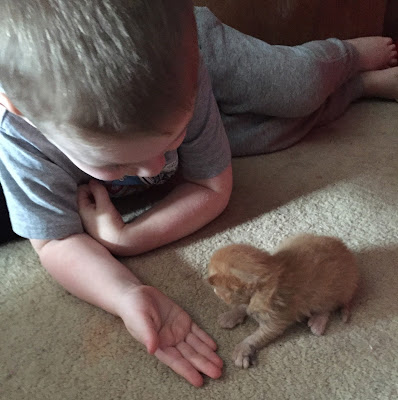 Davian knows to be gentle with the kittens...

Yesterday was Kim's birthday, she didn't have any little grandchildren to babysit, so she went out and about with her youngest four, and stopped in for coffee and a visit.

Mirielle stopped in to pick up Suzanne for a chorus practice, and because she knew Lydia was there and wanted to sneak in some baby hugs.

I miss Grandma. We had a good time just talking. And of course the nice warm weather...I miss that too. It was also rather nice not making dinner all week, or sweeping and mopping and housework...

Anyway, when all the older kids left for a meeting last evening, and my little friends had gone back to their own homes, I was left with just Char and Cam and cousin Danielle, and baby Lydia...(and Paul). The girls had this recipe they HAD to try, to make homemade lip gloss...coconut oil and a half a crayon, melted over a double boiler...we have lots of plastic Easter eggs to put it in, and they really wanted to make it. Well, I said, I want to help you, but Lydia here is a bit fussy, and wants Grandma to carry her around...so Paul made it with them.

After they went to bed, I rocked my little granddaughter to sleep, and sat here with her, enjoying every minute.

Her daddy picked her up at almost 11, so it was indeed a full busy day.

This fine morning, I went on my walk, with Suri. My new mantra is like Nike says, "Just Do It". I don't have to wait until I feel like it, or I would never go. My other new mantra is, "Just Don't Eat It". But, the chocolate bunny longing is gone now, since I finally had a little taste of one that the girls were eating...it was nothing like I remembered...it just wasn't that yum. Reeses' Eggs, Hershey's chocolate candy coated eggs, Hershey Kisses, now THOSE are good! And I already know that, so I don't have to eat one just to make sure. Thus the saying, Just Don't Eat It.

Life is too short. A family we know from way back,lost one of their grown daughters on Easter Sunday. They have already suffered the loss of a son, in his early twenties, a few years ago in a car accident. I didn't know Maria well, but was friends with her on Facebook, and my older kids knew her. I am so sad for her family right now. Knowing she's with her baby brother is comforting, but still...her poor parents, and siblings.

My little sweetie Annika is going to be here soon. She just loves Jonathan, and I usually wake him up before she gets there, but he didn't get home until like 2 a.m., he went to New York city with a friend to pick up a friend from the airport, yesterday. And the little girls have their cousin over, so they stayed up late...Annika is going to want to wake them up:)