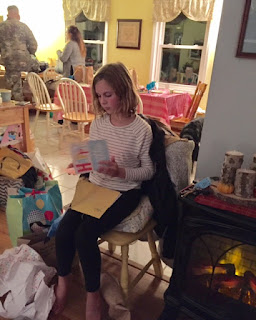 Happy Birthday to Camille! In the background is Samuel, just came back from his weekend with the Army Reserves...he is talking about being deployed to Africa next year...spend his whole time in the regular Army in D.C., at Arlington, all safe and sound from being sent overseas, then joins the reserves... 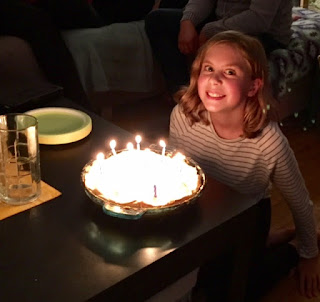 Cam requested lemon meringue pie for her birthday. Okay, I thought, how hard can that be? Lemon pie and pudding mix would have been the smart option, with my homemade butter pie crust...but no, I had to go totally scratch, with the lemon juice and the cornstarch, and it was really good...too sweet and not tangy enough, but Cam loved it...I made two, and it took way too long, especially because you can't make just two pies, we had to have two pumpkin, too. By the time I got done cleaning, and making those pies, I decided the roast beef in the crock pot was going into the refrigerator for tonight's dinner, and we were ordering pizza. We had around 23 people for dinner, and I did not feel like going with my original plan, which was to peel, boil, and mash 10 pounds of potatoes, make stuffing, and veggies, to serve with the beef and gravy. I just didn't have it in me. I wanted to enjoy Ben and Ashley and little Anya and new baby Elise...I wanted to enjoy Mali and Lydia, and talking to Margaret and Adrian, and Emily and Abigail and Mirielle...and Sam came home from his weekend...it was crazy enough with six pizza boxes stacked up and the help yourself thing...I also cut up celery, cucumbers, carrots, and peppers, and had nice little prize bags for the little kids.

Anyway. Our hot topic of discussion was this: to rent the same camp this year, right on the water with the delicious dock to jump off of, or to sit and bake in the sun on...or a huge camp we found that has 8 bedrooms and an industrial sized kitchen, with a game room...it's just in a field, surrounded by woods...not on the water...but in the Adirondacks, one would have to drive to go fishing or swimming. But it would fit us so much better. I am SO leaning towards the camp on the water, I am supposed to be sending the deposit in today for it....the bigger one is more expensive, but still within budget. It's like one of those shows, Ben and I keep texting each other the pros and cons...with a few more babies being born into the family, we will be bursting at the seams in the lakeside camp. A few of the older kids will have to rent hotel rooms in town and commute. But the big camp will fit us all. But. We won't be able to just go jump in that freezing cold lake whenever we want, or just take the kayaks out, or go fishing in the boat whenever....I am not a decision maker in any sense, I go back and forth, and when I finally make up my mind, I jump right into second guessing myself. It's bad. Most of the kids agree to the big camp, it allows dogs, which is a deal breaker for Char. But. A few of them are like, NO WAY. There is NOTHING in this world like waking up and sitting out on the porch with a cup of coffee, and listening to the loons...just watching the water. And the sunsets up there, oh dear me.

We can drive to beaches and lakes, drive to places...and we'll have fun. The big camp has a huge-O stove, like the kind in my dreams, and an industrial/commercial refrigerator. There is seating for like 30 people, and so much room to rattle around in.

If we don't love it, our week at the original camp might be hard or impossible to get back for the next year. So it's a gamble. Part of me says to go for it, it'll be new and different and we'll all be there, so how can it be anything but fun? Margaret says she'll bring a little pool, ha.

I bought a new stroller. I still love strollers. I found one in T.J.Max for $150, but I behaved myself and didn't buy it, even though they sell for $400 elsewhere. (City Premier by Baby Jogger) I reasoned that it would be nice to have for the grandkids, and for when I watch Anne. But no, I resisted. I went to that store a few more times, and dang it, it was still there. Well, on Saturday, I went there to get a gift for Camille, and lo-and-behold, it was there, and when I tried to resist, what???!!! There was a RED tag on it! Upon closer investigation, wow! It was marked down to $90! Did I NEED it? Heck no! But for $90, yes. Yes, I needed it. I put it in my cart, and when Evelyn rejoined me after shopping in the shoe section, she just shook her head, and snapped a pic for Sonja.

It's for Margaret. That's a good thing. She did already buy one, but a different one. She's twenty weeks now, and this stroller will be great for her, as she can get a bassinet for it and make it a pram.

Kittens...we are giving away the kittens...one lady wants two for her two little girls...then there is one left to give away, since we are keeping one little orange guy, making our cat total three, which is just this side of crazy, in my mind.