-13.3c. Brrr. Jack Frost has decorated the glass on the door, and the snow crunches underfoot. The sun is out now, but more lake effect snow is coming later. Hopefully AFTER I pick Paul up from the airport, he's coming home from Boston this evening.

Anne is coming over in a little while. I had too much fun yesterday, Emily brought Jonathan, Char, and Cam ice skating. I was here with Anne, who turned a year in September, and Lydia, who turned two in August, and I just realized that I had kids who were 14 months apart, how did I do it? They were really good, but oh dear, it kept me on my toes. Anne seemed to be watching for me to forget to watch out for my glasses, my coffee, or my phone, but I was just a shade quicker than she was, although she did manage to swipe my phone a few times. I had to trade her for something good to get it back. The two of them got along just fine. 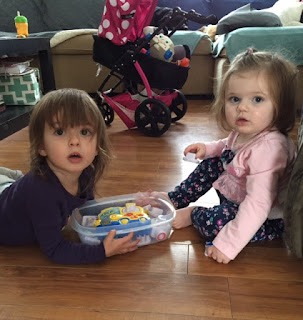 That stroller in the background was Lydia's doing, she loaded it up with stuff. She took the two Christmas towels from the front of the stove, and referred to them as, "the red and green paper towels." She knows her colors, her numbers, and we had at least ten phone calls back and forth, she called me from the Fisher-Price Chatterbox telephone, and I answered on my phone. She would ask if I was coming home soon, and I would say yes, do you need anything from the store? After a brief conversation, she would say, "goodbye!", then call me again. Over and over again.

After Lydia and Anne went to their homes, and the skating kids were back home, and things were all settled down, Evelyn and I went to the grocery store. And to Walmart, for a few last minute gifts. One of my sons asked for, "All of the pillows.", for Christmas. So I got him three, and three pillowcases, which believe me, the guilt of BUYING pillow cases! I can make them, and heaven knows I have bins of fabric! But the sewing machine hasn't seen the light of day in quite a while. I do not know how I stay so busy. But I do.

Anyway. I stayed up late last night wrapping stuff, and I have washed the Christmas stockings. I am excited about Christmas...Paul's gift is stuck in Chicago, it was supposed to be here a week ago. I was really hoping it arrived while he was out of town. I hope it makes it on time. I can't tell what it is, even though I do not think for one second that he reads this blog, ha.

Hi Della........those 2 little girls are adorable and yes, we can see you would have been exhausted 🤣 Your weather is colder than me and I live in central Alberta! Yesterday we were about +10C here. Imagine! We haven’t really had anything too bad yet except for one about 5 weeks ago. Pretty nice. Of course it could change next week and be -30C😉 I hope your parcel for Paul arrives soon. I have a few things I’m waiting for delivery too. Have a great day! I’m baking........