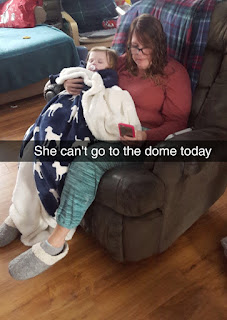 This was the other day when we watched little Anne...she got tired, so I rocked her in a snuggy blanket. :) Em posted it on the family chat. But alas, I had to get up and get ready to go work the basketball game, and her mama and daddy came to get her... 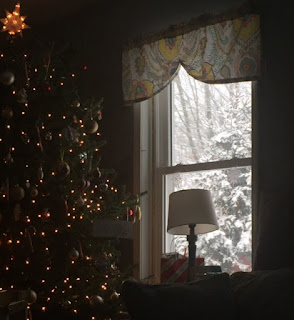 This is from right now, taken from my comfy chair...outside, snow on the trees, and it's cold out there! 4 degrees (-15c), but much warmer than yesterday, which was -5F (-20c). Either way, it feels like you have no pants on after five minutes of shoveling off the deck steps. 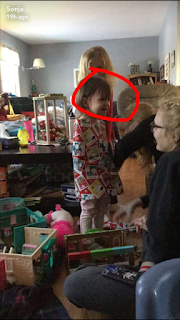 A random pic from the other day, Suzanne playing with Lydia "Lydster", and Anya. 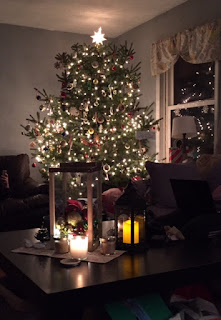 Last evening, we had lasagna for dinner. It was so cold, we decided to just eat in the living room, where the little fake fireplace makes it seem warmer than it is, and the couches and the rugs and the candle and the glowing tree make it cozy. It was only Paul and I, Joseph, Kathryn, Evelyn, Suzanne, Sonja, Jonathan, Char, and Camille. Their friends Toby, Timmy, Zech, and Amanda had gone home. When it's only us, we rattle around like peas in a pod, like the book, "The Cow in the House", by Harriet Ziefert, which I do recommend you read. (Plot: Old woman gets complain-y that her house is too small while she rolls out noodles. Husband, the farmer, gets advice from wise man to bring the chickens into the house. Then the other farm animals, one by one, while the wife complains how small and crowded the house is. Finally, even the cow goes into the little house. Then the wise man asks if the house is crowded, and the farmer answers that if his brother visited with his ten children, all steps and stairs, things would be really, "higgeldy piggeldy". The wise man said he was making progress, and advised him to start taking the animals out, one by one, and when the cow was finally out of the house, the wife announced that the house was really nice and roomy. So. When all the company leaves, and it's just us, it's like getting the cow out of the house. ha.

Yesterday, I did go out and about, with Emily and Evelyn. Em and I needed to buy some khaki pants, so we were headed to the thrift store. See, on New Year's Day, some of us are boarding a bus at an unGodly hour, and heading to New York City to work at the Citi Classic Hockey game, a fundraiser for our church, and the dress code requires khaki pants, which may not be a prob for most people, but I hate khaki pants and did not own any until yesterday's purchase of a pair for $4.99. We also have to wear black shoes or boots, of which I own neither, and since I have extremely picky feet which aren't comfy in anything except for my five year old Adiddas bright blue sneakers, I was most surprised and delighted to pick up a pair of Grips, new with the tags, black galoshes for over the sneakers.

Now this adventure is interesting, this bus trip to NYC. It's like five hours, and we have to arrive at the parking lot where the bus will depart, at 3:55 a.m. That means leaving the house at 3:00 a.m., which means getting up at 2:30, 2:45, which is what time I usually go to bed on New Year's Eve. I won't be able to fall asleep any earlier than midnight anyway, on vacation like this with the kids around. So after two hours of sleep, we'll be headed on a bus, in record cold temperatures, to work at a stadium....OUTSIDE. Well, no one can tell us for sure where we'll be working, and for some reason we were all right with this, and since the hockey game is taking place in a baseball stadium which is being adapted for hockey, the food kiosks are technically outside...and it's going to be freeeeeezing cold and windy. How, may I ask, am I supposed to take money and give change, with freezing hands? Fingerless gloves have been suggested, but then fingers are exposed, and my old-lady hands don't work in the cold. We have to wear a shell, or outer jacket, which they give us, and our own winter gear underneath, so we will dress in layers. I am thinking leggings under the khaki pants. Someone suggested long johns, but this old mama isn't outdoors-y enough to own a pair, and I am not investing in any. Anyway.

The thing about this adventure is that only SIXTEEN people signed up for it...Paul and I, Emily and Abigail...Evelyn and Ben couldn't because they didn't take the required alcohol training course because Ben was still out west when it was given, and Ev was still 17 then. Kathryn has to work, so she isn't going.

We will take the bus down there, work where they assign us, then back on the bus for the long ride home. I am hoping we have fun, we don't get bus sick, or hypothermia. I'm sure it will end up being fine. Some of my older kids are going to make it nice for our littler ones on New Year's Eve, and on New Year's Day too.

Anyway, our trip out and about yesterday was worthwhile, we got our khakis, and I found a mint condition Wii game for the kids, and a nice white bowl, and was able to use a $7 off a $25 purchase at the thrift store, which is always fun. We grocery-stored, and then stopped into Aldi quick for some nuts and bars for the bus, and scored Hershey Christmas kisses for $1.47 a bag. When you live in a house full of girls, you can never have too much chocolate.

Today, I am hoping to bring my three high school girls and my three homeschooled kids on a little adventure, to a museum, then out to Chinese....shh, don't tell them, it's a surprise. They have been in the house a lot, and it IS freezing out, but the roads aren't too bad, I don't think. Paul went to work, and texted that the main roads are fine. Ah, winter driving, how I despise thee.
Posted by 16 blessings'mom at 9:56 AM

Oh my stars Della, the New Years gig sounds like a nightmare. I cannot image there will be many spectators in such frigid weather but I guess some people are heartier than I am. Plus, I expect the alcohol creates a false sense of warmth. Well, I will be looking forward to a full report which will be interesting for sure!
I love the Cow in the House synopsis. I always think how we perceive life is all in our frame of reference.

I also despise khaki pants. I feel like I look like I don't have on pants when I wear them. It's not pretty.

I do not envy you being outside in the cold at the game. I think layers are the best way to go. Leggings under khakis for sure, fleece lined leggings if you have them. It's seriously a health issue to be outside when it's that cold out, so good luck.

Good morning Della! You are so brave to go and work OUTSIDE in those freezing temperatures. I am so wussy in the cold weather. It is -31C here this morning 😳 yes minus 31!! this is without a windchill!!! Anyway......I see you had fun with all those little granddaughters of yours........that’s always fun. I am going to clean out my pantry this morning.......it REALLY needs it. One of those jobs I put off till I can’t stand it any more. I hope you have a great day!

its late here della , and i am just now reading. as a cali girl through and through, i have no concept of that kind of cold weather. currently at 9pm i am in shorts and a tank top! i dont know how you do it. God bless and keep you on this exciting trip to the city.