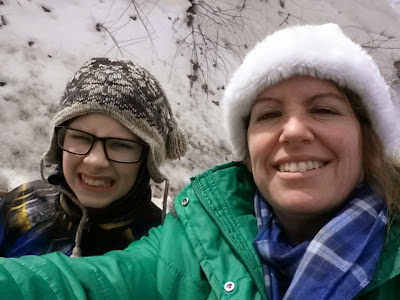 Jon and I went for a nice walk today. It was not freezing out, at 39 degrees, but it was windy and chilly. But very pleasant, with the sun shining on the snow.

I decided that even if I don't feel like it, I am going to walk/exercise each and every day. And, I am not going to snack in the evening, even if it is healthy stuff. No more. And, I am going to cut back on afternoon coffee, wah, because I have been having heartburn. When I went to the dr. on Monday, the N.P. I saw suggested my sore throat was caused by acid reflux. blah. I would rather change up my lifestyle, and see if I can fix things that way, than pop antacids again.

There is nothing worse than waking up in the middle of the night and having that burning feeling. not fun.

Anyway. I need to get into better shape so I feel better. I have been arguing with myself about these things, you see, and I decided that I need to just do what I need to do, rather than wait until I feel like it. Because lazy me ain't never gonna feel like it. 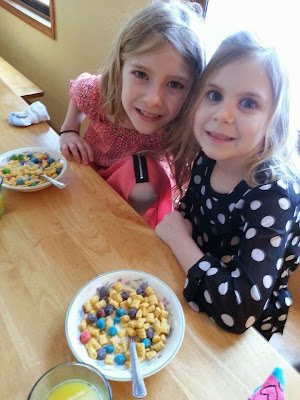 And, here are the little girls this morning having breakfast. Yucky Cap'n Crunch, they like it, but I would rather feed them Life or Chex. Cereal last lots longer now that Sam is gone, but he would hate me saying that.

Today I picked the girls up from school a bit early, along with their cousins Sean and Danielle, who are also in first and second grade. They had big pretzels and cocoa, then started in on playing...Jonathan has been playing with Sean, and the girls are playing massive house, which means they have expanded playing all over our house. They are going on pretend vacation....which apparently requires lots of strollers and carriages. Man, they have tons of kids. Danielle has the white fur coat on, she is looking classy. They have high heels from their sisters, and purses stuffed with all sorts of things.

So. Dinner is almost ready, hot sausages, pasta, meat sauce, green beans. I like having piles and piles of green beans with sauce. The trick will be not to eat anything after dinner....that's when I feel snacky.

Ah well, Joseph put the pasta on for me, time to move it and drain it.
Posted by 16 blessings'mom at 5:52 PM