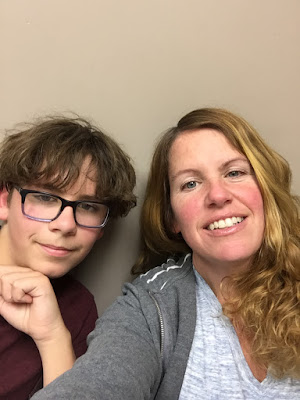 It's Jonathan's birthday! He's 12 years old. Jonathan is our Rainbow Baby, born way back before that term was coined. I thought I was unique in the absolute joy that Jon brought into our lives after losing baby Robert, but thanks to social media and other blogs, I now know this is a common experience...the complete and utter thankfulness for the baby that's born after a devastating loss: Rainbow Baby.

When Jon was born, I remember being so very thankful for the simple fact that he was alive. He moved. He cried vigorously from the minute he emerged into the world, then calmed down and checked us out with those beautiful eyes. He had wiggly, kicky legs, and tiny little toes...and he was alive. I'm telling you, after delivering baby Robert, holding a miniature little baby, your OWN baby, perfect in every way...except not breathing...no hope, the end before the beginning, wrapped up so sweetly in the familiar newborn blanket, yet cruelly still and unmoving. It felt like the end of the world. Go home and enjoy your other children, the doctor said. I was ready for that. Because after giving birth in that hospital to all of those other babies, babies who nursed and cried, and snuggled into my shoulder, I was traumatized every time I heard anything wheel down the hall, thinking they were bringing me my baby to take care of, and ugh. But Robert wasn't coming home in a perfectly prepared car seat in the nice little outfits we had bought for him. We were going home with broken hearts.

Then Jonathan came along...he was born ten and a half months after Robert. I could barely breathe throughout the pregnancy, every time he was still, I had to fight the panic. When he wiggled around in there, I hoped he wasn't getting tangled in the cord. It wasn't a blissful 9 months. When he was born, it was absolutely too good to be true.

His older siblings practically stole him from me, if I hadn't nursed him, I never would have gotten a turn. The loss of Robert affected them, too, and they smothered Jonathan in love. Jon has grown up to be just the best boy. He's thoughtful and helpful and kind and has a wicked sense of humor. He has the gift of patience with younger kids, little Annika calls him her "best friend".

Emily, Benjamin, and Aaron pitched in and bought him a really nice new bike for his birthday. I bought him soccer cleats, two Super Soakers, and a new soccer ball, and also gave him money to go out to lunch with three of his friends today. He's making bacon for breakfast right now, and I need to get up and go help make a special breakfast...French toast or waffles.

So today, I am thankful for Jon, and the joy he has brought into our lives.