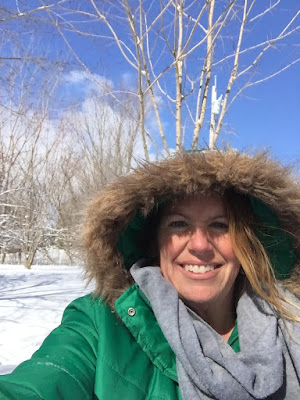 I was more excited about it than the kids...waking up to snow. Not just a dusting of snow, lots of snow...and wind, and cold. 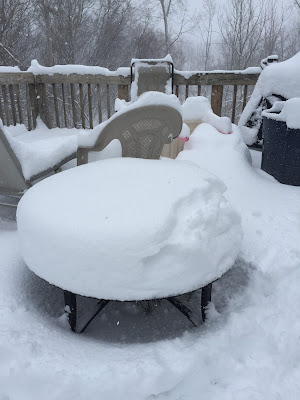 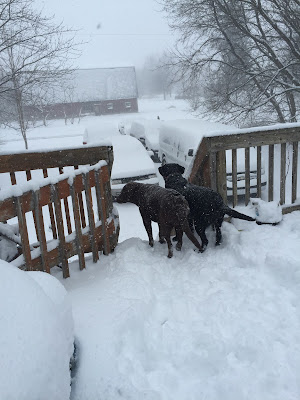 The dogs were a little confused, but I offered the word PLAY, and out they came, to scamper in the snow with me. Well, Suri scampered, Duke wandered around behind me and whined. He gets cold easily, I think, because he doesn't run around anymore. 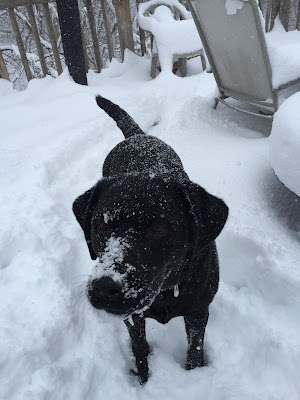 So I started my day by shoveling the driveway, on April 3rd.

Sam texted a picture, in D.C. it's sunny, and the grass is green. He said it was 81 there on Friday. Here, it's 22, and more snow is coming tonight, with cold and wind, making the work/school commute difficult tomorrow...on April 4th.

I won't be driving to work or school tomorrow, but I do have an early appointment in the small city for the mammogram. It'll be nice if they look at the results, and laugh heartily at how that lump is nothing but a harmless little cyst! Or a dried pea, that somehow got stuck under my skin! oh, that happens sometimes, they'll say. You have a good 30-40 years ahead of you, young woman, now go and enjoy it! If it turns out to be no big deal, I vow to cherish each and every day here on earth. Wait, I kind of already do. The thing about days is this: you can't get them back, you can't do them over again, and they get shorter and go by faster and faster. No matter how many I have left, I want to use them in a good way...

Anyway. Yesterday I drove Paul to the airport. There are eight kids still here at home, and usually friends here on weekends, three here this weekend. The airport is in a suburb where I grew up, lots of shopping places there (plus that wonderful bakery which I managed not to visit). Anyway, I decided to invite Evelyn along, just her. She's 16 years old, and oh my goodness is she spunky and spicy and amazing. 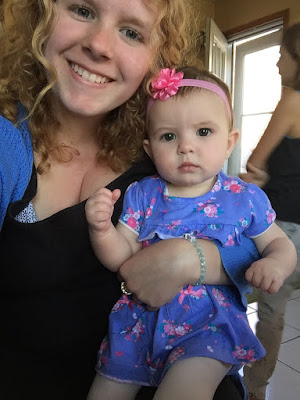 (Evelyn Joy with baby Lydia)
She has attitude. She has ambition. She knows what needs to be done, and she not only does it, but gets her siblings to do things. When she's good she's very very good...but don't mess with her when she's being horrid. She's tons of fun, though, and yesterday, we indeed had tons of fun.

She's going to California with Kathryn next week, and needed a bathing suit. So we went to the mall. Sears was first...and Sears was having 50% off their clearance. For example, I got a jean skirt for $4.99, and shirts for Jon for $2.49. I almost bought a winter coat for $15, regularly $120, but I put it back, and now I kick myself. We found too much stuff.

We found her a suit in a different store, and a nice rain jacket. We got groceries, and ran into my sister Cheryl in store...we saw her, so we sneaked up on her, hiding behind the store ad until we were right near her. Evelyn was so good about letting me stand there and catch up, even though we had been gone for hours.

We bought stuff to make the best taco salad, so that's what I did when we got home...

Our team lost the basketball game, but hey, they made it to the Final Four, and our women's basketball team did too, they're playing tonight. Not too shabby.

Ah well, it's chilly in here, someone should make some cookies...