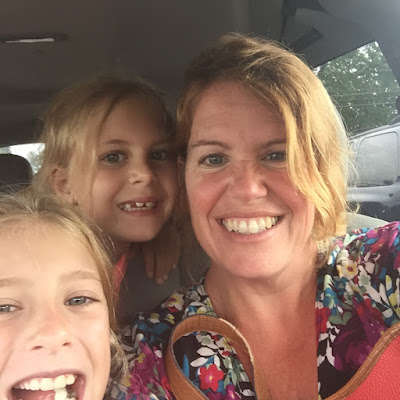 Today, Miss Char, Miss Cam, and I went to our friends' house all by ourselves, to swim. They dove and splashed, while I talked:)

We stopped at the little store in town, where Marge works, and bought some peaches and cauliflower and blueberries and ice cream and cheese and ham and bacon and bagels and cream cheese, on the way home. It's fun when your daughter is the cashier.

Jonathan didn't come with us today because he has a fever. He came down with it last evening while I was working at the baseball game. He was concerned that he wouldn't be able to go to swim today, and when he got up this morning it was obvious he was too sick to go. But, he said that we should still go and he would stay home because he would feel bad if the little girls had to miss it too, because they were so excited to go. What a nice boy. I was nice to him in return, I told him that because he was sick, he could stay home and play as many video games as he wanted to. He then asked, "Would ice cream be good for me too?" Yes, Jon, eat ice cream too.

Now Sonja K. has a fever, too.

So much for going to the Adirondacks next week...

Ah well, life can't be ALL sunshine and roses.

I am concerned about Duke. His surgery is all set for Monday morning...but what if he has cancer in other places, and we put him through this? Mali thought it would be strange for him to have such a huge ugly tumor, and NOT have it elsewhere. I need to talk to the vet in the morning before he operates.

Anyway...it's late, and Paul and I are going to watch a movie or something...the princesses are having a sleepover in Kathryn and Suzanne's room, Sonja is dozing on the couch, and Jon is already in bed. Mali was here for a while, but has gone home now. Goodnight.