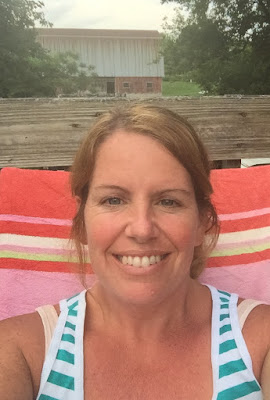 I love summer. Simply love it. 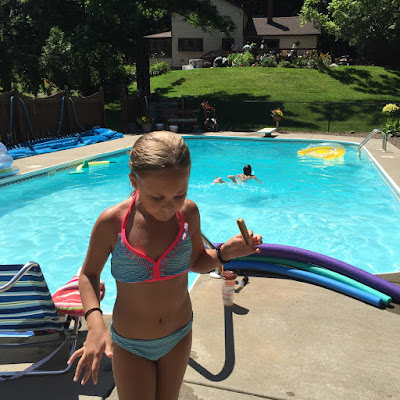 Cam at our friend's pool the other day. We are invited there again tomorrow:)

The three little girls, my two youngest and cousin Dani, just went outside in their jammies to play on the swingset. They have been up for hours, just as I predicted, but they aren't fussy or grumpy, quite the opposite. They had their breakfast, and have been playing store with the adding machine and the toy shopping carts.

I realized this morning that these days of little chattering girls are not infinite. Cousin Dani is turning 10 next month, Char is nine, and Camille will turn 8 in November. In a few short years, they will be sulky teenagers:) No, they will still be fun. But they will inevitably lose their joy at the simpler things in life, and will scoff at things that now delight them. The word, "boring" will become part of their vocabulary, and they will learn to roll their eyes at their mama. Going bye-bye won't get them all excited, they will solemnly ask where we are going, then decide if it sounds fun or not. They will moan about early mornings, and spending the entire day going in and out of the pool will lose it's allure.

I am not one of those parents who can't wait 'til their kids grow up.

These dogs of mine...Lily slept through the night last night, she has adapted well. But she did leave me a present in the hallway. She's chasing her tail right now. She likes chewing up plastic water bottles, at least it's not shoes. Mirielle came over last night, and could only find one sandal when it was time to go. Whenever someone comes over who doesn't live here, Lil repeatedly picks up one of their shoes and carries it around. I found Mirielle's sandal this morning on a living room chair. At least it wasn't all chewed up.

We do have flea problems, and Aaron's not going to be too happy about it. These dogs have been treated with the best flea treatment available, from the vet, and the cats have been treated too. I vacuum and sweep, and still they have fleas. I think it's because they go outside. Life certainly ain't all sunshine and rainbows, and sometimes I get sick of the work of taking care of pets....shoveling up prizes in the yard, and the kitty litter box, and the dog hair on the floor, washing the couch covers even though they aren't allowed on the couches with the covers...it's a good thing they're cute.