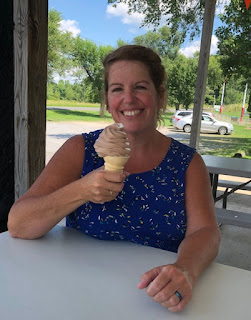 Yeah, you only live once, right? It's summer! And, it was lunch. :)
Anya took the ice cream pic for me.
See, this fine morning, I slept in a bit, and reasoned that it was too hot and humid for a walk, so I decided to take a swim instead. This is the pool from the window behind the kitchen sink... 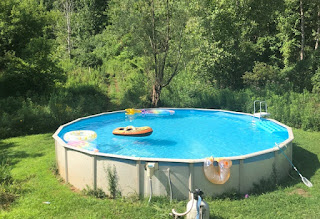 It's HEAVENLY. I absolutely love having a pool....the girls will talk about how nice it would be to have an inground pool, a diving board, and I say, "shh. Be thankful for the one we have." And they are:) 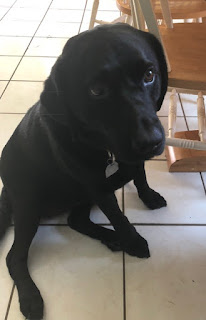 Miss Suri with her begging face on. She wanted bacon. 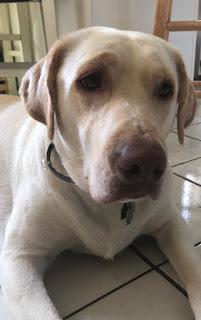 Anyway, my girls (nine of them!) are on a Glamping trip, Jonathan went off with his friends to a waterfalls park, Paul was putting a new screen door on the front, and I had my suit on after my morning swim...with plans to putter around and clean up and sit in the sun. Benjamin texted me that he had just Anya for the day because Ashley is glamping too. He was going mini-golfing, did I want to come? I sure did. 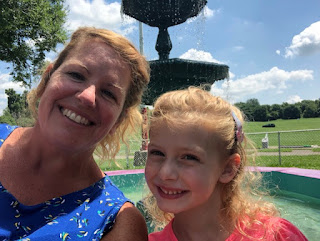 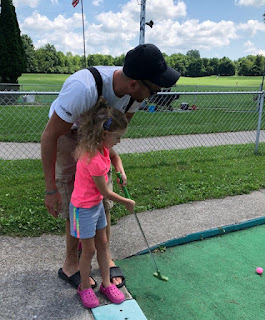 Benjamin is a good daddy, and a good son. It's hard to believe now that he was such a challenging teenager. 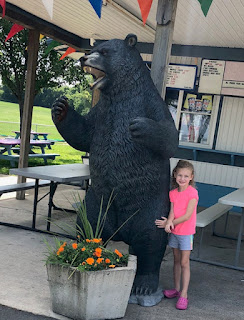 (because she's cute...she's my oldest grandchild, the first one, she's almost five!) 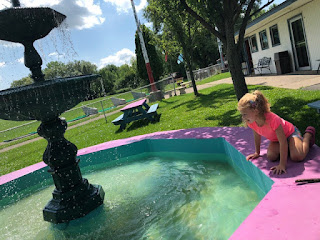 Everything's delightful when you're almost five. That's why it's so nice to hang out with little kids.

We came back here for lunch, and went for a swim, just Anya and me. We made a whirlpool, then she sat with me on a floatie, and we kept tipping and slipping, and she thought it was the funniest thing, her genuine joy and laughter made me laugh too, and we spent a good hour in the pool, laughing. But she is also very serious sometimes. She asked me about my wedding ring, then about the other ring I wear. I told her it was my mom's, and that I got it after she died. She said, "Did you take it from her?" No, I said, my dad gave it to me. "Are you sad they died?" Well, yes, I said, and I miss them, but they're in heaven. "Oh! They must've been really good. Were they really good?" Yes, they were. "Good! I'm going to be really good too, so I'll get to see them in heaven!" Oh what sweetness.

Benjamin, Anya's daddy, went fishing with Paul...I said I didn't mind having Anya here for a while.

We had dinner, a corn dog and mac and cheese for her, just a corn dog for me, and yes, I know, but they are sooooo good! And I get points for not finishing Anya's, right? I had a coffee, she had a green tea and some mint cookies.

We went in the pool twice, and after dinner, she wanted to go a third time. We played with the hose instead, cleaning out the water tables and putting clean water in them for tomorrow, as it's going to be 90 and humid, and lots of people are coming over.

We came back in, she had some fruit snacks and we colored...then I let her put on a "princess dress", one of the dresses I bought for $4.99 back when Char and Cam were going to be in Margaret's wedding and we hadn't decided on dresses for them yet...it is too big on Anya, but she was a princess in it, and yes, she twirled around. She did not want to go home when her daddy got back from fishing, but I told her to go home and go to bed really nicely and tomorrow she would be coming back again, she said, "Can we go in the pool twice?"

I decided that God is brilliant for inventing grandchildren: they free us from being lazy and selfish, and they bless us tremendously.
Posted by 16 blessings'mom at 9:46 PM

And our grandchildren are the frosting on the birthday cakes of our lives!! ❤❤❤ Yummy!!

How very precious! I remember when she was very little and living too far away and you could never get a hug from her.. look at the two of you now, aww, just beautiful, making memories.

Hi Della.....yes...grandchildren are just the best! I saw a sign or something once that said “If I would have known grandchildren were this much fun I would have had them first!” She is such a sweetie pie and it’s so lovely that you could spend some one on one with her. Have a great day today with all your company.