our twelfth child graduated..., and weight loss is working! 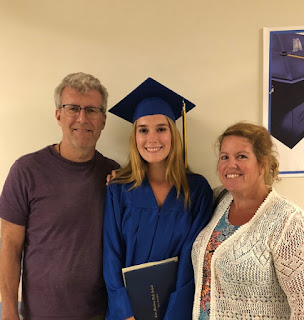 Now, when those babies are born, you think you have them forever. You know other people's kids grow up, and your eyes glaze over when they brag about where they are going to college. Your own kids just aren't going to do that, go and grow up on you.

Then it happens. It all moves so slowly, until the day it speeds up and shocks the bejeepers out of you.

The house did get clean, mostly, and the party went well. I'm very thankful for all who ended up coming, it was mostly a family party with a few friends. We had: pulled pork, marinated grilled chicken breasts, coneys (New York regional spicy hot dogs, really good!), a few hot dogs for small children...and Mirielle's homemade mac and cheese, fruit (watermelon, cantaloupe, blueberries, strawberries, honeydew...all cut up, yum!)(also from Mirielle and Abigail). We had pasta salad and chips and dip, and three bowls of candy (mini Snickers, Sunkist Fruit Gems, and Russell Stover individually wrapped chocolates.). There were homemade vanilla and chocolate cupcakes with buttercream frosting, which Suzanne and Camille made. Cam can make my own kind of frosting now, no recipe...

Some of the guests stayed late, which was really fantastic, we had a fire in the fire pit on the deck. The kids roasted marshmallows and ran around in the dark. 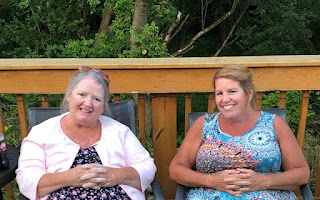 As we sat at the fire, I heard a rumor that Char and Cam and cousin Danielle were going to sleep on the trampoline. One of their little cousins said the girls said they didn't have to ask permission, because they are old enough. hmmm. Imagine my surprise when I saw how they rigged up their sleeping quarters. This pic was taken in the morning. They made it through the night and said it was very comfy indeed. 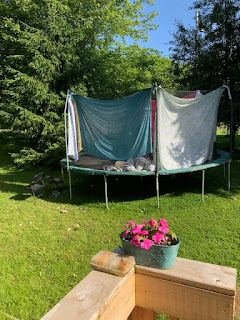 Now, the weight loss thing...you all know I've tried, and tried, and tried, and it's the battle of my life, secondary of course to my fight of faith. So I lost 70 pounds a few years back, when Ben was in Afghanistan, that's how long ago it was. Some of those pounds trickled back on, as they tend to do, especially when the unsuspecting victim is a now post-menopausal woman with a love for all things food. A woman with a deep respect for beautiful baked goods.

Anyhoo. I was up to 30 pounds gained back, ugh. I tried all sorts of things, but would lose two pounds, eat one ice cream cone, and gain three back. I don't eat much, in general, rarely sugar, no bread, ect. So I had to try something new. I started skipping breakfast, but that didn't help much. Until I started reading about what happens when you snack, and when you eat before bed, even if it's healthy stuff. I decided to skip all snacks, and eat ONLY two meals a day. If I get really hungry, or kind of shaky, I will eat earlier, but sometimes I make it until one, two, or even three before I really need to eat. One day I was super hungry in the morning, so I just made some Ezekial toast with peanut butter, which I don't eat very often, and it was heavenly.

I actually haven't been overeating at those two meals, either. I just have say: leftover pulled pork, and some veggies, a handful of tortilla chips, then a sixty calorie fudge bar. Or last night for dinner, it was a sausage/burger (Paul mixed hot sausage and burger together and grilled it, summers), and a bunch of the veggies from the pasta salad with like five of the spiral noodles. I was full and satisfied. In the evenings, I do get peckish, start feeling snacky. Ice water, or a cup of herbal tea helps.

So far I have lost eight pounds. Most must be water, of course. And now I'm only 22 pounds over my lowest, which was way back when. BTW, that seventy pounds didn't include pregnancy weights. With the last few babies, I was really up there. It also didn't take into account that when I went in for the dr. appointment that was the catalyst for my new Try To Get Healthy life, I had already lost eleven pounds since the year before.

My lowest weight, also to be noted, was higher than a lot of people's "Before" weight, but whatever.

My REAL lowest weight, besides my birth weight, was in high school, at my junior prom I was 123. So I wasn't always fat.

And you know, I don't think thinness and happiness go hand in hand. It's not about looks for me. It's about being able to move, and I also am leaning towards knee replacement...I want to be smaller, able to move easier. Heaving this arse out of a chair with one leg: impossible! Seeing Sonja, all young and healthy, maneuver after her surgery, holy cow.

Also, is "arse" a really bad word? My mother always said it.

And, about eating two meals a day, so far, I've felt okay. A little shaky a few times here and there, but not craving or starving, surprisingly. I still drink my coffee with half and half in the morning, two huge-0 mugs of it. And one in the afternoon. This morning, I had a tablespoon of coconut oil, too. I plan to change things up here and there, like have a higher carb day with maybe three meals, but stick to no snacking in between. The point is to burn your own fat, not have your insulin levels high all day.

We'll see. So far it's moving the scale like nothing else has been able to do, so we'll see.

It's quiet here still. I have to go turn on the pool pump. I got in it yesterday to scoop out the remnants of the leaves from the middle, and it was so nice and warm. Those dang cottonwood trees blow all that cotton, it clogs the filter and you have to go out and empty the skimmer basket like every fifteen minutes. It's like having a nursing baby.

I'm sure I forgot all kinds of important things, but this is it for today...

Hi Della! Sounds like the party was a roaring success as I suspected it would. What fun for the girls to sleep in the trampoline 🥰 Did one of the dogs sleep with them? My girls always had the dog out in the tent when they slept out in the back yard. You are doing well on your new eating plan. Good for you 👍. Just stick with it and you can do it. I have reached my goal on Weight Watchers.....now to maintain it! I feel good though.....blood pressure normal again. You are lucky to be having warm enough weather to be able to get into the pool!! We have had rotten weather really for summer 😤😤😤 I enjoy reading you blog every morning as you are so upbeat!! Have a great day!

Suzanne is a beautiful girl, she looks scrubbed in sunshine! Love the photo of you and Cheryl.
Congratulations on your weight loss, looks like you have found the right path!♥️

Suzanne is just gorgeous, congratulations to her!
Lovely photo of you 2 sisters. Fantastic work on the weight loss, it is amazing how you don't give up. Don't call yourself fat, I don't think you are, be kind to yourself.

Congrats to your daughter who has graduated high school and congrats to you on your weight loss. Ezekiel bread is one I use often too. Have you also tried Flatout bread. They have a few different kinds but the one with high protein and fiber keeps me full for hours. Have a blessed week.