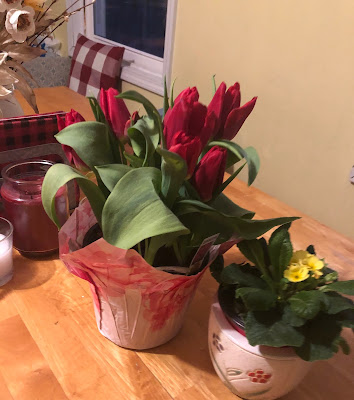 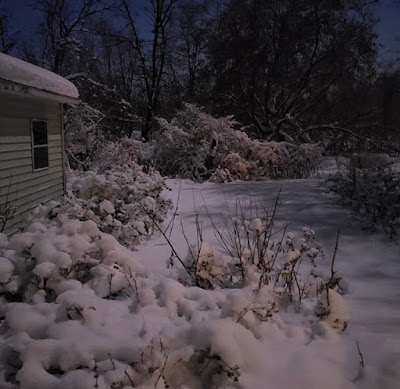 Emily took this pic of her yard on Saturday night in the moonlight. 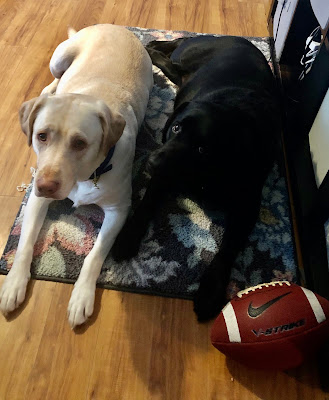 These two!!! I woke up extra early yesterday morning to drive Sonja K. to town to Grace's house, so they could go on their day trip to Ottowa. It was a lovely morning, cold and covered in frosting, white sparkly frosting. I got home and shh, I considered going back to bed, ahh warm comfy bed. I straightened up the living room a little, picked up a couch pillow, they're ever falling on the floor, and put it back on the couch...it felt a little damp, hmmm. Then I noticed it looked like something spilled on the floor. I got a paper towel and swiped some up, and, NO, it was dog pee! I am saying DOG instead of CAT because there was so much of it! I had to wash the couch cover now, because the pee-pee pillow was now on it, had to move the couch and clean under it, had to wash the brand new rug. It was like a 20 minute clean up.

You know, when something like that happens and you huff and puff and grumble, because of course you have every right to, no one wants to clean up that stuff. But I was thinking of giving thanks in all things, and believing that God sends all things for our very best. What a good test of patience!

Suri is the one who did it. She is famous for it if she has leeway and can go down the hall, ect., but we blocked her into the living room, I was very surprised she did that. So she went into Jon's room last night, she won't do it in a small room. I don't know why she does it sometimes, it's only once or twice a month, but ugh.

There were loads of dishes to do yesterday morning too, so I finished those up. Then, since I had fresh blueberries, I made muffins. I didn't eat any, either, which kills me yet I am not dead yet.

Emily, Evelyn, and I went to the store yesterday after church to get some dinner supplies. We made sliders, Buffalo chicken with cheese, and barbecued chicken. We also had roasted veggies: sweet potatoes and potatoes, broccoli and cauliflower, and Brussel sprouts. We made beef in the crockpot with crushed tomatoes, onions, cilantro, and a dash of molasses. We had fresh strawberries and blueberries, too. Mali and Josh came for dinner, and Ben and Ashley and Anya and Elise. It was a fantastic time.

Now, it's Monday morning, and it's quiet in here again. :) 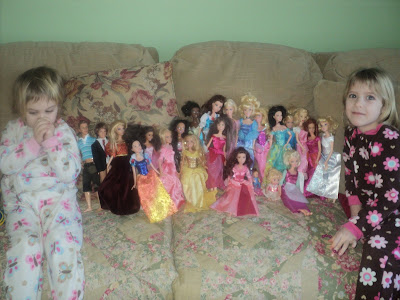 Have a cozy Monday, my friend!