kindergarten graduation and other pics 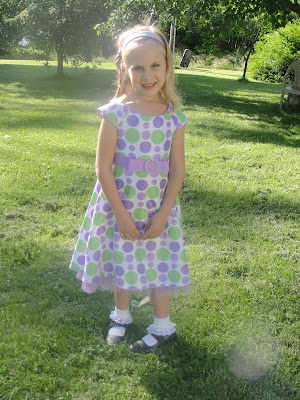 Miss Camille Anaya, our last but not least kindergarten graduate. (yeah, I know there are fingerprints on the lens. oops. 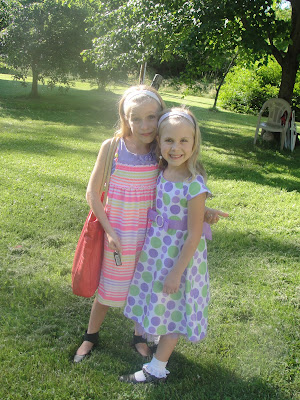 Miss Charlotte Claire with Camille...notice the nice purse Char has...it is mine. I didn't get suspicious at all when she asked me if she could bring my purse out. Or when she insisted she hold it for the picture. Or when she wouldn't give it to me on the way to the school for the graduation. Then the giggling started between those two girls. We Are Up To Something kind of giggling. So I asked for my purse, since they had it between them. I thought they were breaking the handles or sneaking gum. As Char handed it to me, she said, "We did something bad." 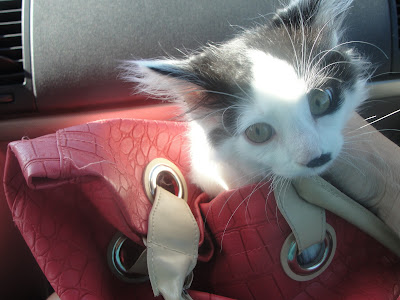 Yup, out popped the kitten. They brought that kitten in my purse, to kindergarten graduation.

He waited in the car with the windows cracked, good thing it was a cool-ish evening. 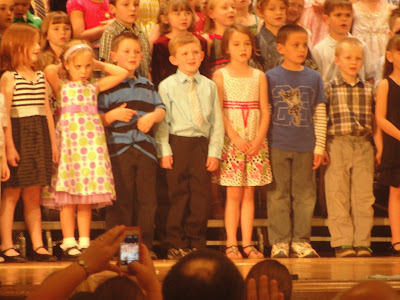 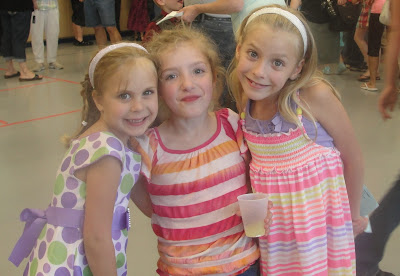 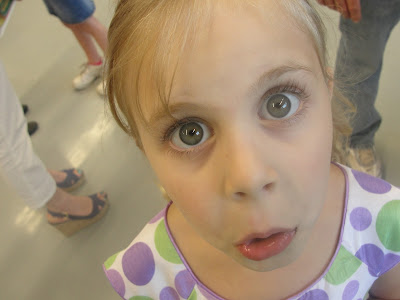 Camille still has that baby face... 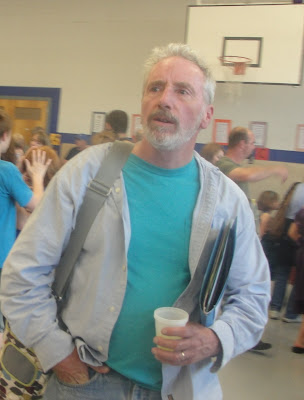 This is my brother Tom. His youngest child, his twelth, also graduated from kindergarten tonight. 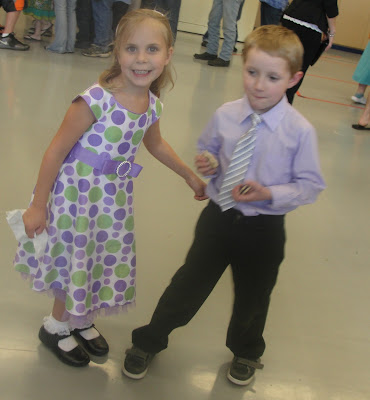 Camille with her cousin Sean, Tom's youngest. The matching lavender was a total coincidence, but they certainly looked sweet together. Sean didn't really want his picture taken though.... 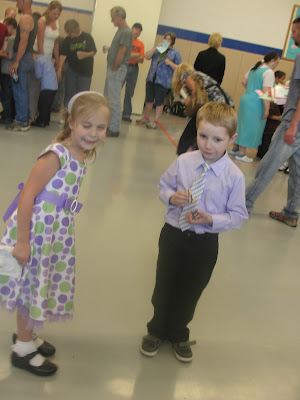 He kept inching away from Camille... 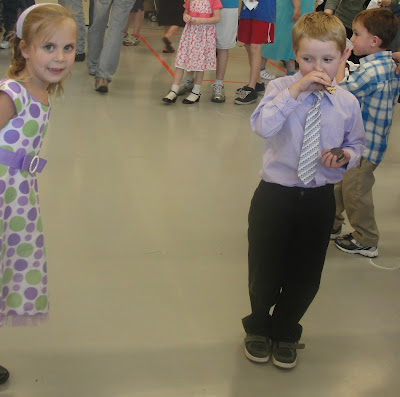 Just too much cuteness. 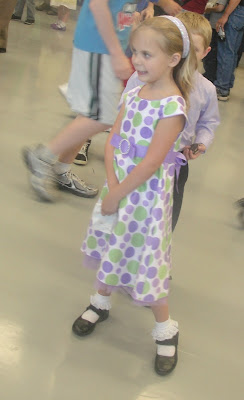 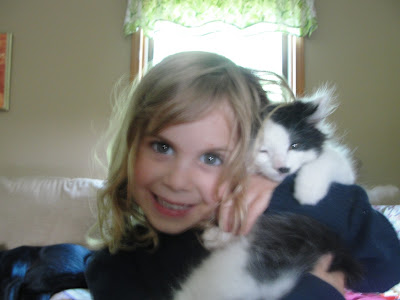 and some random pictures...this poor kitten! He is the nicest little thing though. He just purrs and purrs when he is scooped up. 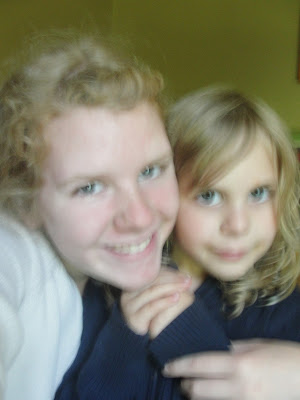 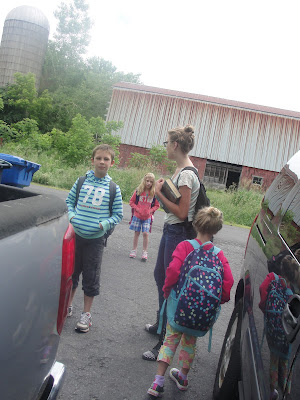 4 of the 9 school kids. Camille and Suzanne, 12, were Hair Twins today. 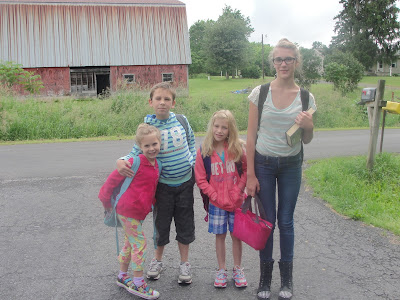 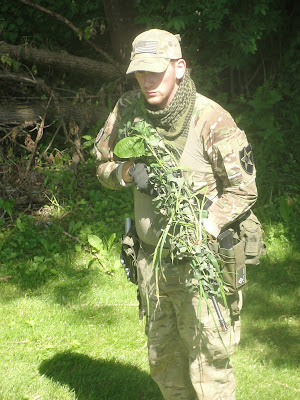 REALLY random, Samuel - my soldier son. He is all signed up for the Army. But he was just "playing" here...in Benjamin's old uniform, playing with his airsoft gun. 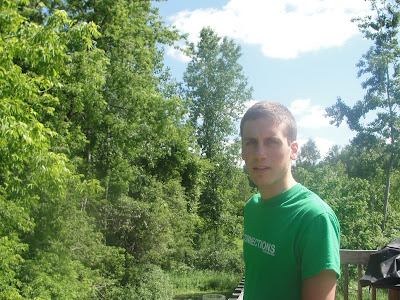 Aaron, 20, wondering why I was snapping his picture. 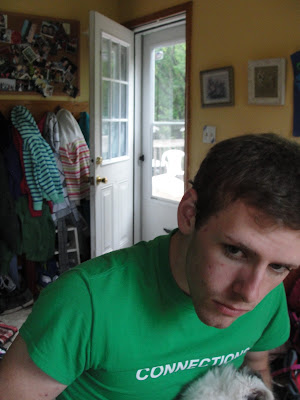 Joseph, 22. He has the same shirt on as Aaron had in the pic I put up of him. I don't know if I put any pictures here of Joe since he got this slick new hair cut...he looks like a different kid. 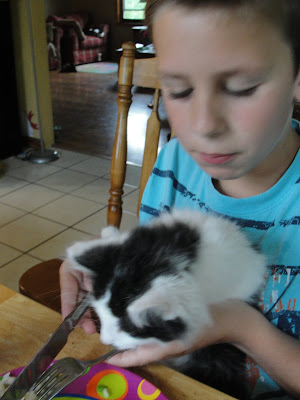 Jonathan, teaching kitty to use a fork and knife.

It takes too long to put pictures up with our slow internet. It isn't dial-up anymore, but it certainly isn't high-speed.

Today I went to the small city all by myself. To the dollar store (bags of pretzel M&M's, 6 pack of NatureValley strawberry and oat granola bars, a collar for Suri, since she chewed up her old one. again.)

Then to the thrift store for half-off Wednesday. I found a few things to maybe sell on ebay. "The Divine Secrets Of The Ya-Ya Sisterhood" for Abigail to read when she has her knee surgery next month. Random stuff, lots of it, for only fifteen dollars:)

Then to the grocery store on the other side of town...they have Friendly's ice cream for Buy Two Get Three Free. So five cartons of ice cream for ten bucks. Plus, they have ice cream bars/fudge bars for the same deal, with coupons on the boxes, so they were five boxes for 8 dollars. Just what we need, you might say. They also had fresh chicken thighs and drumsticks for 80 cents a pound...I also got some cherries and grapes and plums and peaches and a watermelon. And romaine and kitten chow and milk and frozen veggies.

Then home...for a little while. After the groceries were put away, it was time to get ready to go to kindergarten graduation.

Tomorrow I shall go to the pool, pick Margaret up from her state test, then stay home.

The three little ones are all sleeping in my room. It is so cozy to tuck them in then lie in my cozy bed and read from that, "Little House" book.

what beautiful pictures, Camille is such a pretty dolly! You must have been so proud!

I cannot believe Camille has graduated kindy ?!?
She is such a sweetie, and I totally laughed at the kittie in the bag!!!!
Too funny :-)

Great pictures! Beautiful family:) I have been reading your blog since Camille was a baby...it has been neat watching your kids grow up.