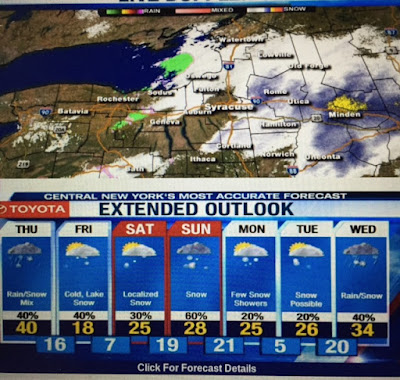 See that area north of Auburn, south of Oswego? That's where we live, right in the path of the snow machine aka Lake Ontario. Lake Erie is mostly frozen now, so western New York doesn't get as much snow now, but Ontario rarely freezes over. The cold Arctic air moves down, over the lake, and dumps it. The snow moves down in bands, sometimes one town will get pounded and across the way, nothing. You can drive to Syracuse, and it'll be sunny there, or maybe a snow band hovers over Auburn and it's fine at home. But mostly, we get snow. Not as much as Oswego, where Margaret and Adrian live, but we still get snow.

It's pretty, the snow. It paints the world white and sparkly, and covers a multitude of sins, even the trashiest places look heavenly on a winter's evening with the lights glowing in the windows. I love how the snow muffles sound, there's nothing like that special quietness of outside on a snowy day.

I talked to my son Aaron yesterday. He and Riley are moving from California to Oregon, so that Riley can start med school. Aaron is working at Stanford now, as an R.N., but will be taking a new job, in Oregon, and will be going back to school to be a nurse anesthetist. So no more trips to Cali for me, I will have to visit them in Oregon now, ha.

Lydia is coming over this afternoon, Mali has an appointment. Lydia is something else. She's two and a half now, and she knows everything. She can count and knows her letters and colors and she is just so animated and hilarious. She is so much like her mama it's like going back in time.

Our trip to Florida is coming up soon. I'm looking forward to feeling the sun warm my skin, and to sitting up late talking to Grandma. And sand between the toes at the beach stop on the way there, and yes, the sunshine...the long drive, I could do without, but Evelyn is sharing the driving, and she's excellent.

Actually, Anonymous, Riley is Aaron's husband. They were legally married in California last year. That being said, remember this: my blog is my outlet, my therapy, my happy place where I can just write, and sort things out. My children - they grow up, they choose their paths, and they walk in them. Their stories are their stories, and it isn't always easy for me to decide what's for me to tell the world. Have ever watched the movie, "The Family Stone"? :)
As a mom, I want what's best for my kids. I pray for them, I want them to grow up and make good choices, and I love them no matter what choices they make. I have personally found many treasures along the way of this journey...the way I think my life should be versus reality, ha. I cannot change anyone else, nor do I want to, but I can make sure that my own heart is pure and soft and non-judgemental. This purity doesn't just happen, we need trials, and testings, and situations in life that aren't always clear or fun, for that matter. But each of us has to stand before God someday, and I am working very hard in this time here to overcome my OWN sin, and be merciful and good to others.

That is wonderful that Aaron has a very special person in his life! Bless them and I wish them all the happiness!

Beautiful. I'm glad he has found love and happiness!

I’m so happy for Aaron, I’ve been wondering for a while and I think it’s great how you love and protect your children. We do not judge,everyone is entitled to happiness
Stay warm!
Love
Lara