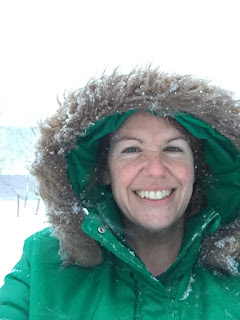 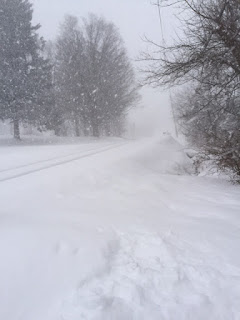 The snow was light and fluffy, so it wasn't a problem to shovel the driveway, and I reasoned it was a fair trade for not going on my walk. Today's excuse for no walk is the temperature: 10 degrees.(-12c) Nope. Just nope.

This fine morning though, the sun is shining, until the afternoon when more snow comes. I need to get to the grocery store, as we are almost out of eggs and half and half and and and. If I go during the day, I have to get back in a hurry because Sonja has physical therapy for her knee at 2:30. I am picking up the three high school girls and taking them with me to the physical therapy, and if I go to grocery store after, I have to go in the snow. And I don't like driving in snow.

Yesterday I made almond bread and banana almond bread, yum. I like to slice it up and freeze it, so I have something good to eat when I want bread. I also made a batch of snickerdoodle cookies after dinner last night. Snickerdoodles are cookies rolled in cinnamon and sugar. They are tantalizingly yummy, and I was careful: I sliced off one little taste, agreed they were good, then avoided them like the plague, even as I baked them all. The recipe I used called for butter instead of shortening, and oh dear they are good. The girls brought lots of them to school to share with their friends, and a lot of them got eaten after dinner last night, so phew, they are almost gone.

I have to get a mammogram before the end of the month, as I am going to visit the breast cancer specialists, blah. I don't want to for a few reasons:

1. Our insurance stinks out loud. I don't like to say "it sucks", but it does. We have a $7,500 deductible, which means that is what we pay out of pocket, before being able to pay only %20 of everything, which is also very costly. This place is pricey, and they want me in every six months with my huge risk factors, which include my maternal grandmother dying at a young age of breast cancer, her sister dying of breast cancer, my mother having breast cancer in both breasts, and my sister having breast cancer. I settled on once a year, which still costs us a small fortune.

3. The anxiety and worry about results takes years off my life, ha.

4. I don't like going to the doctor, don't like being pawed at, don't like the questions...and when that nice breast cancer doctor found out how many kids I have, she was shocked, I grew antlers and turned into a Crazy Lady. Seriously. You can see the change in the way you are viewed, it goes from just a normal fat suburban housewife, to a weirdo who is obviously not too smart.

5. Ain't nobody got time for that. I watch little Anne three days a week, so I have Mondays and Fridays to do things like field trips and going to the pool and appointments. She is a good little girl, very happy, most of the time, so it's not a huge deal to bring her to things, but not to a mammogram, so that has to be on a Monday or a Friday.

But, at the end of the day, I know I am lucky and blessed to live in a country where we at least have good healthcare, albeit expensive healthcare. My mother's breast cancer had spread to her lymph nodes, and she had some major surgery, but she lived like 25 years after her original diagnosis, and that was way back when.

Each day is indeed a gift.

And I am squandering this gift, by sitting here blabbing, ha.

I have washed dishes and swept floors and am trying to teach Sunny that she has no business barking at the neighbors when they're out in their own yard, which consists of me telling her to be quiet, which she totally ignores, to me getting up and telling her, which she also ignores, to me making her Get Down from the couch, and telling her to Lie Down on the floor, which she does, clunking her head down her paws with a huge sigh, then making her way slowly back to the couch into her Looking Out The Window spot by the time I am sitting back in my chair. It's like having a two year old.

I am learning patience as well. I have my grand doll each day and she has learned the word no when you tell her to do something. It is tiring and absolutely a joy at the same time.

I see the photo of the snow and I almost cried... we moved away from the frozen tundra a few years ago and I have YET to miss it. Nope. Not a bit.

And the whole sucky insurance thing - I was JUST discussing this with my husband by text a few minutes ago. We have an MRI tomorrow and we have to show up with our co-pay of $550 (gulp) because we too have a huge deductible like you do - and then they only pay 60/40 even after. Up until 1/1/18 we've always had 80/20.

Anyway - made low carb, wheat free hotdog buns today so I could have a bun with my grilled cheddar brat. :)

Wendy, I do think the insurance might cover the mammogram itself, not sure if one every year is covered though. The visit to the cancer specialist to discuss the findings and do other exams is NOT covered, and all of it will be out of pocket because of the huge-0 deductible.
60/40 after the deductible? wow. But I hope the MRI finds nothing bad.

Carol, it's funny how that is, they are so awful but so cute too.:)