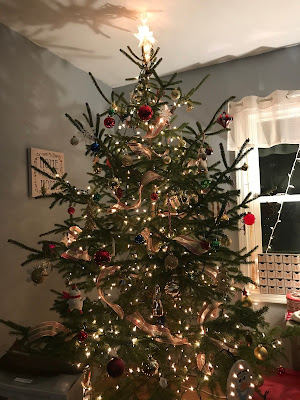 This is our Christmas tree back home in New York. Paul cut it down with Sonja K., and Evelyn helped her decorate it. Char and Cam and Emily are stuck in Winnipeg, the snowstorm is causing flight cancellations.

Here in Oregon, things are relaxing. Kathryn is due tomorrow, so we wait eagerly. Today, we went to church, where I talked to a few old friends, and made a few new ones. We then went to Winco with our grocery list and meal plan for the week. 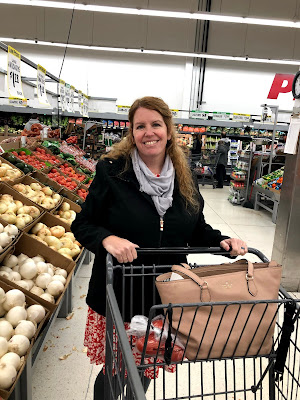 What?! I have to have my grocery store pic!

Then...Darius, Kathryn, and Jonathan ordered Thai food. I opted to just run into Chipotle quick and get a carne asada bowl with cilantro lime rice and medium pico, with cooked peppers and onions. The line was super long and the wait was too, so the nice manager manned the register, and gave me a free drink and free tortilla chips. Now, today was my getting-back-to-seriousness day after two days of thanksgiving fun (Jon's sweet potato casserole with marshmallows, golden brown, and toasted pecans...and the pie!). So it was my first and only meal of the day, and I was battling with myself over whether or not to get the chips. No, I shouldn't, then I won't have them and won't eat them. But, they're so good! Long story short, I got free chips, so I ate them.

Anyway. We put our groceries away, they played Settlers of Catan, then the boys went out with one of the other boys from church for a bit, and Kathryn and I watched a movie. They like watching Fixer Upper, which is fine by me, I like Chip and Joanna, and I like the nice houses. Darius is a finish carpenter, so it's his thing.

So tomorrow, Kathryn has a dr. appointment. She's been counting down to this day for so long, I hope she's not disappointed that it may well be just an ordinary day. The whole idea of "due date" should be abolished, and a general timeline be given instead, in my own humble opinion. I remember if the due date came and went, I would get all discouraged and think, "Oh well, I guess it just isn't going to happen." The days seem sooooo long, especially with the first baby.

I love your grocery store pictures. :) I'm not a 'clothes shopper' and I'm not a girly girl who likes to buy shoes or purses. But I love grocery shopping! I look forward to all the different grocery store photos and scan the background to see what the store is like.

Good morning Della............it looks like you and Jon are having such a good time. I hope Kathryn doesn’t hang on for too long.....poor thing, she’s probably getting fed up by now. Enjoy your visit!!