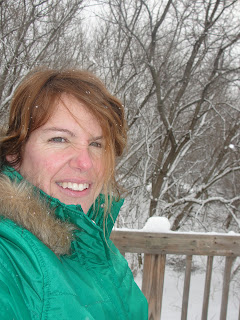 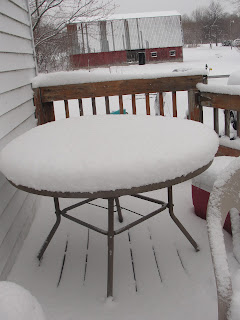 Suri didn't mind the new winter wonderland when I took her out this morning. She somehow found her favorite stick, and romped around trying to get me to chase her as I shoveled a path down the driveway.

Today is a special day for the Jonathan, Charlotte Claire, and Camille. They are going to Emmy's house! Emmy has our kitty Swanson now, and Swanson has six kittens. Emily is such a nice big sister. I talked to her yesterday and she was very tired and worn out. She works hard as a nurse, twelve hour shifts usually. So it is very nice of her to use her day off to have her young siblings over. They are so excited! They have three hugs suitcases all packed. I have no idea what they put in them, but they are stuffed full. They were already set to go yesterday.

Aaron got a job already! As soon as he passes his boards, he will start...same hospital as Emily works in.

Some of my kids almost had me talked into taking them to Washington D.C. this weekend. Leaving Thursday, spending three nights. But. I just don't want to leave the younger ones. It would be the Medium kids who would go, like Samuel 17, Margaret 16, Kathryn 15, Evelyn 13, and Suzanne 12. We talked and planned...were going to book a hotel north of the city so we could take the metro and not drive in the traffic...a few of them are not happy that I decided not to go. So...don't be surprised if I give in and take them:)

We are also going to the children's museum of play one day this week.

So the daughter with the lump behind her ear is worried but she shouldn't be. The dr. said it is a lymph node, and is a little larger than they would like it to be, but not to be concerned...check it in a month, if it is still big, bloodwork. Now, lymph nodes can swell for lots of reasons, and stay like that for long periods of time and be totally fine. But. There is always that big K word which we don't like to think about, yet...when one goes on WebMD, one sees that any lump should be checked out!!! So I took daughter for take out Chinese, because hey, if you're gonna die, may as well live, right? Perhaps we joked too much about it, but everyone IS going to die someday.

So...here we are on vacay. I love it. I stayed in my comfy bed 'til 8:30, even though I heard the princesses' door open and slam a few times. Then I thought of Suri, and how much she probably needed to go out.

Vacation is not really vacation, for the mom, of course. Some of the medium kids get nocturnal, and don't come upstairs until afternoon.

Have I mentioned how much I love Easter candy? You name it, I love it. None of that, "oh, I hate marshmallow...." for me. Nope, sour gummy bunnies, Peeps, hollow chocolate bunnies, Reese's eggs...love it all. And I have tasted a few things, which I cannot manage...no, I have one piece and want another. No more. No more for me. The baskets sit there, and I will stay out of them.

My son had a lymph node problem back in April. We were at a football game when he said his throat hurt and I looked to see a golfball sized lump on the side of his neck! After they sent us home from the ER, a few days later they determined that it was strep and the lymph node was abscessed. We spent three days in the hospital where he had to have it surgically drained, all while my husband was out of the country scuba diving in the Bahamas with no phone contact.

The doctor said that is very common, and they have to do it at least once a week.

Go to DC. Often the middle kids get left out. The older kids get to do things, and the younger ones get special treatment because, they are well, little. Take them!

One of my sons had enlarged lymph nodes, and his Dr referred him to a surgeon for a biopsy consult. Surgeon did bloodwork and just had my son come in every 6 weeks for a few months to keep an eye on it. Never needed the biopsy, it was determined that the nodes were large due to allergies. He's been fine for years. Hope your daughter's nodes turn out to be nothing worrisome. I do know that feeling of worry though.

Oh and congrats to Aaron on the job!

We were just at the museum of play. We have a family pass. It is actually cheaper than paying for all us to get in for one day. We love it there. We are from buffalo Ny.

One of my behind-the-ear lymph nodes was swollen when I was younger (probably about your daughter's age), and I can't even remember why...it turned out just fine!

Easter candy...I only have two little girls, so I feel like it is my responsibility to hurry and eat all the candy myself so it will be gone...HA!