the tiki resort and other interesting places....

Pictures are over-rated, right? Internet issues have prevented me from putting photos on right now, but I feel like writing anyway, so here goes...

Oh the fun and excitement of the last few days...on Sunday evening, Mali was here with little Lydia, and Mirielle was visiting too, as well as a few other friends. I grilled steak and chicken, even though Miss Mali is a vegetarian, and we had a nice time. My favorite thing is hot summer days, grilling in my bathing suit, then jumping in the pool afterward to cool off. Now, don't get the wrong idea, I am not walking around in a string bikini or anything, my bathing suit is more modest than most of the clothes I saw being worn today at the theme park.

Anyhow. On Sunday evening, I decided on a hotel to book in Lake George...we had five free tickets to the Great Escape water and amusement park. So I decided to do the Expedia secret deal, where you know what the amenities are, but not the exact hotel until after you pay for it. Well. For $71 a night I suppose one can't be too picky, but we got the Tiki Resort. It WAS pretty cool...an outdoor pool with lots of lounge chairs and clean towels, plus an indoor pool that was rather creepy, but hugely fun. We stayed in the motel-like building, with two double beds and our own little patio with two really ugly chairs on it. 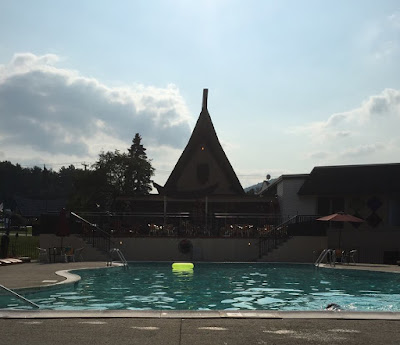 We arrived in the early afternoon and had plenty of time to lounge around by the pool. Evelyn 16 and Sonja 13, Jonathan 11, Char 9, and Cam 7, were the crew.

After we got good and hungry, we got dressed and walked into town. It's a touristy place, so there were sidewalks along the main road. We had pizza and ate in the outdoor seating section. Pizza Hut, wake up! This Lake George outlet is a dump! The service was meh, the pizza was okay, and the table was yuck. Anyhoo.

The kids liked the pizza. So I didn't voice my complaints.:)

We walked down to the water and saw some huge paddle boats, and lots of dogs, and people and more people, and then the beach. We took off our shoes and walked in the sand and into that clear clean water of Lake George. The sun was getting low in the sky, and everything looks beautiful in that lighting. 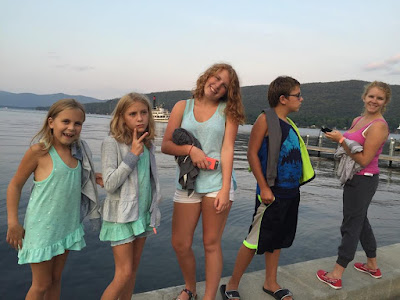 Back to our hotel/motel, and we decided to try the indoor pool. Tacky? The Tiki theme with those strange mask-like faces, and orange paint...the lighting was dull, the whole pool room was downright creepy.

We were the only ones there, and it was all echo-y and empty and I felt like we had gone back to the '70's when the Brady Bunch went to Hawaii.

We woke up bright and early this morning, this brilliantly beautiful morning, and headed to a cafe right down the road from the hotel....I had done my homework, and this place got rave reviews. They roast their own coffee beans! They bake their own bagels and English muffins, and make fresh cinnamon fried cakes, and all sorts of pastries and danishes. 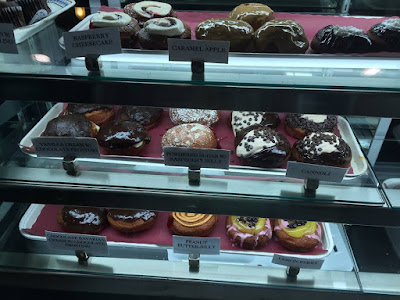 I let Jonathan get a cup of coffee just because. Because he wanted one. Sonja got a French Toast Latte. mmmm. The coffee was absolutely ten thumbs up. I behaved myself and had scrambled eggs and bacon, gave my toast to the little girls so they could try all the jam. I had only one tiny taste of the still hot fried cinnamon donuts we shared. It was so hard. The kids had these pancakes and whipped cream, the older girls had the fresh baked bagels....have I ever declared my love for carbs?

But before you go admiring my virtue in declining to pig out on fresh pastries, consider this: I had THREE pieces of pizza the previous evening. Not one. Not two. But three. I don't exactly know what led to this, other than I was hungry and thought I deserved a prize for:

1. Getting us all safely to Lake George.

2. Planning such an adventure all by my lonesome.

3. Packing and remembering and getting there and...okay, I don't have a valid excuse.

The fact is, all reason and common sense walked right out the back door of my brain, and I ate pizza. Two slices of bacon, and one slice of buffalo chicken wing. And guess what? It was good. Really good.

I should mention that I did behave myself the rest of the evening...no chips for me, no chocolate, no sour candies.

And today, I also behaved.

The park was phenomenal. It was clean, and it was a lot like the Magic Kingdown, Disney. I managed not to throw up my breakfast after that first crazy ride...it took hours to get my equilibrium back. It made me dizzy from head to toe, and I hated it. The kids loved it! They wanted to go again! They went on the flying swings afterward, and I sat there and tried not to think of anything yucky because seriously, my breakfast was up to my chin. 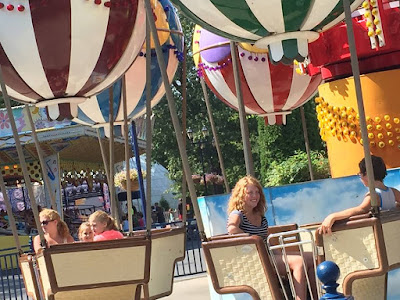 We rode the ski lift/gondolas, and I waited while they rode some other dizzy rides. I made friends on benches while I sat, other moms who would just as soon sit these dizzy ones out.

I found my comfy place at the water park. The lazy river...oh yeah, I went down it like four times. It was very hot today, near ninety degrees and sunny, so it was nice to be in the water. The kids would come and check with me, then go on a different water ride, while I sat in the sun, or went in the lazy river again.

And...I went on a huge roller coaster! What was I thinking? The drops are fun, but the turning-corners-while-going-insanely-fast got old fast. When that ride finally stopped, I thanked the Lord for letting me survive, and made my way to the first bench in the shade, while the crazy kids WENT ON IT AGAIN.

The parked closed, we headed home...a three hour drive...as soon as we got on the Thruway, one of the princesses had to go pee, really bad. So we stopped at Starbucks. I let them all choose a drink, as I think we didn't drink enough during the day. I had coffee, so as to not take a little nappy nap on the way home...they had hot chocolates and iced chai lattes and iced coffee and a frappuccino...that was Jon, a vanilla bean frappe with whipped cream. I wanted to snatch it right out of his hands and drink the whole thing. I politely declined a taste, because it was probably pretty good...

Anyway. We're home. We're tired. They are all in bed, and I am headed there soon. Sleeping in a room with five kids is great fun, but I woke up a few million times. For one thing, the fire alarm flashed all.night.long. It hurt my eyes even when they were closed, so I had to drape the sheet over my eyes, but not cover my face because I can't sleep with my face covered. It was annoying.

I made the kids stay awake and talk to me all the way home so I didn't fall asleep at the wheel...and finally we pulled into the driveway. We were only gone for one night, but it was such a nice little vacation. 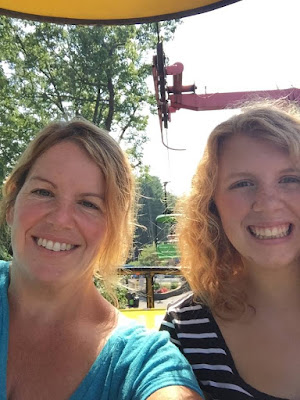 Sounds like loads of fun, and kudo`s to you for doing it on your own!

Laughing so hard re: The Tiki Resort! As usual, you made the best of the situation!