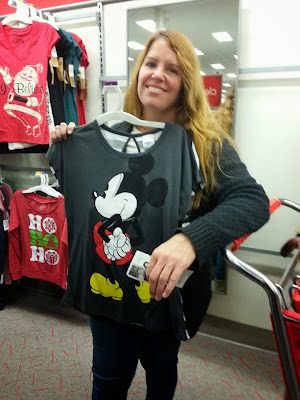 I do not wear t-shirts with Mickey Mouse on them. But I threaten my older kids that I will someday, just to embarrass them. No offense to anyone who chooses to sport such apparel, I just would feel ridiculous in a shirt like this. Not that YOU are ridiculous if you wear one,....never mind.

Anyway. Paul is on his merry way to Germany again. I drove him to the airport this morning, taking Sonja along for company. I kissed him goodbye, which Sonja took pictures of with my phone, which I forgot to put on here, which is fine, because you can well imagine that I was sad.

After dropping Paul off at the airport, Sonja agreed that we really shouldn't stop in to the best bakery in the world for donuts, although we were very tempted. I know she was just agreeing with me to be nice, she wanted those donuts but she knows I can't resist. Why would I even consider going into such a heavenly place? If you aren't a donut lover, or a lover of all things freshly baked, you must think me crazy. But the bread from that place, hot from the oven....and the pies, works of art. A whole case of cookies....half-moons and chocolate dipped and chocolate chip and frosted cut-outs....and of course the pastries and muffins and eclairs and cakes....

But we resisted. A new microwave was on our list of things to buy, because it is one thing to live without an oven, but adding the microwave to that was just too hard, hashtag first world probs, as my teenagers would say.

So we went to the warehouse club and bought blueberries butter and almonds and milk and bananas and grapefruit and romaine....and a new pair of boots for me, warm sheepskin lined boots that were $39.99, way too much but worth every penny...my last pair lasted me years. Anyway...we bought lots of stuff, but no microwave. We weren't impressed by the selection or the prices.

This meant we had to stop at Target, and we did get on there. And a few more things, too....

Then a "real quick" trip to the grocery store for chicken and Greek yogurt and eggs and strawberries.

Then home....to make pizzas for dinner, in our oven with only the broiler working. Oh, sweet trickiness! I would turn the broiler on HIGH, since the LOW setting doesn't work, then turn it low for a bit just to keep the warmth in the oven so it would bake a little, then turn it back to HIGH for a few minutes....and within only a few hours, three pizzas were done! The first two weren't done very well on the bottom, but the last one we left in longer, and was more than done.

I didn't have pizza, I had chicken, and some strawberries.

Abigail came over for dinner, then we watched, "Fried Green Tomatoes", which is based on the book "Fried Green Tomatoes At The Whistle-Stop Cafe", by Fanny Flagg, it is a good book and an excellent movie. Kathryn, Evelyn, Suzanne, and Sonja watched it with us, and loved it.

Oh, I forgot to mention that our first stop today was at a discount store called Ollies..... 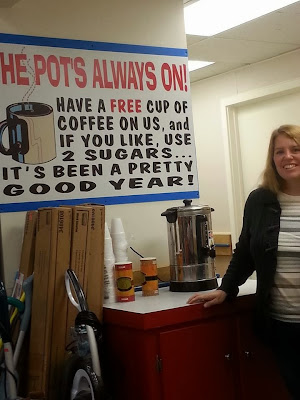 I had never been to Ollies before, and I don't know what I think of the place. It was fun, but....there is too much junk there. I bought some Christmas tablecloths, and a book by Time magazine about the 100 most important events in history, for Jonathan, and the rest of us, to read. 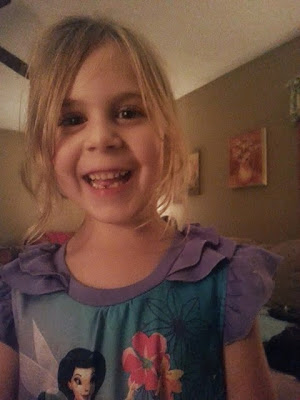 She had been wiggling and wiggling, and whining and fussing about that tooth, it was the loosest tooth I have ever laid eyes on. It could have come out a few days ago. I finally showed her a video featuring a little boy pulling out his tooth, and she got a papertowel and took it out. Then I had to remember to leave a little treat. She came back out after we put her to bed a few times, and I saw her looking over at where she had left the tooth, so excited and hopeful to see if the toothfairy perhaps remembered this time. Which, yes, she did. She got a dollar and a little pad of cupcake sticky-note papers.

Today was my brother's birthday. My brother Billy, the one who took his life. He would have been 52 today.I thought of him off and on all day today. In our family of seven kids growing up, it was my sister Cheryl, then four brothers....Bob, Tom, Joey, then Billy...then me, then my little brother Casey. Billy was almost four years older than I, but he was the next kid up in age from me, and we were buddies. It is so cliche' to say that his death left a hole in my heart. But I can say that it still hurts, I still find guilt, (we should have known. we didn't. we can't help that we didn't know. but we should have known.) I feel bereft and abandoned, in a way, after having both my parents die, then Billy killing himself. It does get better, it dulls a bit for the most part, then when I least expect it, I will imagine his feeling of desperation, I will think about him lying out the pictures and the stack of money for his funeral (yes he did that, responsible boy that he was), next to his bible, and I think about him and how he could have actually done what he did. And I think too of my poor brother Tommy, who heard the gunshot, and who went and found him. The whole thing was so traumatic, I think we were all in shock that night. How long does it take to get over it? I am guessing somewhere in the neighborhood of NEVER.

Yet here I am, alive and somewhat well, trying my hardest to make the most of each day, to count my blessings, to not grumble away the days with petty complaints and dissatisfaction with my lot in life...wow, I don't mean to sound like I live a difficult life of drudgery.....but honestly, there are times if does feel that way. We as humans always think the grass is greener on the other side of that fence though. But we all have our trials, no one escapes them.

Oh I am tired, and I am rambling. The girls will be up early in the morning, the doggies will want to go out, so I have to get some sleep....