in which she tries....she really does. This fine blustery morning, I had to blow-dry the princesses' hair after their showers before taking them out...to the doctor. Char has had some things going on that needed checking out, and of course Camille burst into tears yesterday when I informed her that Charlotte Claire wouldn't be going to school today. So, since Camille IS my baby, six years old or not, she got to stay home and join us on our little trip to the small city.

We no sooner got home, and it was time to got back out the door with Paul to do some banking, and a quick stop at Walmart for some things for his trip to Germany. He wanted to bring some American chocolate, so we chose some Dove Promises instead of Hershey.

Home just in time to leave again to pick Margaret up from school, she is working the dome this evening and had to do a few things before leaving again...I washed up the sinkful of dishes, and out the door again to drive her to my sister's house to get picked up there for the dome....

Home again. I forgot to put the potroast in the crockpot this morning, so I decided to just brown it up and try to cook it on the stove....because the oven just isn't heating up. Last night, we had to broil the pizzas on the bottom rack of the oven, which sort of worked, if you like blackened cheese and soft crusts. But my plans were foiled when I walked in and found Paul fixing the oven. He is searching online for a part right now. I hope hope hope they have on in stock at the place in the small city, because Paul is leaving tomorrow for Germany, for two weeks.

So. Here I sit, with a cup of coffee, and a nice kitty lying on my arms as I type. He is cuddly and warm, and is purring loudly. He is seriously stupid, I have never ever had a kitty as nice as he.

Anyway....we had a birthday yesterday! 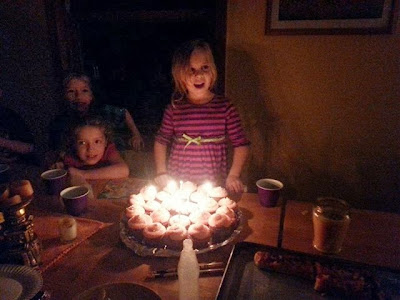 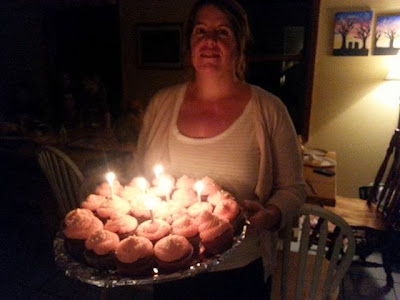 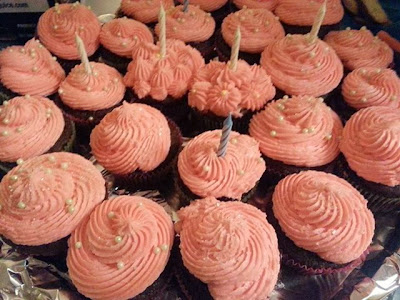 Our temperamental oven worked for the cupcakes, but didn't warm up after an hour yesterday. And the verdict is in: no place around here has the part in stock, so he is going to put it back together, and....well, the stovetop works, and we have a microwave, and....we will survive.

The little girls just had a nice big fight, Char won't listen to Camille explain why she is upset that she thinks Char won't play with her. And so on.

Today is a better day than yesterday for me. But keeping the big picture in mind, I don't mind the days I have to fight through. The only way to be free from the things that bind us is to have the grace to see them for what they are: snares and sin. I can blame everyone else all I want, but ultimately, I am the one who has to deal with what is in me. And although it doesn't feel so good, on those days when it is so glaringly obvious, to see myself, I am thankful. God does indeed give grace to the humble:)

Believe it or now, the house is a mess. Legos and Duplos and Nerf guns and and and....remnants from that birthday party. Since I haven't been home much today, I have some catch-up to do.

Joseph is a nice boy, my 22 year old son. He drove a group of younger guys to an airsoft tournament this weekend. (An airsoft gun doesn't really hurt, the pellets are...soft. These tournaments are really well planned and organized, the boys get assigned to teams, and it sounds like they play Cops And Robbers all day long.) Anyway, this event is like four hours away, and we didn't feel comfortable with Sam driving them, so Joseph went along to drive. He is not participating in the airsoft, so he will have some free time to explore the area, perhaps read or draw....

So the boys are sleeping in tents, and had to pack food. I sent them off with apples and bananas and Balance bars and some money, especially for Joseph, who is going to make his brother and friends happy.

Camille is done fighting with Char for now, and is cuddled up on the arm of my chair. And now I need to put this computer away.
Posted by 16 blessings'mom at 3:59 PM

Can you get one of those counter top turkey roasters? They should be everywhere now and you can bake in them. At least you could do your roast that way and not on the stove top. I don't think it would help you for pizza night though :(

Oh, the airsoft pellets DO hurt! My daughter has scars from them, lol. They love to play though, but I just wanted to clear that up. :)

Oh Holly, I know they do. But not for these boys. They dress all in their gear with protective eyewear, so they are pretty safe. I think it sounds like so much fun I tried to get my son to let me play sometime, but he finally said that he just couldn't shoot his Mom:) EmmaLea, that's an idea, but we are going to fix that oven soon. Paul is ordering the part, and if it comes while he is in Germany, I'll try to get my brother to put it in for me. Thing is, our microwave died tonight....ca-ching!