arctic air is a comin' for a visit...

But I hope it's not too rude of a guest. Have you ever read the book, "Owl At Home", by Arnold Lobel? Well, you should. Get it for your kids or your grandkids. Or read it to your cat. Owl felt sorry for winter, so he invited it in. Well, winter was a rude guest! It turned Owl's hot pea soup into green ice, and blew snow all around his house! So he shooed it back out the door, which it slammed when it left!

Reading stories to kids is golden, it should never be replaced by letting them watch a you-tube video or playing a game on your phone. In my humble opinion.

So our weather forecast is dismal, we live southeast of Lake Ontario, which is a lake effect snow making machine. It IS pretty, snow is falling right now, huge flakes, like living in a snow globe. The tree branches are all sparkling with snow, and more just keeps swirling down.

Maybe today I'll venture outside and take some pictures.

Yesterday, we took a quick trip to Costco, although Kathryn will tell you that "quick" wasn't the word she would use to describe it. I love Costco, it's rather new to the area, and Emily surprised me with a membership a bit ago. I have only gone a handful of times because it isn't so close by, but yesterday I was heading out to get a few things, and Mali texted. She was wondering what we were doing, so we decided to meet at Costco, since it's near her house.

Little Anne, and Lydia, and Cam and I...Camille is getting so big!

They are so adorably cute.

After Costco, Mali headed home for a few things, then to my house. We took a detour to Target, Kathryn had a few things she wanted. Since Emily had taken Jonathan and Charlotte Claire cross country skiing: 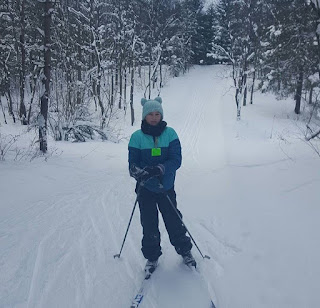 So I spoiled Cam a little, and let her choose a few things in Target...a discounted Christmas bingo game, which we had fun playing last night, and a few small clearanced toys.

We had hamburgers for dinner, but honestly, it's not the same eating it with a fork and no bun, I rarely eat regular bread or buns anymore. :( There are lots of recipes for substitutes out there, and believe me, I have tried some. This very morning I baked a double batch of cinnamon almond bread (with flax seed, coconut flour, and a whole dozen eggs)(and a little bit of honey, ha) It just came out of the oven, and mmm good, with hot pumpkin coffee.

Camille made pancakes, she adds a pinch of cinnamon, some vanilla, and a dab of brown sugar, and fries them up in butter, oh dear they looked good. She wants to make a cake today, Char wants to make half-moon cookies, and I say blah, snow me in with fresh baked goods and expect me to be thin by spring?

Grandma is heading back to Florida soon, she was very sick back in the summer, so she stayed up here in the frozen north for way longer than she likes. She invited us down, and oh my goodness I want to go in February! We just might...we just might.

The thing about winter here is this: if we're going to get cold weather, at least we get lots of snow to go with it! It's pretty! It's rough to drive in, but it really is cozy. The whole house has that different light to it, that comes from the whiteness of outside. It feels Christmas-y, and celebratory, and just snug.

On Saturday, I am working at the basketball game, and oh dear, it's going to be cold walking into that Dome! The high temperature is forecast to be zero, (-17c), and that's the HIGH! With wind! And snow!

Better not think about Florida too soon...they have practically the same weather we do right now!!!

We are struggling with this crazy artic air as well. I am ready for it to be above freezing for a day or two. I don't mind winter but the artic cold is not for me. I might go to Florida with you. LOL!!

Hi Della....I think winter in all her glory has been extremely rude over there in the east! I see on the news every day how dreadful it is. Oh my. We get rather cold here in Alberta, but nowhere near the snow or extreme weather you do. We have a balmy -2C at the moment and the sun is beaming 🌞🌞 Almost like a heat wave 🤣🤣 Florida is having awful weather too for there. Grandma had better wait. I hope when you go to the stadium next time it’s better than the NY experience. That was dreadful..........Have a good day!