staying on the straight and narrow...

I've had a couple of days of mostly healthy eating, and it feels nice. The less sugar I eat, the less I crave. Last evening I did eat one super yummy thing: a Lindt truffle, coconut cream with milk chocolate. I could easily eat the entire bag, I am not one of those people who feel sick eating too much chocolate, or perhaps I just don't care if I feel sick, I just like chocolate.

Anyway. It's nice to just eat one, and be happy, which I am saying, but have never experienced, ha, but I ate only one anyway and mentally slapped my hand.

I stayed home yesterday, and it was nice. I decided to paint the trim on the kitchen window behind the sink, but after sanding it and wiping it down, I decided not to. Because, Anne woke up from her nap, :) Staying home all day was nice though. My granddaughters Anya and baby Elise came to visit with mama Ashley, then Ben came too, after work. I made meatballs and sauce, some pasta, and heated up some canned green beans, because that's what I eat my sauce and meatballs with.

This fine morning, Lydia came over in her jammies. She wasn't a happy camper at first, but then she got over it, and settled in, and got excited about our outing. We went to a place in the mall where the kids can run and play, down slides and through tunnels, ride little bikes and throw foam balls. Anne liked it there too. 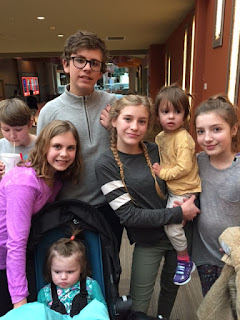 Sean and Danielle, on the left side and on the right side, then Jon, Cam, Char with Lydia, and Anne in the stroller. Kim, the mama of Sean and Dani, my sister-in-law, had the tickets to this fun place, and shared with us, so nicely. It was a good day, and the older kids were so kind to the little ones, and took turns playing with them for hours, while Kim and I kept an eye on things and caught up.:)

I like proofreading posts and seeing lots of the little smiley face things:).

Anyway. Bad weather is coming again! Tomorrow, rain turning to snow...from 58 degrees in the morning to 12 in the evening, then more snow. Paul is leaving Saturday for India, I am watching a few of my sister's grandchildren, my niece Susan's two boys, and bringing Paul to the airport. The older kids are going here there and everywhere, a few to Ohio....Emily will be back from visiting Aaron and Riley in California, but will be working.

Anyway. This is a disjointed post, started early this morning, stopped abruptly when Lydia arrived here, and started again before Jeopardy! started, then again a few minutes ago. We had a slapdash dinner tonight of all the chicken from the freezer, a five pound bag of Buffalo wings, the rest of a bag of barbecue chunks, some breaded chicken fillets, and a chicken patty. I also made a salad of fresh spinach, red and yellow peppers, craisins, croutons, and green olives on the side.

For christmas the kids got to pick a treat each. As the first one to pick chose lindt truffles they all picked that. My eldest got coconut truffles and didn't like them. His brother picked salted caramel ones and my little girl picked orange flavored. It was so goood. of course I tried them.
The best part was to say yes to buying them a special treat each. :)

also good for you to switch green beans for pasta. I do it too. little steps can make a big difference