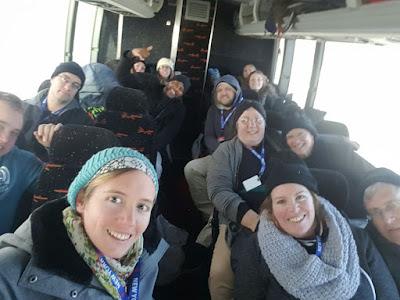 This is from yesterday morning on the bus to New York City. Here's how it went...

We arrived in Syracuse, at the Destiny U.S.A parking lot, to meet the buses at 4 a.m. We waited in line outside to be checked in, in sub-zero temperatures, listening to comments from up and down the line about how stupid we were. The bosses checking us in were seated in their warm car, which was running with heat blasting, of course. We received our I.D. tags, and were directed to bus #3. The bus had no heat. No heat. You know how you go into an empty house or garage in the cold and it feels colder than outside? That was our bus. I had leggings under khakis, and a turtleneck layered with two sweatshirts, a scarf, a hat, gloves, and a winter coat, and I shivered on and off the whole five hours plus, to NYC. The wipers froze up on the bus, the driver had to stop to scrape the ice off the windshield. It wasn't horrible, we laughed and joked and I had my thermos of coffee, we shared snacks, and tried to get a little nap before arrival.

When we got there, we waited around outside for a while, in the wind, then walked to the building (Citi Field, it WAS cool!), then waited some more in the freezing hallways. There was very little organization, and my poor legs, ha.

It was time to get our STAFF jackets and hats, and dang, the NYC Classic hats were all gone, so we got New York Mets hats instead. Then...nightmare of all nightmares, they were all out of bigger jackets, and only had mediums. Now, I had a winter coat on top of my sweatshirts, and I am not a small lady to begin with, so a medium wouldn't even stretch across my back. I persuaded David O. to trade his large, so I could at least get it on. It didn't snap up in the front, which is too bad because it would have kept me a little bit warmer. Anyway. We got our name tags, and headed to our stands. We were all assigned to different places, and I went into my stand all by my lonesome.

I admit, I was intimidated. I didn't know what this stand served, or how it was run, but in I went. I was at my loveliest, btw, with two hats on, and my green winter coat peeking out of an unsnapped outer Winter Classic shell, and oh my, my black galoshes over my sneakers. My khakis were big and baggy, and rolled up at the cuffs. So in to the stand I went. I had missed the how-to's and the what was served in what boats, so I asked a few questions, and jumped in to work. It became clear right away that one guy there was know-it-all-y and one of those Alpha male types. He bossed me around just a teeny bit too much for my liking, and I had been the one exhorting the others earlier not to take any crab from anyone. This guy tried to grab drinks right from me that were for a different lady, was telling me to hurry up, and was all up in my grill and in my personal space, so without even knowing what words were going to come out of my mouth, I looked right at him and said, "Will you please be nice to me?"

It worked. He stammered and shrugged and I do believe he saw how he was being. I was nothing but nice to him, and by the end of that hockey game, we were on friendly enough terms. There was a special needs man bunning and boxing the hot dogs, he thought a few at time would be good enough, so were continuously short on hot dogs. We ran out of cocoa, and the coffee machine wasn't hooked up. Customers waited in the cold wind only to find out we had no hot drinks for sale, and as the one lady I was working with said, "I have been yelled at more today than I have been by my husband in my entire marriage!"

So cold and unpopular, I still made some good friends in that stand. One of the cooks had three beers waiting for him for the bus ride home, and dang it, how did I think Hershey Kisses were going to cut it? What was I thinking? We shivered and worked, and I am telling you, it was cold. I tried to wipe the counters down when we cleaned up at the end, and the water simply froze immediately, and I had to scrape it off. My fingers were numb, even though the water I started with was hot. The counter bucket that was there during the game was frozen solid, and the water bottle I had been sipping from was frozen.

The ride home was better, the bus had heat, and I had some of those little warmers to warm my hands that just seemed to want to stay cold and stiff. I had put some in my sneakers before the game, and although they kept my toes from falling off, they wedged in at the end of the shoes, making my toes have to bend to fit in right, oh the complaints, I'm done now, ha.

We shared stories on the bus on the way home, got home at almost 1 a.m., 22 hours of sheer fun. I cracked out those Hershey Kisses, and the York Peppermint Patties, too. The boxed dinners they served us for the bus weren't bad, I ate those little bags of salty chips, I felt like I couldn't eat enough, after being in the cold all day.

After getting off the bus, a snowy ride down the thruway with Emily, Abigail, and Paul...

Home...ah home. I woke up at 3 a.m. with leg cramps, very dehydrated. I will be drinking a lot of water today, and of course starting my New Year's diet, like the rest of the western world.:)

Your descriptions of the day are great!! I am shivering for you. Stay inside and warm today.

Oh Della!! I laughed all the way through your report, but I am actually appalled at the same time. Fancy not having heat on the bus!! I would have died I’m sure...........I hope it at least had a toilet? The whole thing sounds like a nightmare to me as I just can’t stand being cold like that. I was born an raised in a hot country and even though I have lived here for 53 years, I have never gotten used to the extreme cold. You are a brave soul for sure. You all deserve a medal! We have a heat wave going on here........after -40C the mild -2C today felt so lovely. The sun was shining away 🌞🌞🌞 LOVELY! I hope today was wonderful and that Charlotte’s eye is getting better.

Well, the story did not disappoint that’s for sure! Della, you are the poster girl for making lemonade out of lemons. I am amazed they were able to get busloads of folks to participate in this.