is it spring yet? 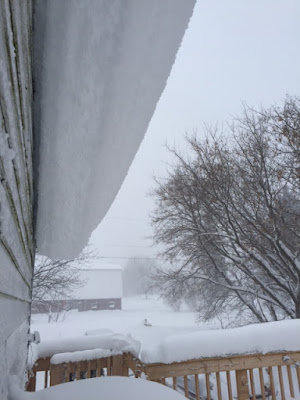 See that snow overhanging the deck, built up from the roof? 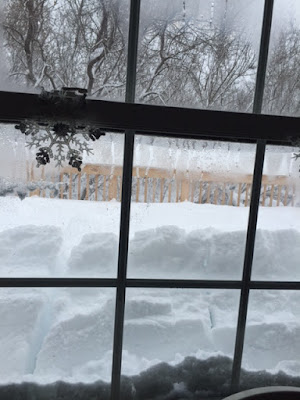 There it is, after if fell down with a huge BANG.

I hurried out the front door, which THANKFULLY I had shoveled out, that door wouldn't have opened for anyone with all that snow on the porch...anyway, Paul had just gotten home from running a few errands and a trip to the dump, so he got up there first, but I helped him shovel it out...we could NOT have gotten out the door. The snow was almost halfway up the window. It's kind of scary, to get that much snow, to almost be literally snowed in.

It's stopped now. The local airport reported 66 hours straight of snow, and I daresay, it was even longer here. Every weather map I looked at for a few days, our house was right smack in the middle of that lake effect snow band coming off of Ontario.

We have plans though, to the pool at noon, then I may go with my sister to her dr. appt., then of course we may or may not gallivant as long as we're out.

Plans are coming together for Margaret's baby shower, which we are having here in a few weeks. She is due in March. I am so excited! Guess what! I am not barred from the delivery room! I have actually been invited to be there! I am so thrilled, and honored, and wouldn't miss it for the world. But anyway, we are having the shower here. The girls have invited like 30 people, but then with our fam here too, it's going to be a full house. This all means of course, that I have to CLEAN, more than usual. Because we get used to the hard water build up on the faucets, and the stuff piled up in the hallway...but oh dear, company's coming, all of the sudden I see so many things that are out of order, too messy!

Anyway. I had this minor epiphany the other morning, as I shuffled out here in my sweatpants and messy bun, in my $4.99 Walmart slippers...(sometimes I feel so old, doing the slipper shuffle)...but I realized something that's very obvious: this is my life. It's it. This. Waking up, wiping down counters and making a fresh pot of coffee, letting the dogs in and out and giving them water. Throwing in a load of laundry. Hugging Cam when she wanders into the kitchen with her blankie around her shoulders. This IS life. When you're young, you tend to think about life in terms of preparation for the future, then you all of the sudden get old, and you try to slow it down, this life that speeds by.

So here's something really special: I'm 99% sure we're going to Florida next month! Now, lots of people go to Florida every year, no biggie. But me, I never ever went there until I had five kids, and after that it was another 15 years or so before I went again. When I was a kid, only the rich kids went to Florida. My mother used to say it was overrated, as she did with all things we couldn't afford, ha. But Paul's mom is there, and has invited us down, and Paul and I talked, and decided that although he cannot go with me because work is way too busy for him this quarter, with a few trips to India thrown in for good measure...I can go by myself with the kids. Evelyn can help drive if we go on winter break, so that's what we're doing. I am hoping and praying for good driving weather. We looked into renting a van, but oh dear, with an 18 year old driver, it's $57 per day extra!

But anyway, we are leaving winter behind for a week in February!!!

And here I sit, with kids to teach, and a house to clean. Anne isn't here today, so I have been relaxing for too long. If I was smart, I would start with little projects each day so the house would be all clean by the baby shower, so there won't be a few days of panic cleaning accompanied by wondering why the heck I waited until the last minute, along with baking the half-moon cookies or cupcakes. 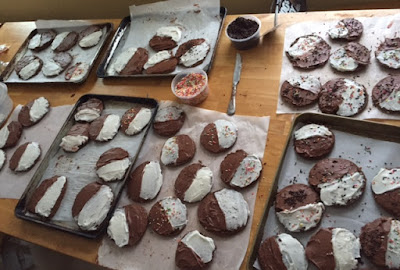 These happened the other day...I wanted to keep the little girls busy. When the high temp outside is 0, (-17.7), with 30 MPH wind gusts...they can't very well go out sledding. I did encourage them to go outside a few times, just for 10 or 15 minutes at a time, just to experience it, and because I think it's healthy. I went out at least four times a day during all this bad weather, it's so magnificent, the forces of nature. When the road is full of snow, and the wind is howling, and there is only whiteness...it's exhilarating. So they did most of the mixing and measuring, then I made the frostings and let them finish up. It kept them busy, and heated the house, but oh dear, they were hard to resist. Chocolate half-moons! I sampled a few tastes, then when they were all frosted, I did have half of one, the white frosted half. It was my homemade, no recipe, white buttercream, and on the chocolate cookie, oh yummers. But, I am behaving myself. Yesterday I did much better, and now that the entire supply of post-Christmas clearanced York Peppermint Patties are gone, I'll be really good. Because you know, a cup of hot coffee and a few Yorks, mmmm.....
Posted by 16 blessings'mom at 10:02 AM

Those cookies look delicious! I also think it is good for kids to experience the cold and weather, but my husband doesn't think they should be out if it is cold so we are always fussing if I should take the grand doll out or not. She had croup a couple of weeks ago and the doctor said, " take her outside", " cold air is good for her lungs". HA!! He should know I am right. LOL

Carol, when it's ridiculously cold out, obviously they shouldn't be out for too long, and I tell them to keep their gloves on, and not lick anything metal, ha, but it's good for them to get out of the house and romp around out there for a bit.

I have had several kids who battled croup when they were little. Mariel (Mirielle) ended up in the hospital when she was two, her airway swelled so much she could barely breathe, so she had to go in the ambulance (and ha Bad Mom Award, I was in Florida with Paul, he had to go for work so he took me along with little baby Joseph, and my mother was watching the kids...she had put them to bed, got into her jammies, then heard a high pitched wheezing, and it was Mariel trying to breathe...) One of the other things the dr. said to do for croup was to turn the shower on hot, fill the bathroom with steam, and sit in there with the sick child, then go outside and breathe the cold air. My daughter who is almost an NP says that sometimes the drs recommend driving the child to the dr office with the windows down in the car, and once they get there, the airways are opened so much more. Anyway. Croup is scary and I didn't like when I heard that distinctive bark.

The cookies...oh dear, I wrapped them up individually and put them in the 'fridge so the kids can take them to school, I told them to bring them to their friends too, just get them out of here before I go cookie crazy and eat them all with a cup of coffee.