windy and rainy and ice cream!!! 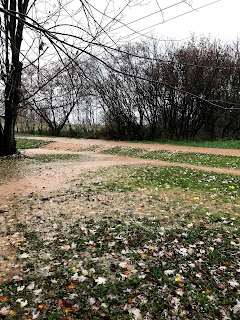 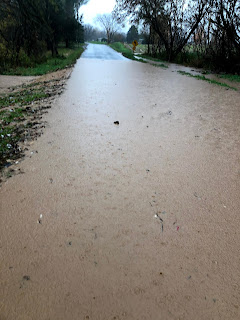 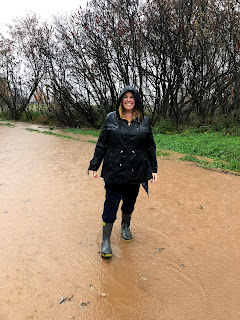 It rained and poured yesterday, into the afternoon and evening. The fields across the road flooded quickly, and the muddy water filled the road, and streamed into our yard, filling the back yard creek to overflowing.

I was glad not to be going out trick or treating. But also not glad. It felt adventurous outside, being 60+ degrees still, the rain felt nice.

So yesterday, we went out and about to get some groceries, and one the way home, saw a sign that said: 1/2 Price Ice Cream today, Last Day of the Season, at the ice cream place in town. Well. I don't eat ice cream much anymore, but what a fun thing for the kids! When Char and Cam got home from school, we went on a little adventure! Suzanne, Sonja, Jon, Char, Cam, and Anne. Five got ice cream, $7.60. Then, somehow I also bought a barrel of ice cream. It was only half full, but they were selling off their big tubs, so we came home and repackaged oodles of chocolate peanut butter swirl into storage baggies and a big Tupperware container. Because we needed it, I guess.

Our chicken wings turned out really good! Baking them on parchment paper is the trick. They get so crispy, and you don't lose that nice crispy skin because they don't stick. Flip them a few times, then..put them in sauce. Half went into a sauce made of melted butter, and a combination of two different barbecue sauces (Sweet Baby Ray's sweet and spicy, and Stubb's), the rest into a butter and Frank's hot sauce, with a dash of honey, mixture. Then back onto the parchment pans, to broil for a bit, to char up that sauce. MMMM. We also made a few trays of mini hot dogs with the crescent rolls, some fresh guacamole, and had lots of sparkling water. I also made dessert, but no one else had any because they all had ice cream...it was one of my Keto cheesecakes with no sugar, topped with berries.

We watched The Corpse Bride, which was very entertaining, somehow I've never seen it. There are so many movies the kids watched while I took the opportunity to get things done, or just make dinner, movies I've seen bits and pieces of but never had the luxury of sitting through.

Margaret came over with Wulf, it was a good evening.

Today, I am picking Miss Charlotte Claire and Miss Camille Anaya up early from school. We are going to Target. Why? Why not!

And tonight, the pool!

My coffee this morning: Maple from Aldi. It's just a hint of maple flavor, and I added a small bit of butter to it, and a splash of heavy whipping cream. It is SO good. Some wouldn't consider this a clean fast, but it gets me through the day to have a bit of fat in the coffee. I don't always, some days I drink it black. But I only eat one meal a day, usually, once a week or so I have two. So I have two or three coffees, then dinner. Dinner is low carb, mostly meat and veggies. I find that cutting out the sugar helps the cravings, but it still is hard for me. I read these other people how they aren't even tempted anymore, blah blah blah, and that will never be me. And I am not militant about the sugar in things: I will NOT have a candy bar, or even a candy corn, but there is definitely sugar in bbq sauce, and I did have a few of those wings. I had ONE of the little hot doggies in the crescent roll, because hey, it was Halloween. And hey, I'm only eating one meal a day. But for the most part, day in day out, no sugar. No sweets, no fruit, except for occasional berries, like on my special cheesecake.

No snacks, either...except for sometimes about an hour before dinner, I'll eat a handful of mixed nuts, to break the fast.

My main goal in this, is to be healthy. Several years ago, when I had my gallbladder attack, a CAT scan revealed gallstones, and a fatty liver. This news was relayed by the secretary at the dr office who called to schedule the surgery which the dr deemed necessary, to remove the gallbladder. It was never mentioned again, or brought up by the dr. So when I have been listening to my podcasts and reading from Dr. Ken Berry and Dr. Jason Fung, and a whole slew of other medical dr.s who treat patients' type II diabetes with diet, getting them off of all insulin, and help patients reverse their fatty livers...I realized that I need to take it serious, reversing the fatty liver. No sugar, intermittent fasting, low carbs, no in between meal snacking, no alcohol (I miss wine, but I think sometime down the road I'll be able to add a glass in here and there again)...

Anyway. I am just on a roll this morning, aren't I?