in which she finally meets martha.... 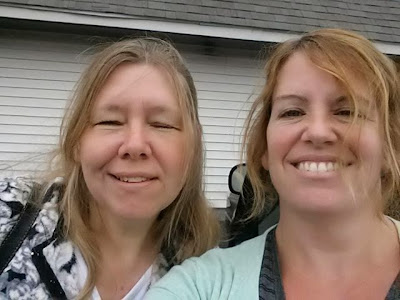 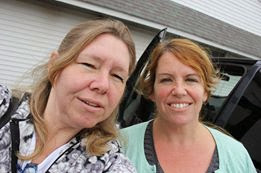 It was a new thing for me, to meet up with a blogger-friend. I was a tiny bit nervous, because I can be shy, but Martha is very natural and friendly, and it wasn't awkward at all. And, she didn't kill me. When I told my son Joseph that I was meeting my friend Martha, he said, "Don't get murdered." So I didn't.

Of course when I got home from my nice outing, I had plenty of making-up to do. I had to sweep, again, there were dishes galore, even though Evelyn so nicely got home from school and did the dishwasher. When I started dinner, I was disgusted and dismayed to find that the chicken I was going to make was spoiled. It was dated the 24th, so it should have been good. I called the store, and the girl I talked to said in a sweet little sing-song voice, "Just bring it back and we'll replace it!" I talked to the manager next. He said that he had just gotten another call about bad chicken, so I wasn't the only one. He said to throw it out (thank you!), and just come in and pick out something and tell them that, "Mike said it was okay." Um, I know...just KNOW that this isn't going to go as smoothly as Mike seems to think it will. But I did feel better that he was listening to my concerns and not making me keep rotten chicken. I told him that I now had nothing for dinner, but he didn't offer to order me some pizzas.

I just made some other chicken I had.

And I went for a nice long walk. There was a sudden crash in the woods, and a doe came running out and crossed the road and into the woods on the other side, followed by a huge buck with big antlers. Sam wants to know How Many Points, but I have no idear. He was big, he was fast, and he looked like he might have been in love with that doe:)

My princesses are being silly. Extremely silly. They need attention, so I need to get moving and give them some before them make a big mess. Char is trying to put her feet behind her head, and tasting the bottom of her foot.

I am relieved Martha didn't turn out to be a murderer. She looks a little shifty in the first picture there...

I hate when something I plan to cook up for dinner turns out to be rotten and a rotten chicken will make your stomach turn... or at least it will make mine turn. Blech!