Can I really write an entire post in one sitting these days? 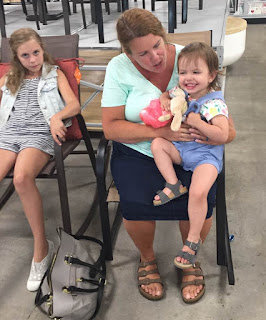 Yesterday, went to the huge-0 mall in the city. The best part was that we met Mali and her little Lydia there. We went into the Home Goods store and tried out the rocking chairs. 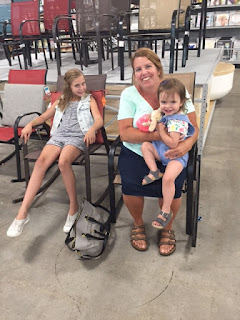 Lydia was so good at the mall. I think she liked being out and about and seeing all the people, on a rainy day. 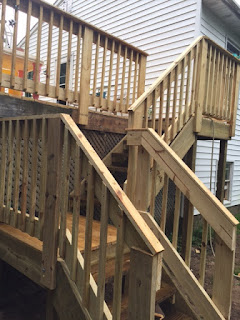 Our new deck steps...the old ones went straight down, and were steep and dangerous. 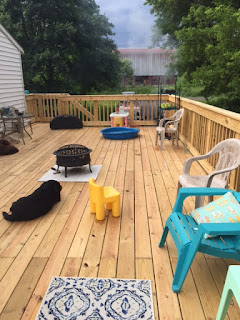 We're trying to keep the new deck nice and clean, but we still hang towels over the rails.

Today is gymnastics, the last class of the season. We considered the summer program, but it's pricey, and the girls decided they could just practice here, and have one less thing to drive to the city for in the summertime.

And the answer to my opening question is no, my brother stopped in to see the new deck, so ha, but I did come back to it. The kids are getting their lazy summer attitudes on already, no one has had breakfast yet. Evelyn left for her state test (last one for the year!), and Kathryn left for work, and Paul too. We're still on the first pot of coffee, and I have been puttering around, vacuuming, wiping counters, laundry, packing some clothes...only a few days until the cabin! Evelyn's home now...and there's nothing like blogging and nodding uh-huh when your teenager wants to talk about a test...so bye.

That is just such a fabulous deck!!!!!