of course I wouldn't! 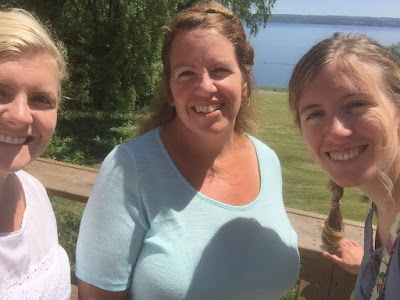 ...go on a wine tour with two of my daughters! (Mirielle and Emily)
I started out as the designated driver, not that the girls had that much, the tastings are small amounts. The first place we went was pleasant, we were the only customers, and the girls learned about "pairings", trying different appetizers with the wine. I found myself a little jar of pumpkin butter for my Ezekial toast, but it's still in Emily's car.

Anyway. The next place we didn't taste anything, just bought a few bottles because we know it's good. Do you know there's a grape called the "Diamond"? And the Cayuga White? Also, a German grape, which I couldn't pronounce, produces a nice crisp tangy flavor. The third place, the girls decided that I could taste, because Emily was fine to drive. Well. This third place, the wine pourer guy (I don't know if these people have official titles, but they are all very personable and friendly)...but this guy was over-generous, and gave us 8 or 9 tries instead of the six we chose. The Thirsty Owl, it was called, and they have some really good stuff. I am so sophisticated, each time the pourer guy asked what I thought, I would say, "yummy". ha. Mare and I couldn't even look at each other a few times.

The fourth place was a bit off the beaten path, right down near the lake, and it was lovely. The door was propped open, and kitty cats wandered in and out. Mare and I tried a few more. And bought a few bottles.

Place #5, our final stop, we tried a few...but first we asked where the bathroom was...the smarty pants wine pourer guy said, "Right to the left behind this building, there's a hole in the ground." And I said delightedly, "Oh good, just like at home!" He said I won the Best Response Ever. And the best wine there happened to be called, "Smart A$$", and of course I wouldn't buy something like that!

So now we have some bottles of wine for the camp, to share on the dock. (Ashley, I bought you some Cayuga Lake grape juice!)

Home...but first a stop in the grocery store for some strawberries, bread, half and half, burger, chicken, bacon, eggs, and ice cream sandwiches.

Then home...the kids were all gathered on the deck, with the little pool filled to dip their feet in. Emily and Mirielle took Evelyn and Sonja out to Chipotle, it was Nurse's Day for free burritos. I made a chocolate cake, to have with berries and whipped cream, a pasta salad, and burgers on the grill. I hadn't had lunch, and I think the sun and the wine triggered a migraine. I know there are a few wines that do that, but mostly I am okay, since I tried so many, I have no idea which was the culprit. But it may have been a combination of sun, not eating lunch, and the grilling burgers with the smoke going in my face. Whatever the reason, I had a really bad one, getting worse by the minute. I finished cooking, and went to bed, without even eating, since by then I felt like I was going to heave with the pain.

Ibuprofen and quiet under the covers for a few hours, then I got up and had some dinner. It was all cleaned up and put away, and I was sad that I missed some good family time. Margaret and Adrian were here...Adrian is finishing up the deck. He is going to put a railing board along the top of the railing, like a shelf. He finished the gate last night, making the deck like a big playpen for small children, and for animals. It latches really easily. The stair railings are almost done too.

This morning, more state testing, and a study session for Evelyn, so I let her just drive the van to school. Our other van, which was smashed into, is still in the shop, so no vehicle for me today. It's okay, I don't need to go anywhere, and I have to start packing for our vacation.

I still have a residual headache, and feel so drained. It was a horrible one. Right now, I am sitting in my comfy chair with a blanket, coffee, and quiet. Char and Cam decided to sleep in the living room last night, with the doggies. So they have the fan on in the window. The hum of the fan, the coolness of the morning...I could fall back to sleep.

The pool is still green, but getting better as the filter chugs away, and we clean out the cottonwood cotton. Now the weather forecast is for cooler days, wah.

Hi Della, your tour of the wineries sounds lovely! What a great way to spend time with your girls. Sorry you had such a bad headache though. My husband gets dreadful headaches especially from red wine, so needless to say he doesn't drink wine of any kind anymore as white will sometimes do it too. I just get dreadful acid reflux 😫 Your new deck is just fabulous, so when I am in your neck of the woods I will pop by and we can have a coffee out there!! I'll bring the cake 😂😂 I'm just kidding because I doubt I will ever be in your neck of the woods!! But you never know...........your holiday away at the lake is going to be so wonderful. No wonder you are so excited. Have a great day 🌞🌞

And I am busting a gut over your Best Response Ever!!!