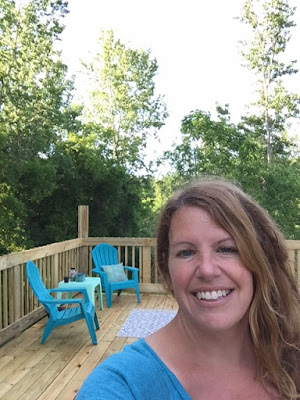 shamelessly brag about the new deck...and, well, I don't really see it as "bragging", because I am more thankful. Extremely thankful, the kind of thankful that makes me want to cry, because I can't believe it really happened, and that my favorite place in the world became such a clean, vast, open, and welcoming space. It's peaceful on this deck, because it's up near the trees, and the birds are singing, and it's just so amazing. 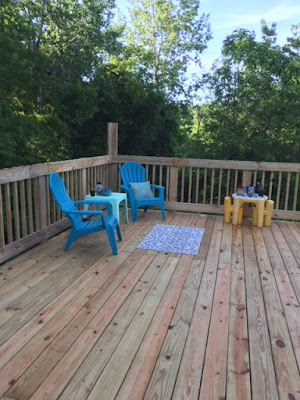 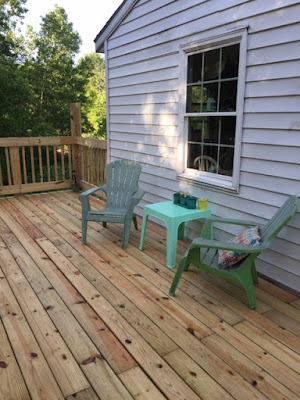 The old deck ended right smack in the middle of this window, making a nice perch for 25 years of kitties to sit on, look into dining area window, paw at the window, and be let in. It's always been a no-no to simply open the window and let kitty cat in, but even I did it. Notice there's no screen, the nice kitties wrecked that as soon as they could.

Anyway. New deck aside, there are things to do around this gosh-forsaken heck-hole, as Marge Simpson would say. The pool... 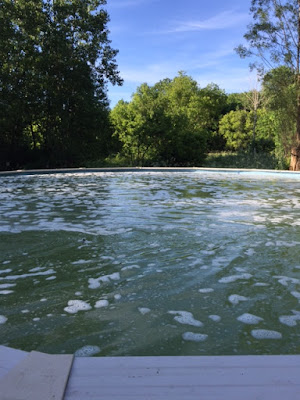 This can't even be counted as the "before" pic, because this is after dumping several pounds of chlorine shock in, and finally...turning on the filter! There was a patch job to be done, which required draining the pool a bit, the refilling it...then scooping and scooping and scooping the cottonwood cotton that flew daintily through the air like snow...and landed in the pool. This morning I went out to clean out the filter basket. I put my hand right in that basket to pull out the cottonwood cotton and the leaves, and I felt something yucky. I pulled my hand back out like it was shocked, then I reasoned that it was just a yucky leave. I put my hand back in there, and yuck! Slimy! Pulled it back out...then a third time, telling myself that it was just a slimy leave...yuck! I couldn't do it. I turned off the filter, took out the basket, and yup, it was a...frog. I did a little "I just touched a frog!" dance. eew.

So the pool will probably get clear right in time for our Adirondack vacation, ha.

Today, I am going on an adventure! Emily and Mirielle invited me to go on a wine find. We live in the heart of the Finger Lakes region, wine country! Cayuga Lake, Seneca Lake...the wineries are abundant, and the wine is soooo good! A few weeks ago, we stopped at a place on Cayuga Lake, and found this raspberry wine that's almost sinful. So today, both girls have the day off from stressful nurse jobs, they both work in the big hospital, Em in ICU, Mirielle in oncology. And it's a beautiful day, high seventies and sunny. I told them I would drive if they want to taste the wine. We are getting some for the camp, because there is nothing like sitting on the dock on that Adirondack lake, with a glass of wine.

It looks fantastic! Just a great place to hang out and relax

Our Favorite wine comes from the Glenora Winery on Seneca Lake (we visited a number of years ago)- it's called Bobsled Red. We ship it to Florida for a Christmas present :)

That deck is fabulous!!! And I'm loving the pops of colour in the furniture! One day I shall visit and have coffee with you out there