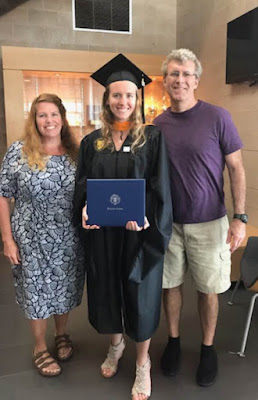 Congratulations to Emily Anne! She did it! She has her Master's degree in Health Science, and is now a Nurse Practitioner! Her graduation ceremony was very boring, but these two little girls, her littlest sisters and biggest fans, didn't complain too much. 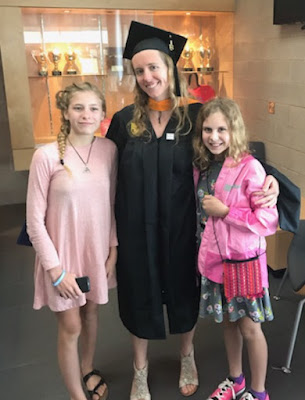 After the graduation, we skipped the after-reception, and headed toward home in the pouring rain and wind. We stopped for gas and hot coffees for Em, Paul, and I, and some iced teas for the little girls. They were as happy as can be. Sometimes it doesn't take much.

See, we had somewhere we wanted to be...the sisters' conference at our home church in Victory, NY! It was a Northeastern conference, so we got to meet friends from the West coast too. The weather cleared up and Saturday was a flawless day, warm and pleasant. As per usual, there wasn't enough time to talk to everyone, and it went by way too quickly. But I came home encouraged and happy, ready to face life's challenges with a new purpose. God is good, and no matter what comes along, He WILL give me victory.

Yesterday afternoon I went to a wedding shower for my sister's youngest daughter, Audrey. She is my sister's last and final daughter to get married. The wedding is next week in Canada, and yes, I am going!

This fine morning, I am heading over to a friend's house for brunch with some of our friends from Oregon who are flying out this afternoon. Then I have to go pick up a pool pump I am buying from Marketplace, (like craigslist). Then, I have to drive up north to drop Orange Guy off at the vet to be neutered.

Paul is on a really strange work schedule, as he is doing a project in Singapore. He has to work in the evenings, so he was here this morning, and it's weird to have him sitting at the counter on his computer while I putter around cleaning up.

Anyway, I had a good weekend. I stayed in the camper with lots of my daughters. Then last evening, Benjamin arranged to have everyone come here for a cook out. He brought the burgers and hot dogs, and Evelyn made a pasta salad. Jon had some friends here, and all of my older kids were here, except of course for the few who don't live in the area. A few friends were supposed to come over too, so Paul cleaned up the house while I was at the wedding shower..then it didn't work for them to come. I was disappointed, but partly relieved, but only relieved because I have a big hang-up about the house...I can't explain it, but I feel like even if it's clean to us, it's not up to par, and I hate that feeling. So I therefore don't want to let it hold me back from having friends over.

I also have a huge hatred of meeting new people...it's more like fear, and anxiety, and I stumble over words and forget names and feel awkward, and want to go sit in the corner. But in my heart, I want to meet people, and get to know them, so the only way to get free from those bonds of fear is to take up a battle, and call it what it is: sin. Fear of man. Caring what people think of me. Whatever name it goes by, it can't rule me. I'm tired of feeling so self-conscious, so I have been learning to say a good loud NO to it inside. Then after I talk to people, I think of things I said, and feel like a jerk, ha. I should have stayed in the corner, I think. But that's just because it's still so in me to care what people think, and I don't want to be bound by that!

It's funny, spring is here, and I have all these plans for making things nice, fixing things up. Paul worked on the lawn mowers yesterday, and he wants to start the garden soon. I want to get the pool opened, hopefully the "new" pump will work. The deck needs staining/finishing, and we need new screen doors. Our new front porch is half done, Adrian is out in Oregon with Margaret and baby Wulf, visiting Aaron and Riley. :) I know he'll finish it. He's such a good carpenter, he makes it look effortless, and he is so calm, just talking along, and measuring and cutting, and it comes to together like magic.

He's going to make Evelyn a raised garden box for the yard, because last year lots of dogs, who shall remain un-named, ran through our little garden and destroyed all the flowers. They rolled in it, and dug in it, and dang them, wrecked it.

So it's nice to make the house home-y, but also to remember that this earth is such a temporary dwelling. I have this one window in the kitchen, the one Paul put in years ago...he used a new building window instead of a replacement window, so it didn't fit right. He never finished the edges, and the sheetrock along the bottom is ragged, so I have a table in front of it that hides the bottom, but the sides are visible. Every once in a while, I look at that and it starts to bother me, but then I remember this: it hasn't killed me yet, so it probably won't kill me now. Other things just keep being priority, like last week when a bold rusted through the toilet in my bathroom and water flooded the floor. He fixed that up, likety-split, when he got back from India. I put a bucket under it and shut off the toilet, in the mean time.

He is super busy with his job. I appreciate that he has a good job, and it's nice that he also likes it. And I am super thankful that I don't work. I have enough time to do things around here, and spend lots of time with the kids, older and younger. I am extremely thankful for that. So it seems petty to complain about him being so busy. At least I can take up the slack. This coming weekend is a soccer weekend for lots of my kids, and Paul is looking at lots of work...he will be there part of the time, but...

Then in a few weeks, he'll go to Singapore for two weeks. Then the next month, again. blah.

But today is all we have, any of us. And today, I will listen to what God has to say to me, and I'll be faithful to that.
Posted by 16 blessings'mom at 9:41 AM

Yes, we have a lot to be thankful for. Despite unfinished projects and not-up-to-par houses!!! As I always tell my husband, we need to compare ourselves to people who have nothing and still have war and sickness and not enough water and doctors and on and on. You sure are blessed and always very busy!

This post really hit home. I also have a fear of meeting new people. And never feel as though my house is clean enough !! But I try to put myself out there and I'm always glad I do - and it always is more fun then I think it will be. Thanks for sharing ! I also feel blessed I get to stay home life is short and God is good Always!
Blessings from Florida-
Darla

Hi Della.........I love the photo of the two little girls and their big sister! Congratulations to Emily.....well done. We all have our insecurities.....and we all think we are not good enough sometimes. Silly isn’t it? Of course we’re good enough. We must all be very thankful for all our blessings. I know a woman who has everything you could imagine, but she isn’t happy at all. A beautiful house...all the money to do whatever she wants and she’s miserable. I wouldn’t change places with her for anything. You have a wonderful family........you have everything...........

Congratulations to Emil, what a fantastic achievement!!
You look really nice in that dress and you must both be so proud of her.

Honest words and so refreshing to read. Thank you. I share that fear, awkwardness, not easy but worth fighting it.

I was so happy to meet you! Maybe next time we can have tea somewhere quiet! By the way I don't like crowds either and meeting new people doesn't come naturally to me at all either. And thanks for sharing the little things about your life on this blog. I appreciate knowing that my life is not the only imperfect one with all the business and unfinished projects and a crazy busy husband and feeling like I don't want to get a job because if I don't spend time with young and old then who will?!

I really, really enjoyed meeting you, Della. It was just so *normal* to talk to you. And encouraging. 💜