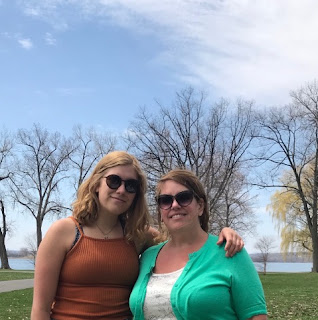 My dear daughter Kathryn and I at the park the other day... 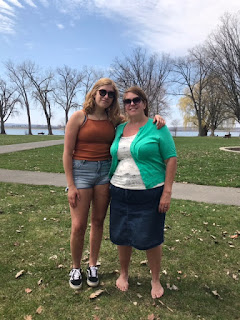 And this is before cropping...cropping a pic sure cuts off the fattier parts, eh? Ah well, a work in progress, that's me. I hate to go on and on about it, and around here I try to keep my battles to myself, as I don't want to damage my kids, especially my girls, by obsessing about weight. But the honest truth for me is that I have to be strict with myself, because when I don't consume sugar, I am nicer and calmer and make better choices. When I cut back on carbs and eat mostly fats and proteins, I lose the puffiness and feel so good.

And here's the truth of the matter:
Several years ago, I lost 70 pounds. I had to. I was so sick and tired of it, and then my blood pressure started to climb. I didn't stay at that weight, a few pounds found me again, and I maintained there for a few years. This last winter, a few more came trickling back on, and now I am at exactly 50 pounds less than my BEFORE weight. That's not terrible, but oh no, I am NOT going back to the huffing and puffing weight. BRAKES are ON. I am serious again. No spoonfuls of cookie dough for me.

The problem here is that it's ice cream season. I heart ice cream. It calls my name. There's a local place that sells this homemade stuff, and it's almost to die for. Then another place that makes it's own, The Cayuga Creamery. Just the name makes me drool.

Emily is finished with school, and although that's a huge topic, I am only mentioning it because she suggested a hike today with the little girls, and I can go with Anne too if I want. First thought I had: it's near the creamery. If I hike, I can have ice cream. First thought. And second thought, and third...

Anyway. My battles don't go away just because I have good resolutions.

Yesterday afternoon we gave away the last kitten. The very very last kitten. Mama kitty is spayed, and our Orange Guy is getting neutered next week. Finally, right? The guy we gave the kitty to seems like a great guy. I got numerous responses from the ad on Craigslist, including some scathing ones, and yeah, I did reply to one. I can't help it. I simply said, "You're right! I lied about the mama cat being spayed! I am really stupid, and am going to give the kitten to someone who will feed it to their snake! I am irresponsible! How on earth do you know me so well?!"

The guy I chose: middle aged guy, a little plump, married, deferred to his wife before committing, showed up on time, had a kitty cage to bring kitty home in, and explained to kitty that this was to keep her safe. He had a cat for 14 years and said it was a long time before he and his wife could even think about getting another, they were so crushed with the loss. He also has a ten year old, gentle dog at home who is lonely, and used to sleep with the cat. So I feel 100% certain that he is either a good liar and missed his calling in Hollywood, or that I found an excellent home for the kitty, despite being stupid and irresponsible, ha.

So tomorrow, Paul and I are going to Emily's graduation ceremony. I am so proud of her, I could cry. She is a smart girl. She graduated third in her class in high school, took a year to travel and visit friends, then went to nursing school. She then worked for a while at a hospital in the city, then spent a year in Norway. She came home, back to work, and school...classes and classes, four year degree, then on and on, until now...she is finished. She already has a job at an office north of here, in the city where Margaret and Adrian live. She will be doing primary care. She will be working M-F, no weekends, and ahh, it'll be so nice for her.

My weekend plans are totally exciting, a sisters' conference at church! It's a North American conference, so I get to see friends from far and near. My friend Tereza, I haven't met in person yet, will be there! Emily, Abigail, Mirielle, Evelyn, Suzanne, Sonja, and Charlotte Claire, and Ashley, will be there. (Kathryn is staying here with Camille, we thought Paul would be in India again, but he won't be.)

Anyway. Some of us are staying in the camper, and I have yet to go vacuum it and clean it, but why do today what you can postpone until tomorrow?

And....today is Sonja's birthday! She is sweet sixteen! I might surprise her and take her to get her driving permit...:) Sonja's birth was special, and I'm sure any 16 year old would be glad that her mother is writing about her birth on the blog. My sister came to visit me when I was in labor for Sonja, and back then, not many people had other people at their births, as is more the trend now. But anyway, my sister had six girls with her, a few of hers, a few of my older ones, and one of our brother's girls. I was in a huge birthing room, and happened to be only like an hour away from the big event, and I was so glad to see them all, I said they should please just stay. So they did! They were all lined up on the side, so they didn't see everything, but oh dear, it was one of those dream births...I knew baby was coming, and with every contraction, she was moving down, but I didn't say anything, until bam, it was time to push, and she was born with very minimal effort. I wouldn't say it was an actual piece of cake, but it was a really good birth.

Sonja K. is one of my favorite kids. She has a sunny outlook, and keeps us laughing. 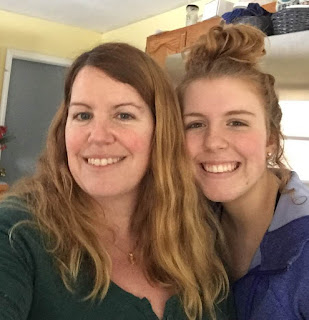 And I'll leave you with a good pic...Samuel and his little guy, Grant...my sweet grandson Grant... 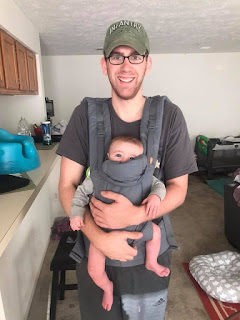 Happy Birthday to Sonja K 🎂🎂 Della......I love how you refer to each of your kids as one of your favourites 💕 The battle of the bulge is a forever battle for me too.....for many people. I always figure one day at a time and ‘ tomorrow is a new day with no mistakes in it’ .....so says Anne Shirley from Anne of Green Gables. It looks like you are having some good weather AT LAST!! Us too........thank goodness! Old man winter decided he’d had enough and went home. You have a good day and have a little, tiny piece of birthday cake! ☺️

I am glad you are getting to do the sisters conference and I hope that you have a great time. I think as we get older it is just in the cards for us to gain weight and I have just accepted it and went on.

Cant wait to meet you finally!!!