getting back into it...

To shut down the Reasoning Center, and Just Do It, that's my goal. This morning's excuse, and I kid you not: I don't need to walk, I'm going to the beach, and I'll prob walk a lot there.

I did not heed this bad advice, I went on my walk. Just to be straight here, we're talking a 1.3 mile walk. It's not running half a marathon. There IS an evil hill, and a few other slightly devilish slopes, but it's A WALK. But try convincing my morning mind of that... 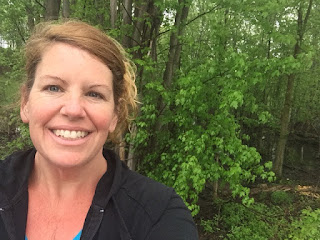 What you've got to realize is that isn't "just a walk", as far as mental well-being goes. It's triumphing over laziness, it's getting back a little bit of stamina, it's having more energy for the day, it's making it easier to pass up the sugar. 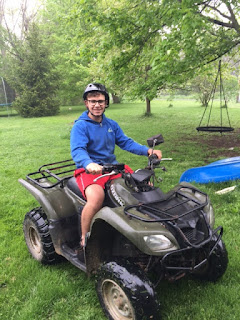 Jonathan has been saving up his money, he mows his sisters' lawn, does odd jobs, and this is what he bought, from a friend of ours. I'm happy for Jon, but ugh, as a mama, I don't like these things. Jon was just a wee one when his big brother Benjamin had his terrible accident on his 4-wheeler. (Ben ran into a large tree branch, which ripped into his leg. He was rushed to the hospital, and by the time he got into surgery, the infection from the wood was rushing up the leg, and the surgeon told Paul that Ben might not make it. He did make it, his leg had to be opened up quite a bit to flush out all that stuff, and Ben was in the hospital for a bit, he healed up nicely, and I am thankful for that. but.)

We are going to the beach today. It won't be hot and sultry, but it will be in the seventies and humid. We are going with Ashley and Anya and baby Elise. And hopefully Emily. We are down a vehicle because the check engine light turned on in the red van. Both of our minivans are getting up there in miles, but thankfully we have two of them, so we can still beach while one is in the shop. And hopefully it's nothing too serious. :(

Today is Joseph's birthday! He was born during a heatwave back in 1991. 95 degrees on the day he was born. I remember this because we lived in a mobile home. We had purchased our land on which to build this house, but we were still living in that trailer. (We moved in here when Joe was 11 months old). Our mobile home was hot when it was hot out. And when I got to the hospital at 4 cm dilated, and was offered to stay or go home and come back when I was farther along (which seems crazy with a fifth baby!), I chose to stay, it was much cooler in the hospital. I came in with my sister Cheryl, and some of her kids, and 3 of mine, we had been headed to the mall for the coolness...and I do wonder, who on earth goes to the mall with small children on their due date? We turned around halfway there and all trooped into the hospital because I realized that those pesky little contractions were actually coming five minutes apart...)

I got there at noon and he was born at a quarter to midnight. It was a long day, but such an easy birth, he was born with such minimal effort. He was a long baby, and he didn't like to be swaddled. His feet would just stick right out of those receiving blankets, he stretched right out. He's always been so easygoing.

Anyway. We are supposed to be getting ready for the beach. I like to sit here until the last minute then scurry around like crazy. (Can I just mention how different it is to get ready these days? The kids get their own suits and towels and we don't need to lug the playpen and the pram...)

But we still bring the pails and shovels, because I like building sand castles, ha.
Posted by 16 blessings'mom at 9:43 AM

As long as he uses common sense on the 4 wheeler, he should be fine. My little guy (now 11) has been racing dirtbikes since he was four. I would insist on a DOT-approved, full-face helmet though.