to be used for good things...

A long time ago, I lived in a mobile home. It was really nice because we bought it brand new, it was a step up from the first one we lived in. It was bigger and, well...it was new and shiny! The cupboards were made of plywood, and the sinks were plastic, but it fit our needs, and we were totally blessed to get an opening in a really nice small park in Paul's hometown. It was a spacious yard with plenty of trees, and we really liked the place. We had five kids in that trailer. When Paul changed jobs, we started thinking about buying a house.

The houses in our price range were rampant fixer-uppers, and with five small children and not a big budget, we were hesitant. I had a feeling we would buy a dump and it would stay a dump, ha. So my brother offered to build us a house. He had built two, and and was not a builder by trade, but an electrician. But we decided to go for it.

We bought our land, which was a corn field.

We had the foundation built, the basement bricked, the septic system installed.

Then the house was framed, when baby#5, Joseph, was just a month old.

We moved in when Joseph was 11 months old, and by then we were expecting #6, Aaron.

I remember when we first moved in, the thankfulness that filled me because we lived in a huge new house. It's a simple house, built with the cheaper options on doors and fixtures, but it is well built and sturdy, functional and spacious. It's really a big rectangle, and the kids on the bus used to say it was a hotel. We never got around to putting shutters on the windows, which is okay now, because I don't like them anymore ha. But anyway, I remember sweeping the floor one day after we first moved in, and telling God, "Thank you SO much for blessing us with this house. I promise to use it in a good way. For goodness and fellowship."

I felt like we were so blessed to have this place, that it was only logical to pass the blessings on. So, through the years we have had an open home, as far as we've been able. If someone wants to come over, if Jon wants friends here, if the girls want a gathering, if Paul wants company, I try to just say YES. It honestly isn't always easy. Things are always crystal clear in theory, but when it's time to have company, and the house is a mess, dang, I don't feel like it. Then there's the I Just Want To Hibernate thing, my longing for just peace and quiet and some ME time. Everyone has to find their own way through that particular thing, but for me, seeking that doesn't bring peace, but sometimes when I land in it, I enjoy it immensely.

I have to die a million deaths when the door is simply open for company. Because things around here never seem to be as neat, as clean, as organized as I would like. But it hasn't killed me, and people seem to still like to come over.

One time we had a young man over for dinner, and he held up his fork and said, "I get the bent fork!" I was a little embarrassed, the tines on that fork looked like someone had used it to pry something out of something, going every which way. But that young man married my niece, and I now babysit for his little Anne, and his little Davian came over yesterday for a fun-filled visit. 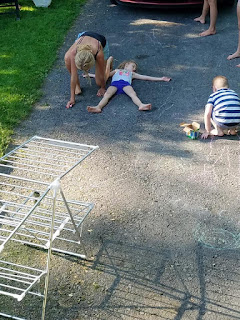 (Suzanne, our 17 year old, is EXCELLENT with little kids. She traced Anya and Davian in the driveway so they could color themselves...) 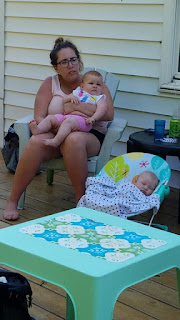 This is my daughter Margaret. She is holding Ben and Ashley's little Elise, and her own baby Wulf is sleeping in the little seat.

Our pool isn't perfectly clean yet, but it is refreshing, and a work in progress, like me.

My phone is broken. It has been acting up for some time now, but now it won't turn on at all. I had to borrow Jon's watch last night so I could take it in my room so I could check the time in the morning, to make sure I got up with the school girls. I feel rather lost without the phone, they become so vital. Emily is going to Verizon today to check on our plan and see if we can disolve it, because of a million reasons, so maybe I will go with her and see what's up with this phone, get a different one, or whatever. One question: how can all these people afford these iPhones and Samsungs? They are so expensive.

Exciting things are happening though, Evelyn is graduating from high school and we are planning a party for her, and Emily, who graduated from college. Em and I might go for a little trip to the west coast to visit some friends out there, too. Paul is leaving for Singapore on Friday. Our huge cabin vacation is coming up in June.

This is the longest stretch of peace and quiet I've had in a long time. The dogs are snoring, and the birds are singing. I have tended to the pool, wiped down the counters, and put on the coffee, and that's about all. The homeschoolers have to be awakened, and and and...
Posted by 16 blessings'mom at 8:57 AM

Hi Della......I saw a funny thing once....it said “I put get well cards around so if someone comes over they will think I’ve been too sick to clean!” Brahahahahahahaha 😂😂😂 I always hope if someone pops in they’ve come to see me not to look at the house. I’m sure your friends and family do the same. I had a neighbour many years ago who had 4 children in 2 years......twins in the middle and all a year apart...and her house was always a jumble, but I loved going there. She was so warm and loving and always had coffee on and fresh baking and couldn’t have cared less what the place looked like. It was unimportant to her. Sometimes we worry too much........ I love the photos you post!

first, where on the west coast might you visit? and second, how come some home-school and some go to regular school? have always been curious.

and then this: i always felt that same feeling about needing to share the blessing of my home. over the years, i have had homeless kids live with us, lonely folks stay over, tons of meals shared with an army of people and kids galore know that this is a safe home. i don't plan to change that any time soon!

Marilyn, the get well cards story reminds me of advice from my sister: after you have a baby, keep your jammies on for a week or so, because as soon as you get dressed, you are back to housework.
Terre, Emily and I are going to Eugene, Oregon, to visit my son, then to Salem to visit our church friends.
As for the schooling thing, I have always tried to raise the kids as individuals. When Benjamin was in high school, he decided that he needed to get away from influences in school, and homeschooled for a few years. He still had a rough time of it, but that's another story. Then Kathryn decided to homeschool for tenth, eleventh, and twelfth grades for the same reason. Emily, Abigail, Mirielle, Joseph, Aaron, Mali, Samuel, and Margaret graduated from public school (and some from college too), now Evelyn, Suzanne and Sonja are in high school, and doing fine. Ev is graduating this year. Jonathan homeschools because he is an active boy who wasn't thriving in school, he's quick and didn't need all the busy work. Then Camille and Char were in elementary school, and it took up soooo much time, soooo much homework, and soooo much repetition...so we opted to start homeschooling them, too.
I love hearing about your home, isn't it interesting how much more we get back than what we give, concerning blessing others? :)

My very first "HOME" was a mobile home. Lord , I loved that home. It was a 3 bedroom, brand new and we got it for a steal! Had two kids there and it was just comfortable. Then me and my husband split up after 12 yrs. Fast forward: I met someone wonderful and we bought our mobile home together. It was to say the least HORRIBLE! LOL But we got that for a steal , put a lot of extras in it. And made it brand new. Now we own a home. I love our home, but its so big that sometimes I miss the quaint ness of the little home. If that makes sense.
The fun part? The pool we put in when we moved in. The grand kids love it! And that makes it so worth it!! Jacob who is 7 just jumps in even below 70 degree's! He is the brave one!

I commend you for raising your kids free spirits. To make their own decisions when it came to schooling. Smart mama!

O my!!! I struggle with having people over ... because the house is never perfect enough! But when people come over and I have large gatherings ---sometime people need to stay for long periods of time because I live in Orlando close to Disney… And after it said and done I look back – I actually enjoyed myself and had fun!!! They must have fun also because they keep coming back 😀 Thanks for sharing your blog… 💗 Seeing that others have the same struggles helps us all!!
Blessing
Darla