Okay, we all know what spring is, but have you LISTENED to it? The birds, even the down the road neighbor's lawn mower humming...the tractors going up and down the road...
And the smells! That sweet aroma of fresh grass.
And those little newborn baby leaves on the trees, in the distinctive just-bloomed green.
The pear tree decked out in blossoms.
And the warmth, oh how nice to mill around in bare feet. 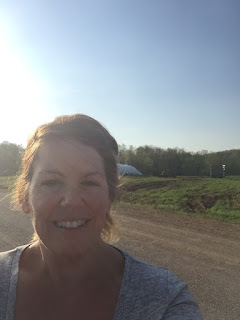 I walked this morning, two days in a row now. Why, you might ask, don't I just do it every day? Well, see, my knee was really acting up, so I rested it, then I had to psyche myself out all over again to get started back in on it. My knees are just not so good, lots of arthritis, and the doc said many years ago he would like to see me "get ten more years out of them before replacing them".

And I don't want to do that.

But it's scary, the prospect of not being able to walk. Sometimes getting out of the car, or up from a chair, the one knee doesn't want to support me. That's why it's vital to get some of this weight off, too.

We have the "new" pool pump which I bought second-hand, so hopefully our pool will be opened up soon. We spend lots of time outside yesterday, even took a dip in the hot tub, without cranking up the temperature (80 degrees).

Anne is here now, and we spent a bit of time outside. She likes to wander around, go down the slide, and today she tried out the glider on the swingset. She visited the three girls in the tent, Charlotte Claire, Camille, and cousin Danielle. They have been bugging and bothering to sleep out, and last night they had carefully checked the weather forecast, and told me that before they even asked, so I knew what they were angling for...and I surprised them and said yes.

Today, Kathryn is taking them on an adventure, water-falling. I am going on my own adventure with Anne and Jonathan, to pick up the Orange Guy from the vet, where he was neutered. what fun, eh?

Anyway, we didn't spend too much time outside because little miss doesn't want to hold my hand, and I was trying to veer her away from walking where there were lots of broken sticks. She had removed her shoes on the slide, and was barefooting it. I didn't want to fight her, just protect her wee little feet, but she was having none of it, so I scooped her up and here we are in the house again.

She has had a diaper change, and half a banana, and is playing with the dollhouse toys. She is standing in the dollhouse pool right now, ha. She has a super long attention span with toys, actually. She's having the grandma doll jump on the bed.

Last evening, I went on a small outing with just Evelyn and Camille. I had the sense that Ev needed to spend some time with me, it's been a while, so off we went. We got a housewarming gift for Benjamin and Ashley, as they are closing on their house next month. We got birthday presents for Miss Char, who is turning 12 on Friday. And, we got 9 potted flowers from the dollar store, along with some nice flower pots and wildflower seeds.

Now, Wendy's is not paying me to say this, although they really should, but they have yummy salads. I ordered the apple/pecan salad with grilled chicken, hold the crumbled blue cheese, and extra pecans, please. It comes with a raspberry vinagrette, which I skipped. It has craisins in it too, so yum. The pecans have this coating on them that's spicy, so it's a good taste, and I really really enjoyed it. The girls wanted just a Frosty, and yay us, a special on them, 50 cents! So we ordered eight, of course, so the other kids at home could have one.

And I didn't have one. Nary a taste.

Oh great, Cam just knocked down a glass jar in her room as she was bringing her bedding back in from the tent. A glass jar filled with sand and shells. It did break.

They are at least taking care of the tent, without being told:)

I tell ya, after losing a day a few weeks ago, I am trying to remind myself what day it is every morning so it doesn't happen again. I felt so OLD. I saw my kids looking at each other, the raised brow thing, yeah, mom's getting senile. I am NOT. But it felt so strange, because it wasn't just a few hours or a few minutes of having that extra day in there, it was several days. I think I just thought it was Wednesday twice, then when it was actually Friday, I totally thought it was Thursday. It was so discombobulating.

They are cleaning up the broken glass, vacuuming now. How did they get so responsible?

We have some school to do before they go adventuring, so bye for now...
Posted by 16 blessings'mom at 9:48 AM

Hi Della.........my husband had both his knees replaced and said he would do it again in a heartbeat. It gave him a new lease on life....so don’t be afraid. Great you are getting spring at last. We have had some fabulous weather too.....29C........then this morning it’s 4C!! I bet the girls had fun sleeping outside in the tent.........my girls loved that too when they were kids. We are volunteering today at the hospital with one of our dogs........we love doing that. So have a GREAT day and enjoy the beautiful day. One thing about living in a country that has long, cold winters, we really appreciate Spring when it gets here 🌞🌞