a moment of silence...

Today is a sad day in the history of the United States. And as Sonja K. pointed out, most of the kids in school today weren't even alive in 2001. New York state has a new law, allowing schools to start the day with a moment of silence.

They probably don't get the significance. They KNOW what happened, and I've told my children how it was, from my own perspective. Today I mentioned to Jonathan how strange it was during the four days of planes being grounded, to look up at the sky and...no planes.

It's strange to fly on 9/11, but nonetheless, I drove Paul to the airport today so he could fly to Boston for work. Suzanne and Jonathan stayed here with little Anne. I took the opportunity to go to the store. I mean, chuck roast is on sale for $2.99 a pound! And the bone-in chicken breast, 99 cents a pound, as well as pork chops, for 99 cents a pound. We needed a gallon of milk, and the girls "needed" nail polish remover. I also got some coffee, a pound of butter, and some seltzer water.

Home, ah home, I put some chicken in marinade for dinner, and froze some in the marinade (a few glugs of vinegar, a glug of olive oil, some Montreal chicken seasoning). I also put the chops into some similar homemade marinade, and froze on of the chuck roasts. Tonight, barbecued chicken...I'll roast it in the oven first, then put it on the grill. Tomorrow, chuck roast in the crock pot. Friday night, leftover beef or chicken soup form the leftover chicken. (Sunday is beef brisket). Saturday, we'll see!

It's hot and humid today, but my pool has started to turn, we stopped running the filter. Fake autumn tricked us, ha.

Isn't my sister cute? She does NOT look 64. And Anne and her little cousin Elena...adorable. 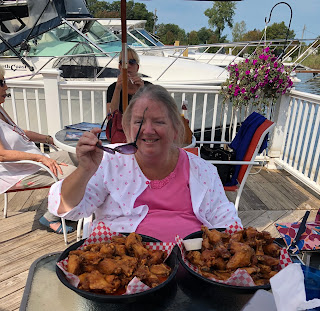 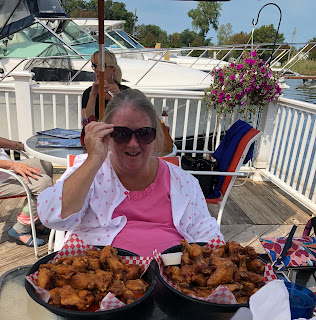 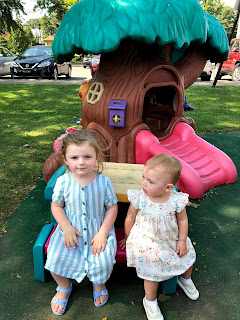 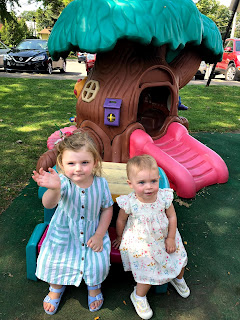 I imagine that it would be hard to fly on Sept. 11 I remember those days following the attacks and how odd it was that no planes were in the air. I cant imagine learning this in a history book as the feelings of actually living it are still so real to me.