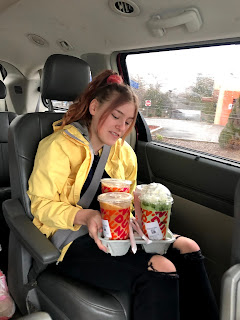 Well, donuts are kind of essential. I do not eat them, but the kids don't mind a free one every once in a while. I did enjoy a coffee though. It's hard to believe it's been a whole week since the last free donut Friday, the days are flying by. Each time we do something like go to Dunkin, I think it'll be the last time for a while.

We did venture into Walmart today, and I think I can safely say it'll be the last time, for a long time. We went to get ammo for Jon's rifle, and they were all out. We also looked for a Chromebook, as we have four homeschoolers now, as well as a home-college-er. They're doing more work online in Google Classroom, so sharing isn't working. They were all sold out. Sonja, Char, and Cam waited in the van while Jon and I got a few groceries as long as we were in there. But people do not seem to be able to fathom the concept of social distancing. In the meat aisle, Jon and I waited a considerable distance away from a couple who were looking and deciding, then a woman came waltzing in between us and the couple, with a very handicapped woman following her, in a wheelchair. ??? The employees there didn't seem to get it either, talking to each other so closely, getting close to customers, it was nerve-racking.

Jon and I checked Staples, no laptops. We checked BJ's, no laptops, but we got the...uh-hum, FIVE POUND package of...Twizzlers. Red licorice. The girls have been asking for it. We would have been better off with a small package from Walmart, but didn't think of it in there, so in the warehouse store, well, it comes in five pound packs. We also got one package of toilet paper, and some Hershey Kisses, also in the economy size package, but we'll suffer through it.

BJ's was a much better experience. A very nice employee was sanitizing each cart and offering hand wipes to each customer, and it's so spacious, being a warehouse club, we had no trouble keeping our distance. We are pretty well stocked, but if we need anything, it will be our choice to go there instead of Walmart.

Home, ah home...no new Chromebook, but we can either order one, or work it out. 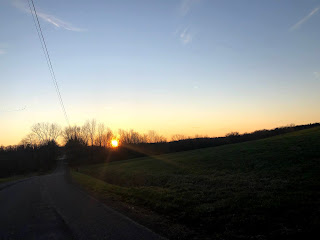 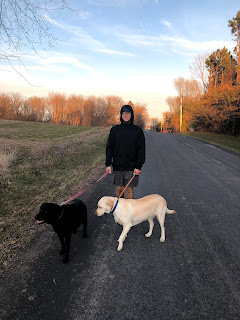 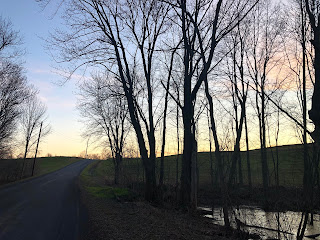 Jonathan grilled the pork chops, which we had marinated in vinegar, salt and pepper, and some steak seasoning. We made mashed potatoes, and a simple salad. 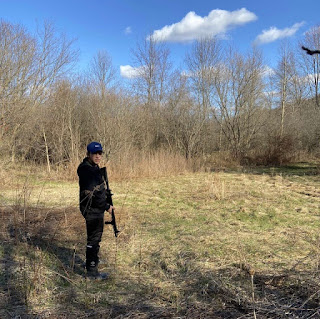 The boy with his new gun. 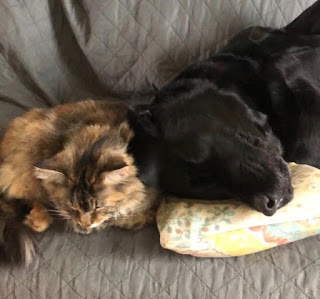 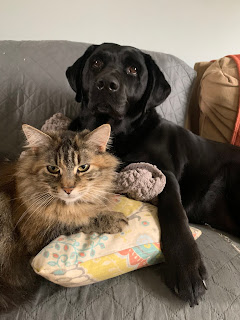 If only people were as smart as animals...I love how well they get along. 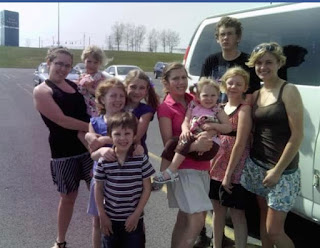 Ah well. Camille is done with her schoolwork and wants to write, using, yes, my computer. So bye for now...
Posted by 16 blessings'mom at 2:07 PM

Wait, all I saw was free doughnut, LOLOLOL. OH...Walmart is getting on my nerves...and that is all we have here in Hornell. As for ammo, umm...the governor signed an Executive order that gun shops are to be closed and that includes buying ammo. We went yesterday to get ammo and the gunshop sign said, "By orders of the governor, due to the Covid virus, we have to close. We are non essential." What the haysticks...so, I think Walmart has ammo, but they are not allowed to sell it (our gun counter at our Walmart is closed)--just saying...

We're done shopping for the next month, we have had enough, Della...just saying, sigh.

Coach got a shotgun as a gift from our Lolo a few years ago and he still hasn't gotten any ammo for it. Me: "Well, if someone tries to break in we can just throw the gun at them."

Hi Della 👋 Good to see you are all healthy and happy 😊 We’re good here too.........yesterday my husband went to get groceries!! I would prefer to do it, but with my asthma it’s unadvisable. I placed an order with my butcher and drove over there and my hubby went in...only 3 people at a time as it’s just a little mom and pop place. I like to support local and their meat is so good. Then went to get dog food at the local pet food store and lastly........the liquor store for some wine!! Anyway I think we are good now for several weeks.....maybe some produce etc. It was great to be able to do a big shop ourselves.......we so appreciate our family for picking things up for us on our 14 day lockdown though. You guys seem to be doing really well. It’s nice to live out in the country I would think.........walking in the nice fresh air. I love the picture of the kids 10 years ago 🥰 Keep well..........

Yes.
People.
Here they just don't seem to get it.
I am hoping for some nicer weather here so we can go for a few walks.
Stay safe and cozy!

Does their school have chromebooks available for use? My daughter was able to bring one home and it has helped a bunch. I don't know why people won't take it just a little bit seriously. If this was just a flu outbreak that was bad enough to shut schools down, people wouldn't be standing so close to one another!
Even in stores with the markers on the floor people like to get too close. So annoying and scary.
Take care!