OH NO, NOT A MIGRAINE!

It started out innocently enough, and stupid me, I underestimated it.  I'll just go to sleep, and it'll go away. Well HA.  It did NOT go away, no, instead it brewed into a MONSTER.  It was hands down, the WORST migraine that I've ever had.

Pain levels though are hard to judge.  Each migraine might feel like the worst, when one is in the throes of it.  I didn't actually throw up, but I certainly almost did.  It throbbed and stabbed and hurt and ached and I couldn't even move my baby finger without having such intense pain.  Now we've already established that I am a huge drama queen, but this...oh dear.  I took ibuprofen, and I took acetaminophen, then an hour later, I took some more.

Ever so thankfully, I didn't HAVE to get up, so when the pain started to recede, I fell to sleep, and oh dear, that blissful absence-of-horrible-pain feeling...not that it totally went away, but after that intensity earlier, I'll take it.

I didn't sleep long, because I had a scavenger hunt date with Abigail.  We had five places to go, and I didn't feel too awful, considering.  We had lists of things to get for the big youth conference this weekend, almost 600 kids, our Canadian friends finally able to come to things.  We bought marshmallows  (500!) and graham crackers, ping pong balls, lengths of rope, and markers for games. 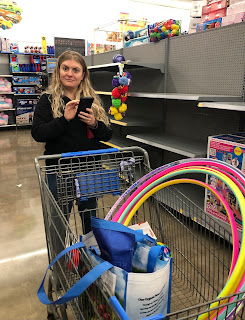 Mariel and I did some shopping on Saturday, too.  Empty shelves in Walmart, sadness.
We bought 60 big pumpkins, and 20 little ones.  We're picking up 500 apples tomorrow.  The kids are having pizza on Friday, we've had to order from several places, ordering as many as they can make.  It's a lot of kids!  They'll be going four wheeling, ziplining, some will go to a recording studio to record a song.  There will be a massive scavenger hunt, plenty of good meals and snacks (a waffle party!), as well as encouraging meetings.
I can help out with things this week, but Paul and I are going to Florida for the weekend, which I am both happy and sad about.  I cannot wait to see my mother-in-law, she is an absolute gem, such a spunky but sweet lady, and I am looking forward to some down time with Paul, and a trip to the beach, ahhhh.  I am also bummed about not helping more this weekend, although there is plenty of help.  (Evelyn is flying from Seattle to attend this conference!)
The visit with Sam and Grace and little ones was fantastic.  We didn't see Samuel much, as he was at Army drill, or playing Army.  It got real though, he was forced to be vaccinated.  I am not going to say anything else about it, but rrrr.  Oh, you have freedom to choose, but if you don't, you're in big trouble.  Dishonorable discharge,  (or LESS than honorable...)...the works!  After eight years of service, too... 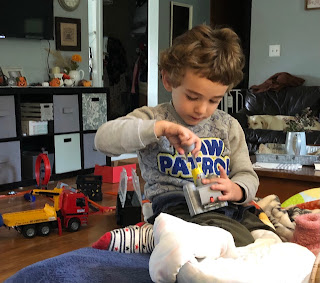 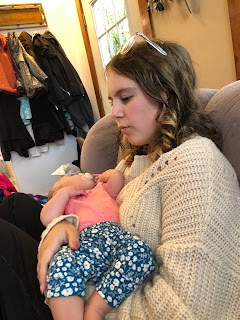 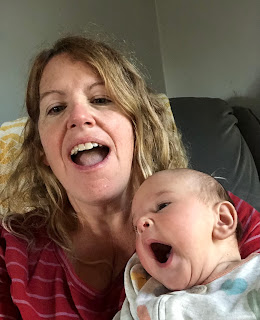 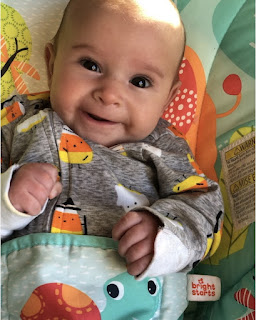 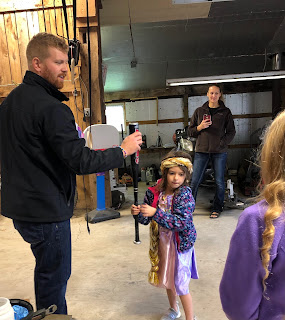 Elise had a birthday party, this is out in their barn for piñata time.  Benjamin, Ashley in the background, and little Lydia taking a whack at it. 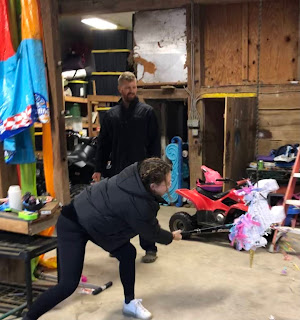 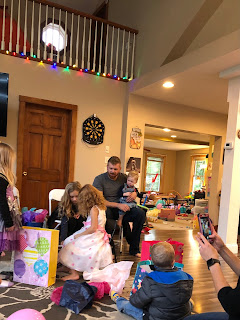 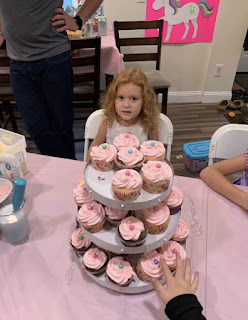 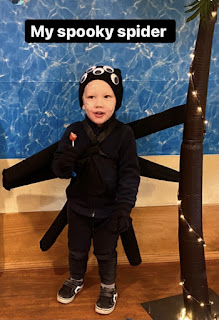 We had a party yesterday for the activity club kids, Wulf was spooky! 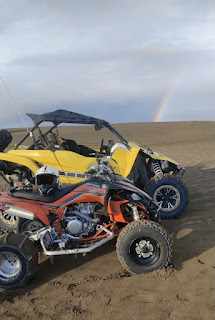 Jonathan had an outing out in Oregon, four-wheeling in the sand! 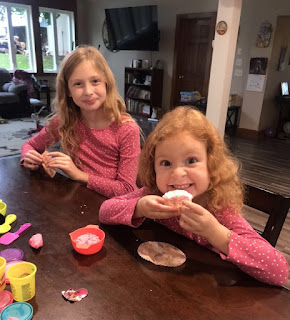 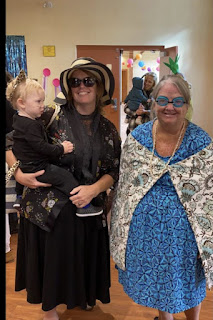 Here I am holding Tennyson, with my sister Cheryl, at the a.c. party.  It was beach themed, so I was a sand witch....Cheryl was some sort of sea-lady....she's so much fun, and such a good sport.  Tennyson didn't know what to think...
Ah well.  So much to do, but I'm thankful for the busy life.  I bought new curtains, and actually new curtain rods too.  I do not like draperies, curtains, window coverings, just little valances, simple things, so that you can see outside, and the house is bright and light.  But I started thinking about heating bills, and decided to try some insulated curtains in the living room.  We have like 98 cent curtain rods, and decided to go ahead and splurge on black cafe rods, because the curtains hang through the grommets, and well, they'll look so much better...they were less than six dollars each, as I had a 15% off the total purchase at Ollies coupon.  (I had too much fun in there, oh dear!)
I am thankful to be feeling better.  I still feel washed out, worn out, and blah, that after-migraine feeling, yet also jubilant and euphoric, because the pain has dissipated.  It's a humbling feeling to be so broken down, to realize how frail we really are.  I prayed for those who live in chronic pain, and for those in nursing homes, and for the homeless, and for the cold and tired and hungry.  As much as I don't like to suffer, it truly does make me think about things.
In prospective, we have absolutely nothing to complain about.  If we are inside a dwelling right now, and we've had supper, we're good.
All right, off I go...I was just face timing with Kathryn and little Achilles and baby Rhys.  Jonathan is out in Salem, he went to a football game with Darius, to watch the Saints play...not my thing, but they were pretty darned excited....
Jon will be back a bit before midnight on Wednesday, then the kids all have to be Covid tested on Thursday, before the conference, just to be safe....Evelyn will be flying in on Thursday, I get to see her just a bit because we're leaving Friday morning...
.

I hope our beautiful Florida weather holds for your visit. It has been beautiful these past days! I am glad you will have a bit of a respite from all of your business! Safe travels!! xo

Please do try Excedrin for your migraines....it's the only thing that works!

You guys are the best!! Those 600 kids will have an epic weekend, no doubt. I love having a glimpse behind the scenes. Blessings for your weekend away and migraines begone!

Those pink cupcake look so pretty and delicious! Great job Ashley! Your granddaughters are growing up too fast, I remember when Anya was born…how has it been 8 years already??

Sorry about the dreadful migraine. I get them too and it’s the worst. I’ve had a few ER visits in the past due to vomiting and not being able to keep meds down, needed IV. Also some that lasted for entire weekends. So I understand the need to be proactive and regret when you aren’t…lol. Glad you’re getting better now.

Enjoy the weekend in Florida! I’m in southwest FL and there’s a “cold front” (haha!) coming, it’s supposed to be nice this Saturday & Sunday, 70’s-80’s.

Hi Della! What fun you all had at the party 🎉 it hard to believe she’s 4………..wow! I’m sorry about your migraine………owie. My husband gets cluster headaches….awful. What I’m wondering is this…….where do 600 children/people stay? That’s a lot of folks to care for 😳😳 You and Cheryl are hilarious 🤣 🤣🤣