warmth and goodness, and freedom.... 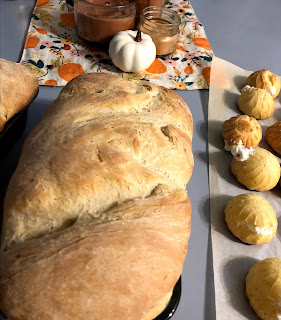 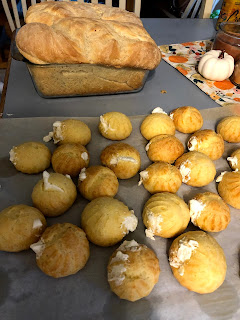 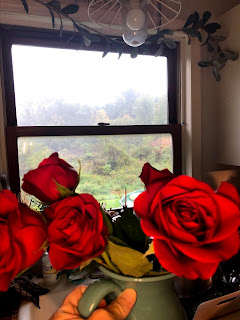 And, Paul brought me flowers!

So life IS all sunshine and roses, but not all sunshine here in central NY state, no, there is fog and rain and gloom.  On such a foggy, rainy, gloomy day as yesterday, the homemade bread and soup were amazing.  I cubed up that chicken, dredged it in flour with salt and pepper, browned it up in olive oil, then added chicken stock, simmered it for a few hours, added potato chunks and carrots slices, sprinkled in some rosemary (lots of rosemary!), and mmm.

Kneading bread:  why is it so fulfilling?  And bread:  why is it so absolutely delicious?  It's not something I normally eat, at all, but I couldn't resist a slice, and it was all I could do not to just go back for more, I mean, wow, so good.   The kids appreciated it too.

Has anyone heard of the atrocious show that's streaming, Squid Game?  It's all the rage, set in Seoul, in Korean with subtitles...the girls started watching it, and oh my goodness:  it's hard to process, because it's so intense.  It's one of those things that is so awful you can't look away.  Way too violent for younger kids, it's not just violence though, it's a Korean drama, K-drama, so popular with the teens.  The dialogue, the relationships, the emotion...it's just intense.  You've prob guessed that I'm watching it with my teenagers...

Can I just say one tiny bit about freedom?  Since WHEN is it "misinformation" to say anything that isn't mainstream?  Ask anyone who grew up in Romania or the former USSR about believing everything the media says, or about trusting the government.  Think about it.

End of rant, okay Mary:). I get it, I do.  With my whole heart, I want to believe in the goodness of mankind.  I am thankful for true friends, and for my blogging friends.  I believe that God is a rewarder of those who do good, and that our kingdom is NOT of this world.  Most of the things that are happening are way beyond our control, yet I feel an obligation to at least speak out...especially so my kids can grow up questioning things, not taking everything at face value, although that IS more blissful.  There used to be a billboard in the city that said ignorance is bliss, but it won't stand up in court.

Anyway.  Today, I am going to attempt to put up some hooks in the main bathroom.  Jonathan brought me a piece of recycled wood, torn down from something or other, Paul cut it, I sanded it, and spray painted some hooks black, and will screw them into the board and hang it up, for hand towels.  I have some other things to clean and sort, then when Miss Cam is finished with her work for the day, we'll run some errands.  I will not panic buy because the supply chain is strained, but I will stock up on some of the things we eat regularly, like crushed tomatoes and I'll get a few bags of flour.  I have a big container of yeast in the refrigerator, and shh, it's a bit old!  But, it still works!

We're taking our minivan into the shop this afternoon, finally, it needs an inspection and probably some other work done on it.  It's all insured, sitting in the driveway, not being driven because of the inspection.  We had brought it to a shop in town, and the guy had all sorts of issues and excuses as to why he wasn't getting it done, we finally brought it home, and...had all sorts of our own issues and excuses as to why we didn't bring it else where.  Bottom line:  Jonathan is driving a little V.W. stick shift he bought for $200, and has replaced the clutch, and a bunch of other things, it starts fine some of the time, ha, and he really wants that van running as a back up.  Sonja drives one of the vehicles to college on days she has to also work, other days she rides with her friend.

Only four kids left at home, and now that I've experienced how quickly the days and weeks and years fly by, and how they just slip through your fingers, just grow up and move out, I'm trying my hardest to stop time, to slow it down, to savor the moments, probably spoiling the life out of these last four kids ha.  They're hard to spoil though, because they're good kids.  They will not get things just to get things.  They don't ask for anything unless they really want/need it.  The younger girls have basic model iPhones, bought with their own money, no service on them so they work when they have wifi access.  Sonja K. and Jon have service because they pay for it.

So we have to balance blessing the kids and making it good for them, and spoiling them...mostly though, I try to listen to them, to be here for them, encourage them...

They're not perfect angels, if you can believe that.  Sometimes they leave their clothes in the washer and leave for the day, or in the dryer, or sometimes they leave a frying pan on the stove from a grilled cheese sandwich.  But usually, they take care of things, they all do their own laundry now.  Miss Charlotte Claire wakes up on her own, takes care of her own school clothes, packs her lunch, gets all of her school work done, all on her own.  I make sure to get up by 6:45 so I can see her off in the morning, and usually see Sonja flying out the door too, with her stethoscope and her coffee and her heavy stack of books.

The goal with kids is to lead them to a place where they can stand on their own two feet.  It's a rip-off because once they're standing, those feet are pointing away from you, and off they go.  It's not really a goodbye, you still see your grown kids, but once they move on, move out, it changes, of course it does.  I remember the way I saw my parents' house through different eyes after moving out, and I can see it in my older kids too.  It's home, but not home. They do come here a lot, and I am thankful for that, but it's not like when they all lived here.  Sixteen kids.  I thought I'd have little kids forever and ever ha.

Sounds like you're doing a great job as a mom! So good to hear about good kids taking responsibility for themselves!

Hi Della………..it’s lovely and sunny here and at 12.30 it’s 10C and a bit windy. You should see the leaves flying 🍁🍁🍁 hence the word FALL!! That bread and soup and cream puffs sound wonderful especially in a cool day. Home made bread is just way too good, isn’t it? When I was first diagnosed with severe gluten allergy I bought a bread machine with a GF function., because store bought GF bread leaves much to be desired at best!! So I baked away and ate away 🙄🙄 But I really don’t eat very much bread either. The kids do grow up fast! I can’t believe mine are 55 and 51………..oh my!! That makes me ancient!! But you are only as old as you feel, right? Sometimes I feel 104 😊

Have a good day!

0That bread looks SO delicious! I never have good luck with yeast. I think there is something in my chemistry that ruins it. The only way I can successfully bake bread is in the bread machine - because I don't touch the dough. I've said it before but you are superwoman. xo

Jan, thank you...you know it doesn't always feel like that around here ha.
Marilyn, I feel 99 sometimes, but sometimes I forget I'm old, until my knee unexpectedly twinges...ugh.
Terri, this bread is very easy, but I don't recommend that you try it, because then you have this fragrant delicious bread to try not to eat!