I admit it, I have ants in my pants, don't like staying home for more than one day at a time.  Today was a stay at home day though, and it's been glorious.  (Billie Jo (from Afternoon Coffee and Evening Tea blog)), I can totally relate!)

Today, I vacuumed a bit, did some laundry, and spent some hours in the kitchen.  See, I wandered around the yard, picked some pears from the pear tree, picked the last 6 or 7 grape tomatoes from the garden, and some summer and butternut squash.  So if you pick squash, and it's a beautiful autumn day, well, you have to EAT the squash.  The hard part is chopping and peeling it.  ugh.  It took waaaay too long, but it was enjoyable at the same time.  I also peeled and sliced 10 or 12 apples, I toss them in cinnamon and sugar, and bury them in sugar free applesauce from a jar...it's like apple pie, without the crust.  I cut up five pounds of red potatoes, they're in the pot of water waiting to become mashies.  I seasoned and marinated the pork loin roast, it's ready to go in the oven, with a tray of squash cubes, all seasoned with salt and pepper, rosemary, olive oil.  Then the pan of Brussel sprouts will roast while the potatoes cook. 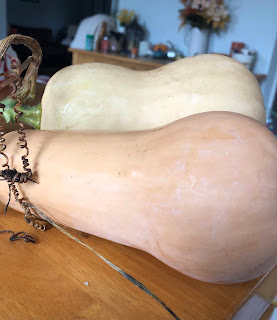 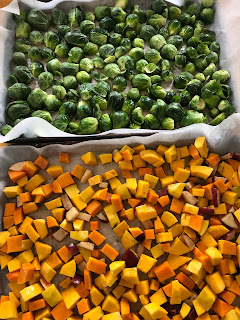 Margaret is coming for dinner, with her little boys (Adrian is in college, and also working, so he gets busy!). Abigail is coming over to join us, and to bring home dinner for Emily (she's working late), and Mariel.

Last night, we made two pizzas (I rolled out the dough, Camille did the rest).  Cam made one barbecue chicken, and one pepperoni.  (I had leftover chicken for dinner, and cauliflower rice).  I had to leave for activity club...Jonathan is an A.C. leader every other week, and it was his week, so he drove.  We brought little Miss Lydia, too.  Our group joined the older girls' group, and we painted pumpkins! 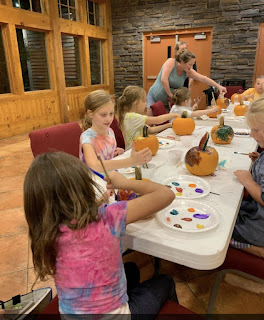 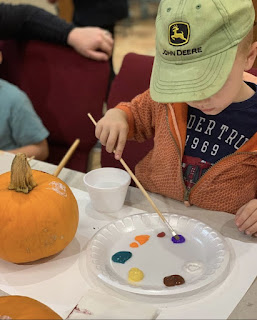 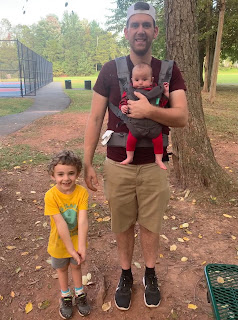 Grace just sent me this picture of Sam, my dear son Sam...he looks like Mr. Mom, with little Ruth in the carrier and Grant...Grant-y-poo.  Shh, they are moving from Virginia to New York next year, if it all works out, pray that it does!
Ooh, I feel accomplished, dinner is IN the oven!  The pork roast was in for ten minutes at 400, now it's on 350, and the applesauce is in, and the pan of squash.  I'll turn those potatoes on in an hour, and if the squash is done, put the Brussel sprouts in.  phew.
I am going to be gone this weekend, so maybe I'm making up for it.  Paul will be with the kids, and they'll have fun, but shh, probably not as much fun as I'll be having:).

Do you bake that apple pie sauce? How long? Your dinner sounds lovely. My husband and I went away for the weekend, and here it is Wednesday and I'm still getting caught up. It is difficult when no grocery trip happens over the weekend, and our weekdays are so busy. Have a wonderful day!
Valerie

I love how you do all that cooking for your family. Grown up or not, it sounds like they really appreciate it!! That little Grant is the cutest. :) I hope they can move closer soon.

Your dinners always ALWAYS sound SO good! A fun idea to do the apples and the applesauce! I still think you are a wonder woman! xo

Valerie, it seems there are times in life when...once you get behind on anything, it's almost impossible to catch up, and you just can't keep up with everything all the time...glad you got away for the weekend though, did you talk about the kids the whole time? Yes, I bake the applesauce, 45 minutes or so. It's good with pork roast, because pork roast is okay-good, but can be dry.
Joy, they do like when I make them dinner. Emily works at the hospital and sometimes picks up extra shifts, plus she does tons of meal prep and planning for things at church, so she's a busy girl...so I love to bless her with dinner once in a while. Mariel, same...she's so busy. And yes, Grant is a sweetheart, just like his daddy (momma too), but Sam was always the sweetest boy...
Terri, yes, the applesauce is extra good, like dessert on your dinner plate...

I read somewhere you can bake the halved squash in oven, then scoop out when done. No peeling necessary. I have never done it myself, though!

Are any of your girls stay at home moms like you or do they all have full time jobs?

No need to peel and chop the butternut. Stab it a few times with a fork, then put on a baking sheet whole and roast in the oven until you can dent it when you touch it. take it out halve it, and scoop out the seeds, then dust with a little brown sugar and cumin. Dab butter on top and return to oven for the butter to melt.

No peeling the squash, sounds amazing! I have actually made it like that, and I have a few acorn squash that I'll make like that, but I love the butternut cubed, doused in olive oil, salt, and pepper, rosemary, and roasted...mmm. It almost carmelizes.
Kristi, 3 of my daughters are moms. Molly works full time as a travel nurse, her husband stays home with the kids. Margaret works full time from home and takes care of the kids at the same time (her husband works too, and is in his third year of college for engineering), Kathryn, my Oregon girl, stays home with her two. Daughter-in-law Ashley, Ben's wife, stays home with hers, daughter-in-law Grace, Sam's wife, works as a teacher but is on maternity leave since having little Ruth Eleanor in August. (Emily, Abigail, Mariel all work full time and are single). Evelyn went to college and was working as a paralegal until she went out to Seattle to help out a family with a sick mama, she is also single.