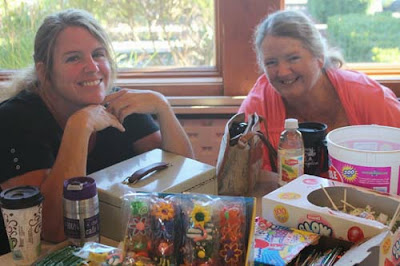 This is me, and my sister Cheryl, selling candy at the last church conference.

It is a rainy night, Paul and Sam are watching baseball. I have my laundry almost caught up. Dinner was a disaster tonight. The oven wouldn't warm up, so the chickens weren't done on time. I was taking the three youngest to the pool, we were meeting Abigail there. She called as we were backing out of the driveway and said the pool was closed. The kids were so disappointed, I decided to take them to town for a slice of pizza. I don't eat pizza, so I ordered twenty Buffalo chicken wings. I had four, Jon had two, and we brought 14 home. They were gone within minutes, and I felt bad there were so few for so many. I want to buy a big bag of frozen ones, but they will take forever to cook in the oven, at least until Paul fixes it again:)

Never a dull moment, I tell you.

Tomorrow...I am working at the Dome, for the basketball season midnight madness, season opening show. Not my fave thing to do, on a Friday night, but. It is with friends from church, and it is a fundraiser.

You and Cheryl are beautiful.
:0)