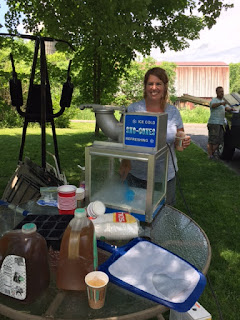 But first, let me show you a little bit of fun here...our yard this past weekend...with everything from the deck brought down as it was ripped up and rebuilt...it was blazing hot out, so I made sno-cones for the kids who were working so hard. Adrian, my son-in-law, is the master builder, and he is quite a guy. He doesn't lose his cool, he works so hard.

I've done my best to keep the kids hydrated while they work, and make sure they have good food. Last night, steak on the grill and pasta salad. Saturday night, grilled pork chops, fries, and green beans. Iced tea and ice cream, and lots of ice water, too.

It's not done yet, but soon! And soon I'll be setting the chairs up on our new, bigger deck! It's 12 feet longer now, and extends past the house, affording us a view of the pool, but also of the broken hot tub, wah, but that's another story. I am so thankful for this new deck, I cannot even put it into words. I told the kids they are never ever to get me anything for birthday or Christmas, again, ever. This is just too much. My treetop paradise, which I called the old deck, even though the kids teased me about it, this new one has yet to be named. But I know that it will be a place of fellowship and gatherings, and we will all fit now! So I am very thankful!!! 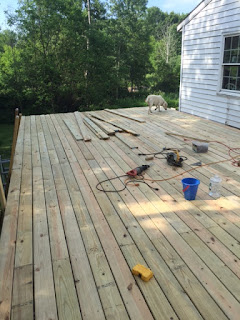 The dark line under the window is from the rail where the old deck ended. A line which Adrian joked would probably stay there forever, ha. 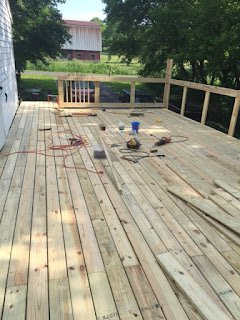 Adrian and Margaret are here now, so it may just get done today!!! And now, I am off to pick Sonja up from school...then in a few hours, Suzanne and Evelyn want to be picked up...the next week or so they have end of the year Regent's exams, so I'll be driving to the school a lot...
Posted by 16 blessings'mom at 9:31 AM

I love, love, love your new deck! You can probably easily get that mark off the siding with a pressure washer. And we picked up a hot tub for free.....

It is going to be amazing! Wow that is a huge deck, but with all those people you need that. You are getting a very hot time there and it is supposed to we a bit wet here for a couple of days. Something in between for us both would be better for everyone, wouldn't it? i love buying new towels! They are so thick and fuzzy 🤗 Have a really day Della!!