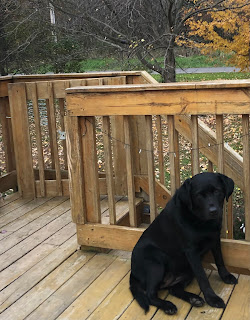 ...we had some nice weather yesterday, Suri likes just lounging on the deck, keeping watch. 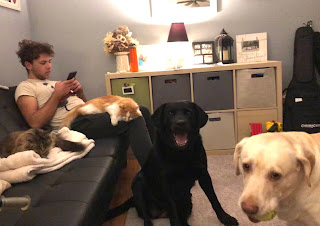 The Animal Corner...Kettler on the blanket, Orange Guy on Jonathan's lap, Suri, and Sunny with a tennis ball in her mouth... 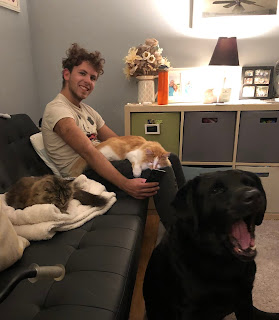 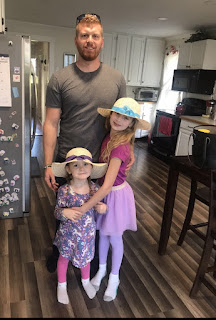 Benjamin Paul, our oldest son, such a good kid.  He is daddy to Miss Elise and Miss Anya, and shh, another little one is coming early spring.  Ben has a birthday tomorrow, Veteran's Day, always had the day off from school, lucky boy!   He has turned into such a nice young man, I am very proud of him.  He is honest, reliable, hardworking, and faithful to God.

We had activity club last evening, and oh those kids are cute.  Wulf can pedal now, and he was happily riding a tricycle all around the gym.  We are planning a Christmas party for them, such fun!

It's nice to have Samuel here this week, he's doing his last week in the Army Reserves.  I told him I want one last pic of him in his uniform, but he simply said, "Why?"  So, we'll see.  Am I THAT annoying with my picture taking?

We had a nice dinner last night:  burgers, hot dogs, and coneys on the grill, fries and tater tots in the air fryer, and I made a pasta salad, so yes, a summer cook out!  It WAS 55-60 degrees yesterday!   I had gotten tired of grilling by the time summer ended, but then I started missing it again ha.

Camille and I visited Molly and Josh, and little Lydia and Ophelia for a bit yesterday.  They have a nice apartment in a big old house in a nearby town, and recently expanded their space!  The downstairs neighbors moved, so they decided to rent that unit too, there was an old access door that was covered up with sheetrock, now it's open, and they have three floors of room to spread out in!  It's very nice, all redone and spiffy.

Friday morning, Mariel and I are flying to Oregon!  There are multiple reasons why this is a huge YAY for me, beginning with:  spending time with Mariel.  She is one of my dearest friends.  She's our fourth  child, although obviously grown up, comes after Benjamin.  (Emily, Abigail, Benjamin, Mariel, Joseph, Aaron, Molly, Samuel, Margaret, Kathryn, Evelyn, Suzanne, Sonja, Jonathan, (Robert) Charlotte Claire, Camille).   She's fun to travel with, she's always my roommate of choice when we're away for a weekend, because she sleeps soundly and doesn't hear anyone snoring, ahem.  She is good and kind and sincere and thoughtful, but she doesn't see herself that way, so she's humble, and so good.  She's an oncology nurse/nurse educator, and I am proud of her too.  (It's my blog, and I'll brag if I want to, ha...)

But going to Oregon means I get to see my Kathryn, my little Kappy-Sue!  And the little ones, Achilles and Rhys, and Darius!  It's a short visit, but I plan to soak in those cuddles!  I face time with them often, so hopefully I'll be familiar enough for them to snuggle with me rather quickly, as I haven't seen Achilles in person since June, and Rhys since August, but she's less than five months old, so she'll be fine.

As always, I hate to leave, in a way...I'm excited about what I'm leaving for, and whom I'm going with, but  leaving Paul and the kids here is hard...

Ah well.  I have to write Camille's report card...she's doing really well, hasn't gotten board yet...I got her lots of watercolors and canvases for her birthday, so...:)

It was 66* down here in Hornell. I hope and pray you have a safe trip to Oregon, my friend...oh and I wanted to say, and nearly forgot (in response to something you said on my blog)--NY doesn't have a religious exemption, you can thank the former governor for that. sigh

Hi Della ………..how are you this morning? Minus 5C here, but the sun is shining so gives the illusion of being warmer than it is! Love all your pictures. Animals sure know how to relax, don’t they? My 2 are sound asleep here………lazy as the day is long. So another little baby in the spring! How lovely 🥰 Lucky you. The family keeps growing. You will have a lovely visit with Kathryn and her family………baby snuggles…….ooooooooo🥰🥰 Enjoy your day!!

Oh, so hopeful for Ben and family ❤️ Such fun to have a baby coming. Have a wonderful time in OR!
Valerie

It was 33 degrees here this morning, they are talking snow this weekend!
Your visit with Kathryn will be wonderful, and so will coming home!
Congrats on another grandbaby on the way!

Safe travels!! Looking forward to photos of the littles! I always love your photos! xo