When you've been blogging for....ahem...fourteen years...you run out of creativity when it comes to titles. You just don't care.  You hit the publish button and realize that what you wrote had nothing to do with the title. 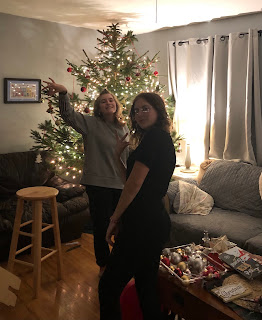 Miss Char and Miss Cam were our decorators this year.  They were going for a simple, old fashioned look, with lots of red and gold.  They strung red beads, and indeed kept it minimal. 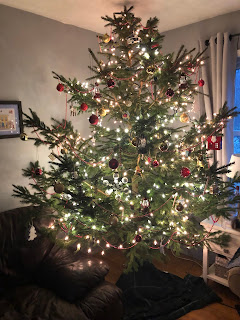 It doesn't look too bad!
Times do change though.  Jon was here, but wasn't too interested in helping, although he did have some comments and opinions.  Sonja K. was overwhelmingly busy with nursing stuff, in fact she came home from her clinical at the hospital while we were decorating.
Years ago, as old people are fond of leading stories with, we would get the lights on during nap time, and try to get things mostly done while the toddlers were asleep...I remember them waking up and oh my, a TREE, in the living room!  They would toddle right over and start touching it, of course.
For so many years we had so many children, they would fight about how many candy canes each could hang, and they would hang things all wrong, and I would fix it later.  I had a friend say that she refrained from fixing it later, nope.  ha.
Anyway, times do change, but the tree is up and done, and the rest of the decorations are out, very minimalist this year compared to how much I usually do...
Now, onto the sad doggie.... 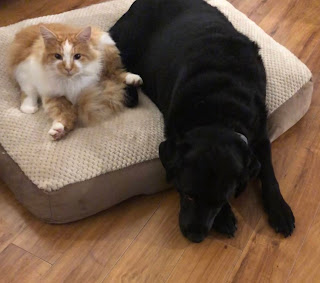 Orange Guy thinks the new dog beds are just for him. 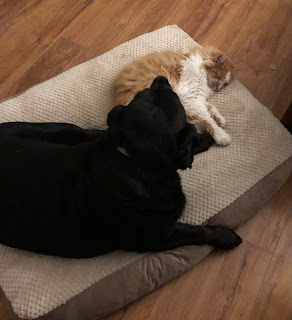 I do love how the animals like each other. 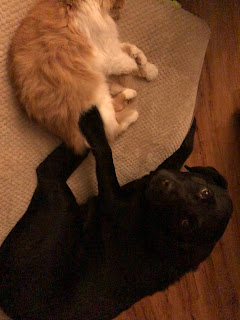 What?  Kitty on the bed and doggy on the floor?  Poor Suri!  Suri has a huge fatty tumor on her side, it just came out of nowhere, we noticed it last week.  We called the vet, and brought her in yesterday.  Well, after a needle aspiration confirmed it was indeed a fatty tumor, and not cancerous, the vet recommended we just let it go, keep an eye on it.  He said sometimes those tumors spring up and grow and grow to immense sizes, sometimes they just grow and stop and don't cause any problems.  But, the problem is:  removing them.  Sometimes they are nicely contained and come right out, but the area they leave behind, the empty space, with all the blood vessels, ect., can cause bleeding, infections, so these removals are avoided unless necessary.  Sometimes the tumors interfere with muscles, and make movement for the dog difficult.  So it would be a risk assessment decision.
Suri was so distraught by this trip to the vet, it's crazy.  She had to go in with the vet tech all by her lonesome, and it was worse than sending a new kindergartener on the bus, because Suri wasn't excited to go to kindergarten.  She looked so worried.  The vet's office is still not letting people accompany their pets, but the vet does call you and talk to you during the exam.  (I could hear Suri panting her Nervous Pant in the background). So she had to have that needle inserted, and I don't know if it actually hurt her a lot or just traumatized her, but talk about Drama Queen...she came home, and just sulked.  She didn't even approach me when I was giving out tidbits of bacon, I had to bring it to her!  Miss Piggy Pie herself!
She did go outside with Sunny this morning, then ate her brekky (which was her dinner from last night that she didn't eat, I added a bit of fresh chow on top of it to entice her), and she fell asleep right on the rug where the food bowls are, and has been sleeping there for two hours now.
The tumor looks bigger to me today than it did yesterday, but it could be because I'm worried about it.  I don't want it to get bigger, and have to make decisions.  After this behavior, I am not so sure I would want to put her through ANY of it, because what if she had that surgery and had all the things the vet said could happen...I just can't.  She doesn't understand it, and she's already mad at us.  She is the best dog that has ever graced this earth, shh, don't tell Sunny, but my heart...I know, I'm a Drama Queen too.  But dang, Suri is a gem.
We got a little bit of snow here, snow on the pumpkins... 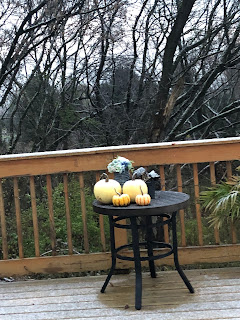 Today, my little granddaughter Elise is coming over to play for a few hours while her mama goes to the doctor.  Elise is four now, (and Anya is eight!), and she is going to be a big sister!  We're going to play with little things, and have some fun.  Tonight is activity club, and I am going to get a make-a-turkey-out-of-construction paper project going....
Never a dull moment...

So glad the tumor was benign I had a chocolate lab and a black lab who both developed them. It seems to go with the breed, I miss both dogs though it has been many years they always remain in our hearts. The snow looks pretty from here, I always screen up Adirondacks every morning and daikers and Stillwater had a pretty blanket. Wishing you a blessed day.

Your tree looks cute 🥰 I always call mine a Charlie Brown tree 🌲Last year I bought a smaller one to stand on the side table. I’m done with big trees……….We go to my daughter’s on Christmas Day and my daughter from Calgary comes up a couple of days earlier. I decorate it all pretty and it’s just enough for us now.

I know what you mean about taking the dogs to the vet. We can’t go in either and poor Bindi gets a bit stressed…..Hudson just goes in. I hope all stays good with the lump. My Tillie had a fatty lump for years, but it didn’t develop into anything worse, so fingers crossed 🤞 Thats cute that the kitty took over the dog bed 🥰

Have fun with Elise this afternoon 💞💞

It's always sad to see our pets suffer. I love the tree, although the ornaments do look a little minimal I love it! I am all about keeping it simple these days. I don't think I will be doing as much this year.

I've been blogging for 13 year so I know what you mean.
The tree is pretty.
Our daughter is having the same issue with a tumor that popped up on their dog. They say it's a fatty tumor too, but it seems to be getting bigger as well.

I’m so glad nothing serious for Suri!

My dog had to go into the vet for shots and I couldn’t go with him. I heard his howl from the waiting room and I asked the vet later if the shot was bad.. no, she said, he took the shot like a champion. He screeched when she clipped his nails!! (She’s known him since he was a pup and he adores her)

One of my granddogs is 25% lab, he had 2 smaller ones removed early last December. One by the heart and the other one I don't remember, but the surgery went very smoothly. He healed fast and he still has a small one by the kidney that has to be watched. His moping was when he had to wear the cone for a bit. He was 9 years old at the time. OH he also came home the same day.

Praying it goes the same for your sweet lab if you decide to have it done.

Betty, I honestly can't believe how much these dogs have captured our hearts. It's unreal. The Adirondacks, and east of Ontario get more snow than we do, and shh, they can have it.
That's funny that Hudson just goes in, Marilyn, how did they get such unique personalities?
Carol, I think we need a few more ornaments too, the girls love the way it looks, but maybe even another box of candy canes, I'm thinking...
Mari, thank you. These fatty tumors are not fun, they are better than cancerous tumors, but they can still cause damage if they get too big, but they don't like to remove them if they don't have to....poor pups. And poor us who love them.
Katie, I just don't like that we can't go in with them! We can't even go into the waiting room, we wait in the car...
Erika, that's encouraging that your grand-pup made it through so well! I'm glad to hear that! I need to be more hopeful, so thank you!

Your tree is very pretty! The girls did a great job! Sorry about your pup's problems. One of my cats is also dealing with tumors/infections. She is 13 or 14 and I'm not sure how much more I am going to put her through. It's tough. Love & hugs!

Terri, I'm sorry to hear about your kitty. It's hard because they simply don't understand. Suri was SO distraught about that vet visit. Yesterday she went outside in the morning, then came in, ate her brekky then fell asleep right on the rug near the bowls, and stayed there for hours...then when I vacuumed (she doesn't love the vacuum cleaner), she looked upset, so I urged/coaxed her to get on her doggy bed....she did, then stayed there until bed time, when she reluctantly went outside again, all limping and whining. Then, this morning she was much much better. The tumor is huge, so she does seem to effect her gait. I can't believe how quickly it came, and how big it got so fast. But the animals are such blessings, so thankful for them! Hugs to you too, poor kitty.