oh yes we did! 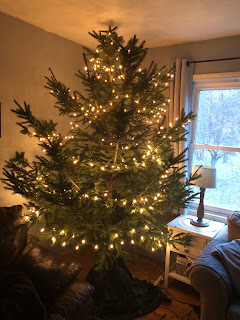 Okay, it's not the most beautiful Christmas tree in the world, but it's also not finished yet.  We like the look of the warm white lights, and only have two strings of them, so we'll get more.  It should be lower in the stand, more cut off, but Paul put it in there so it won't fall down, I mean it's IN THERE. 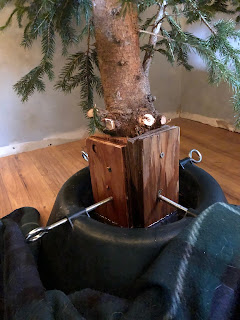 So you can see why I didn't INSIST on cutting a few more inches off.... 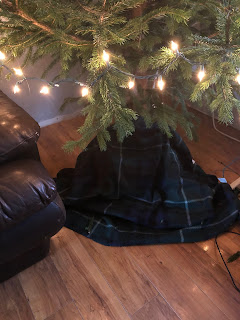 And, we cover it up with a nice little blankie... 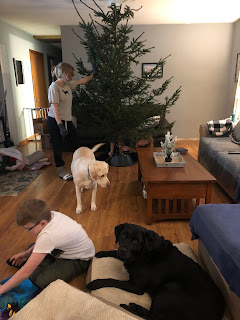 Davian was here for the afternoon.  If you look at the above pic, you can see Sonja peeking from under the tree... 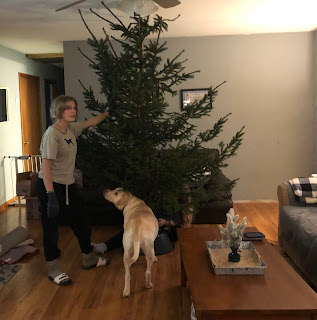 Sunny doesn't get why we brought a tree into the house. 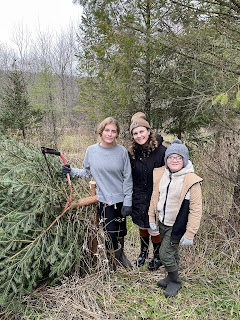 Char, Cam, Davian...Sonja took the pic.  They cut it down all by themselves.  They absolutely insisted it was time to get the tree.  Sonja said, "Dad said it was okay."  Well,  who am I to be the bad guy, right?  I am more of an after-Thanksgiving Christmas decorator, but last year we definitely started early, because we needed Christmas cheer.  They must've liked that, because they've been bugging to get the tree.  They went to a place where it's twenty bucks to cut one, and it's not easy to find a nice one, but that's where they wanted to go....

The decorating of it came to a standstill with the lights situation, but that's okay, after all, there are still 40 days until Christmas.

Dinner was bubbling away in the crock pot, I had put cubed up chicken breast with a packet of taco seasoning, and half a jar of salsa in there...we served it with Basmati rice, chopped red onions, tomatoes, fresh salsa, and sour cream, but a few of the kids at it in tortillas.

Davian liked being here.  He played with kinetic sand, the invisible man, and played Mario Cart on the Switch.  He loves the kitties and the pups. 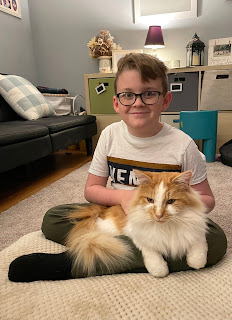 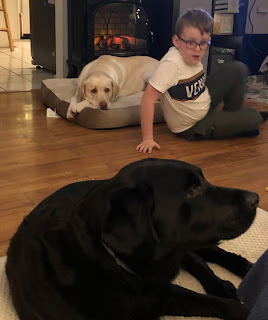 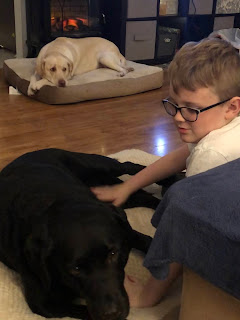 Margaret and Adrian were here on Friday night with the little boys.  Adrian tore up some of the cracked kitchen floor tiles and replaced them, so we had to tip-toe around them.  Well, wouldn't you know, one of the girls went in to get something out of the freezer, later after they had gone home...and a package of ground beef fell out, and bam, cracked one of the new tiles just installed.  We had to replace it ourselves, but Paul helped, he has tiled before.  We still have some cracked tiles, not all were done on Friday, but it looks so much better.
The plan is to get some new flooring one of these days, I really want the luxury vinyl planking, waterproof that looks like wood...a nice oak...but, I want the living room done too, to match, and the living room doesn't look so bad...it's a good quality laminate that really looks like wood...contrasting tiles in one room and wood-look in the other is okay, but if we get something closer in looks yet it's different, I just think it'll look bad...and replacing all of it is too pricey for us right now.  So, we got some tiles replaced, and are happy with that.
There will always be something.  Something on the list, the next thing.  You may have noticed in the pic of the bottom of the tree in the stand, that we don't have baseboard trim there.  It just never got done.  You can't really notice it, the living room is chock full of furniture.  What?!  We only put this "new" floor in like 12 years ago or so....
We can be so discontent about so many things, but we have a warm house, plenty to eat, despite what the teenagers say sometimes, running water (well water, but still.), comfortable beds...there is SO much to be thankful for!  I can compare my house to my friend's, or my sister's, or my brother's, and be SO jealous...never MIND Pinterest, or instagrammers, with their vast pristine wood trimmed farm houses, not a cracked tile in sight.   But envy is absolutely NOT something I want to be giving in to!  It's abhorrent to God!  So I truly say NO to that, and count my blessings.  (I am not saying I don't get tempted, or that it's wrong to have your house as nice as you can make it, to be comfortable in, to enjoy....I'm just talking about ME!)
We have to bring Suri to the vet today, she has a sizable lump on her side.  It's hopefully just a fatty tumor, which Labs are fond of acquiring, but we want to get it checked out.  It's not a good idea to fall totally and completely in love with animals, oh dear.
Thanksgiving is coming up, and we're going to Ben and Ashley's house, as they have lots of room for us all.  My pie list:  4 pumpkin, one blueberry, and 3 apple.  Davian is invited over to help make pies the day before Thanksgiving, he says he loves apple pie and thinks about it every day, and loves to help make it, so he gets to bring one home.  Abigail is making a lemon meringue with Camille, and Ashley is making chocolate.  The pie feast is real, with us.  (The kids still tease me about last year:  I made one sugar free apple pie, and mistook it for a regular one, cut a sizable slice, and sat there raving about how good it was, tasted just as good as regular pie, and dang it, it WAS regular pie!)
No nice and cozy post is truly complete without inserting something like this:  think about censorship.  Just think about it, do you notice it?  What happens if someone speaks out against the mainstream these days?  Are they shushed, canceled, discredited?  What happened to the land of the FREE?
Here's something happy to end with...my little granddaughter Rhys Harper, from Oregon... 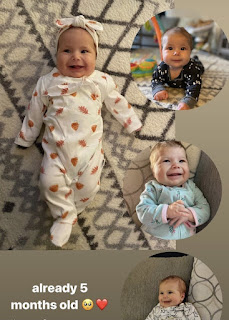 Oh boy...there are a lot of folks embracing Christmas early this year (lololol). Thanks for the many smiles, Della. I hope you have a beautiful day, friend...and yes, this cancel culture is something else (rolling eyes).

Hi Della 👋 I think your tree is great……and once it’s decorated it will be beautiful 😍 I hope everything is good with Suri too…….yes we love our doggies so much. Our Hudson is getting old and has issues that cost a fortune every month, but we’re not ready to say goodbye yet. He’s still happy, gobbles up his food, loves treats and loves his walkies even though they are not very far or fast. A slow shuffle and he sniffs every blade of grass. My goodness that’s a heap of pies you will be making there! Wow!! And that baby girl is just a dolly……….oh my goodness ,be still my heart ❤️ She looks so cuddly and snuggly 🥰

Have a great day! We had our first real snowfall yesterday. Not a lot, but it’s still there 🥶🥶🥶

Rhys is ADORABLE!! How I envy a big noisy family-filled Thanksgiving!! Wishing you a good week ahead!! xo

Your tree is so pretty! I like warm white lights too. It will be gorgeous when you are done.
Your supper sounds good. I make something similar with whole chicken breasts in the oven.
Your grandbabies are adorable!
And yes to your censorship comment. Sad times...

Hi Della! I have a super random question - with so many grandchildren, do they like reserve grandkid names? Or have you just all sort of figured that if there’s two Elizabeths or Johns, it’ll all be fine? Just something I wondered..