what?! is this mulberry street? 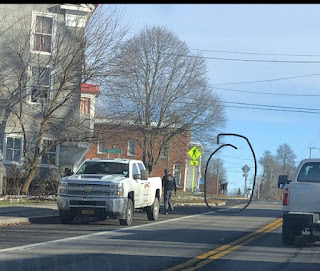 Yesterday, we were going out and about, and what the heck?  A horse, trotting down the sidewalk in town! 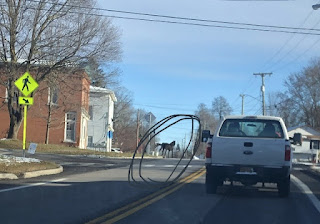 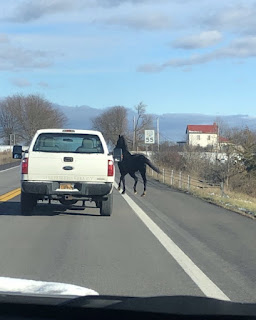 We followed cautiously as it skittered here and there down the road, the guys in this truck were being ever so careful...one of them was on his phone, so we figured they were calling someone to help catch this poor creature.  When we got to the farm house in the above pic, horsie turned and ran up the driveway...hmm, you never know what you'll see!
So we did some Christmas shopping, and oh my goodness, embarrassing:  my card was declined.  Someone had hacked me, tried to buy $300+ worth of stuff at three in the morning the other night.  I got a notice from the bank, but when I called back, after going through all the prompts..."please call back during regular hours when we're open..."okay.  So I thought maybe it was a phishing call, and forgot about it.  Well I remembered it in a hurry when my card was declined at T.J. Maxx!
I was still able to go to Target, as I have a Target card...I had ordered a few things to pick up, because when you do order-pick-up, you get some deals!  25% off shampoo we needed anyway, plus a $5 gift card if you buy four.  I also needed dog chow, and there was a $5 gift card if you bought two.  They had only one bag in stock, but gave me the gift card anyway!
After Target, we met a lady in a parking lot...it feels so sneaky and clandestine to do those marketplace transactions, but at least this time I didn't approach the wrong person....last year I bought a ride-on toy...and the lady who came and parked next to me, in the same color and make of vehicle the person I was supposed to meet, well, I got out and started to hand her the money, she looked at the money and at me, and was so puzzled...oh dang, I said, you're not from marketplace, are you?  no, indeed she was not.   So I had the right lady this time, and got myself a nifty little toy traffic light, for Wulf for Christmas, ten dollars.  :)
Then this fine morning, Camille and I decided to go to the library, then the thrift store, because hey, I get 25% off on Tuesdays.  Well, driving through a nice little neighborhood on a semi busy street, a red pick up truck drives right down a driveway and straight into the road, across the road right in front of me, hits the tree on the side of the road, and comes to a sudden stop, the dog in the passenger seat just sitting there all happy and dumb, until the impact sent the poor thing scrambling...no one was driving.  Nope, an empty driver's seat, and that truck parked right across the entire two lanes of that road.  I laid on the horn, until a guy came running out, got in, backed it back in the driveway, and off we went.  I hope the pup was okay!
Anyway.  Fun fun fun.  I'm leaving now to go watch Elise while Ashley goes to the dr....I'm bringing our CandyLand game, and some fun craft stuff.....bye for now!

Do you always meet at a neutral place when buying something off of Facebook Marketplace? Here, the sellers just leave the items on their front porch and you put the money under the doormat, or they come outside and we chit-chat for awhile. I think I have become hooked on purchasing things from Marketplace...I can always find some toys or books that my little grand daughter couldn't live without!

(Smiling and giggling) you most def. do not lead a boring life, my friend.

Well those are some interesting little “adventures” lol.

I think you were on Mulberry Street! Crazy to see both those things in one day.

Laurie, I LOVE Marketplace, I've gotten some super good deals...last year, we went to get a balance bike for Wulf, it was a $150 bike, she sold me two for $35! He has one for home, and one to keep here. I've gone to people's houses before, and sometimes a store parking lot. I always mention when I offer to buy the item that I'm a grandma, or that I'll be with a few of my daughters. Ben and Ashley were looking for a new dining room table and chairs, and it was at least $2500 in the furniture store: nonsense, I said. I found one on Marketplace within a few days for $200, and when Ben went to pick it up, the owner gave him a matching couch and loveseat, in excellent condition, for free, because he was moving...!
Linda, I do not, I guess!
Michelle, I know, I am thinking I should prob stay home tomorrow!
Mari, it was yesterday for the horse, then today for the doggy truck passenger...should I stay home tomorrow? I actually have to get up at four a.m. to drive Jonathan and Camille to the airport....ugh.

Oh my goodness! I think I would have gone home and climbed into bed! Wow, what a day you had! Hope you got the card thing straightened out with the bank. You will have to share a picture of that traffic light. Sounds so cute! xo