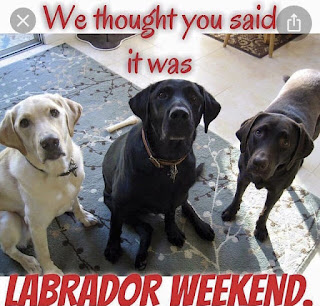 Around here, it's always Labrador weekend.  We only have two now, so we sort of need a chocolate one...
Kathryn is here, and I don't even have a pic to show you, because she arrived in the morning after flying all night with a small baby...even if the baby slept, did she?  No, she did not.  This fine morning she is still a bit tired, battling a headache, so I'll keep the camera out of her face:) 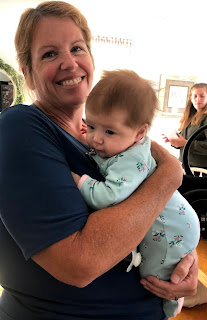 Kathryn is in the background of this pic...and we all want to see Rhys, anyway! 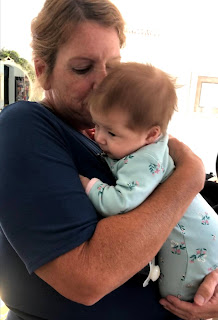 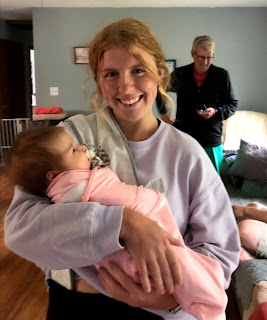 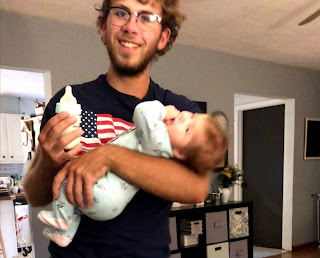 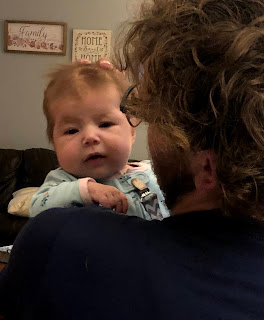 So today, I had to get up early and take a Walmart run...Miss Charlotte Claire has a reaction to poison ivy, so I had to pick up a 'script, which they had no record of, so I have to go back later.  I needed a bag of dog chow, and some diapers for little Rhys.  She's only here for such a short visit, leaving on Monday morning, wah.
I had to hurry home because Paul needed the truck, Sonja took my car to college.  We're having a little birthday party for Tennyson today, he's one year old!  I made cuppy-cakes last night, and we'll make buttercream frosting soon.  We wrapped a few presents, made gift baskets for the other kids, and blew up some balloons.  We're having a cookout, burgers and hot dogs.
So much going on, but here's something REALLY interesting:  Camille Anaya is going to homeschool this year!  She has been mulling and thinking on it, and has decided.  She plays the violin, and likes to have time for it, she wants to learn Japanese, she loves being able to draw, and paint, and read...so go for it, Cam!  I totally support it.  I admit, it's hard in a way, because this girl had a one hundred average for the entire year last year.
Anyway, we're solving the world's problems right now...second cup of coffee and all...

I'm pretty sure those are my sister's dogs LOL. The one on the right, Amelia, passed away recently from cancer. She has a bittersweet rescue story.

What do you have to do to homeschool in NY? Submit your lesson plans? Obtain special permission? Beautiful sweet baby, glad you got to cuddle:)
Valerie

Visiting here is like catching you on the front porch with some iced tea and catching up with all that is going on. Girl, I still don't know how you do all that you do!! Sure enjoyed your post!! xo

Terri, one day perhaps we can sit on a front porch and have some iced tea. I love chatting with my blogging friends.
Valerie, you submit an intent to homeschool, the school sends a letter acknowledging that and requesting your lesson plan for the year. I have a rough outline of what the state requires, I give a very generalized plan in each subject. Four times a year I send in progress reports, then for high school kids, a state test every year in June.
Mert, tell me the rescue story! I'm sorry for her loss, Labs are such people dogs, they think they're people too. They are just so in tune with us.
Sandi: yes!