We are postponing our trip indefinitely. But, as far as I know, I am still going to California next week.

Disappointment, certainly, but seriously, I feel better. The unease of the possibility of getting quarantined there, because, Maui IS an ISLAND.

The good news is this: Kathryn and her little guy Achilles will be there visiting too! I get to see my grandson!

Today, Lydia and Anne played together nicely. Lydia spent the night, then Anne got here this morning and we started with making pancakes...they just added the water and helped stir. I put rainbow sprinkles on them, so yay! 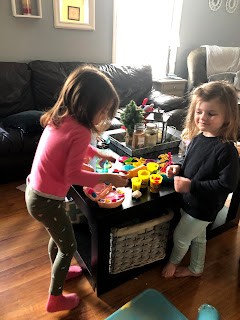 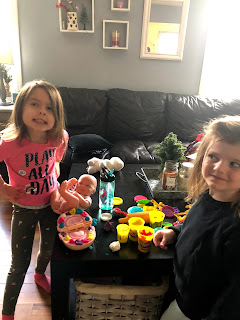 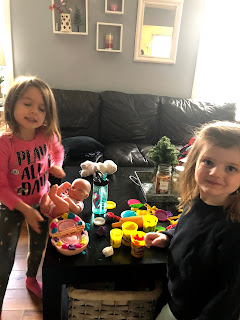 They had too much fun. Lydia had to go to the bathroom, so they brought the glow stick in there and turned out the light, oh dear. They built a fort with couch pillows and blankets, and played in the play tent. They had snacks and helped make pizza, played with play dough for over an hour, and played with dollies. We played two games of matching game. Lydia had to go home, Josh came over with baby Ophelia for a little visit, Mali is back to work. When it was time for them to leave, Anne was very sad. So I read her six story books from the library.

Dinner was our afternoon pizza, a pepperoni, a cheese with tomatoes and sprinkled in olive oil, and a fathead pizza, which is Keto, made with an almond flour/mozzarella crust. (3/4 c almond flour, 1 1/2 c mozzarella cheese, 2 tablespoons cream cheese, one egg, a sprinkle of garlic powder, a bit of crushed red pepper,)(melt the cheese, add the almond flour, then the egg, knead or mix in a kitchen aid, or just stir with a fork)(I roll it between two pieces of parchment, then take the top one off to bake for 10 minutes or so...then I put olive oil on it, flip it over, and top it with sauce, cheese, bacon, eat, then bake it more until brown and bubbly). It's not REAL pizza, but it's pretty darned good, and quite filling.

Paul surprised me with a new hand mixer, a Cuisinart. It's red, and it came with some handy dandy cupcake-takers, plastic containers for bringing the cuppycakes along. I have had a long history of bad luck, with mixers. I ordered a Kitchen-Aid from Kohls at Christmas time last year, it burned out. I brought it back to exchange it, but they only sold them in stores at Christmas, so I had to get a refund. I bought one at the thrift store, it lasted a while. I bought one for like twelve bucks, a Toastmaster, and it burned out. I threw it in the garbagio, but I should have taken it back to Kohls. I do have the nice KitchenAid stand mixer, the 4.5 qt bowl one, but it does not make a triple batch of cookies. The wire whisk beater attachment broke on it, Paul the wires started coming out. Paul ordered me a new one of those, too, just the wire attachment.

And then there is the Corona virus. Is it terrifying, or is it just a big nothing? I go back and forth on this. On the one hand, China. There was/is so much turmoil there, it must be quite awful. I do fear that government officials will take this opportunity to nix more rights from people. The mayor of Seattle, the governor of New York, asking for more power, to make emergency decisions, it ain't right. They have enough power as it is. And if and when this thing fizzles out, will they give the power back? It's like the Patriot Act.

I read about the projections in the good old U.K....I tell you, people will be losing MORE rights.

Ah well, I have to write excuses for my kids being absent from school yesterday...they are MY kids, but whatever. They will get in trouble if I don't write them...

And, a pic from nine years ago today, my littlest princess, Camille Anaya: 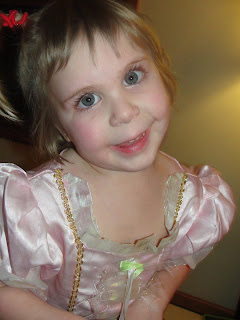 What a little sweetie Camile is. Cute!

You are the first person I"ve heard have a problem with mixers. I was happy ? to read you have troubles with the stand KitchenAide , too. I had the smaller one and it broke. My sis bought me the big one 2 yrs ago and the wire mixer attachment broke! And if I make a double/ triple batch of Italian cookies with it .. it seems to smelll like its burning! Frustrating. I know one thing, if this one breaks completely I won't buy another one. To expensive to not be happy. But I wouldn't hurt my sister because it was such a beautiful gift!

Sad you had to cancel your trip, but what are the consequences of going? A ton! A good choice and just think, you can save a ton more money now for a even bigger trip! :)

Rose, maybe I bake entirely too often, ha. I agree with the KitchenAid being too expensive to replace. ugh.
Canceling the trip is sad but sort of a relief, but I am still flying to San Francisco, my son lives in Walnut Creek. He has a nice pool and a hot tub, so I think I'll be vacationing in a good place still. The Hawaii trip is postponed, so hopefully things will straighten out and we'll be able to go sometime in the future.

My parents are supposed to go to Italy for three weeks in August, and are currently in a wait and see situation. They won't lose anything if they cancel, but really want to go since it is their 45th wedding anniversary trip.